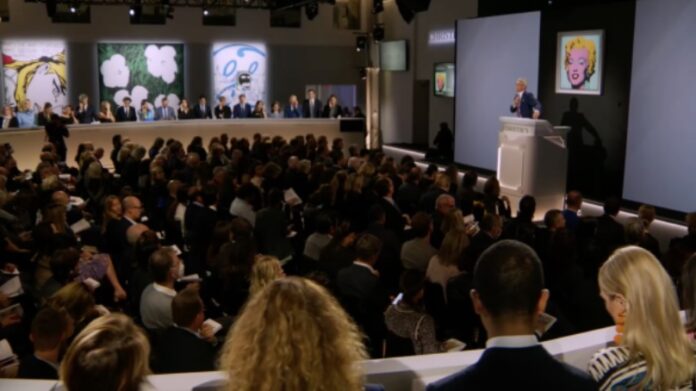 Following the opening of New York Art Week that brought several fairs back to the city after pandemic-related delays, 36 works from the collection of the Zurich sibling art dealers Thomas and Doris Ammann brought in a total of $318 million at Christie’s New York on Monday evening. The grouping’s total fell squarely within its presale estimate, which valued the collection between $284 million and $420 million.

Many of the works sold Monday night had been held in the Ammanns’ collection for nearly five decades. The late brother and sister founded Thomas Ammann Fine Art in 1977; Thomas died in 1993, and Doris in 2021. The enterprise was known for introducing American artists active in the postwar era to European collectors. The Ammanns helped find a wider audience for now blue-chip artists like Andy Warhol and Cy Twombly.

Two lots—a 1986 abstraction by Sigmar Polke and an all-black painting by Brice Marden from 1967-68—were the only ones that failed to find buyers. None of the 36 lots were backed by behind-the-scenes financial deals, commonly known as guarantees. Proceeds from the sale will benefit the Ammanns’ Zurich-based foundation, which distributes funds to causes related to education and health care for children.

Christie’s veteran auctioneer Jussi Pylkkänen took the rostrum on Monday to lead the sale, which began just after 7 p.m. and lasted two hours. Taking place at the auction house’s redesigned auction stage at its Rockefeller Center salesroom, a packed room of quiet onlookers attended the event in anticipation of a Warhol portrait, the evening’s final lot, that was poised to fetch $200 million.

As the evening’s bidding began, Russia’s currency, the ruble, was noticeably absent from Christie’s screen of online bids displaying various international currencies; that absence comes amid the country’s continued war in Ukraine and economic sanctions that have ostracized wealthy Russians, some of whom rank among the world’s top collectors. Bidding from Hong Kong was less active than in previous sales, as the city is only just emerging from a deadly wave of Covid-related deaths that had forced it back into lockdown.

The sale’s top lot was none other than the highly anticipated Warhol, a 1964 portrait titled Shot Sage Blue Marilyn, which depicts a press image of the actress from her 1953 noir film Niagara. After prolonged stretches between the lot’s initial bids induced silence, laughter broke out among the sale’s attendees in a collective sigh of relief when bids shot past the $100 million mark.

After bids from four clients—three on the phone with specialists and one in the room—the silkscreen painting eventually hammered at $170 million. Going for a final price of $195 million, it was won by mega-dealer Larry Gagosian, who was bidding from the third row. The work set a new record for Warhol, surpassing the Pop artist’s previous auction record of $105 million paid for his Silver Car Crash (1963) in 2015.

The hammer price for the blockbuster lot was $30 million below the expectation of $200 million, which Christie’s set as the presale estimate upon request. Though some expected the painting to breeze past its $200 million estimate, experts following the sale said the price aligns with recent benchmarks set in private sales. (Another one from the “Shot Marilyn” series is known to have sold privately for $220 million.) “I think it was right where it should be,” New York art adviser Erica Samuels said of the final price during an interview with ARTnews after the sale.

Earlier in the night, Cy Twombly’s flesh-toned abstraction Venere Sopra Gaeta (1988), a work on paper, sold for $16.9 million (with fees) to Gagosian, who beat out a bidder on the phone with Christie’s co-chairman of the 20th- and 21st-century art departments, Alex Rotter; the winning bid was $14.5 million. The lot was estimated to fetch $10 million. A second untitled canvas from 1955 by Twombly sold for $18 million, also against a $10 million estimate.

Another big-ticket item that came to the sale was Robert Ryman’s ca. 1961 untitled monochrome off-white canvas, which had been in the Ammann’s holdings for 40 years. It sold for a final price of $20 million, hammering above its estimate of $15 million. A second silkscreen produced by Warhol in 1964, Flowers, featuring four white hibiscus blossoms went for $15.8 million, going to a bidder on the phone with Christie’s head of client advisory in New York, Jennifer Wright.

Francesco Clemente’s vibrant 1981 canvas The Fourteen Stations, No. XI attracted 18 registered bidders before Pylkannen opened competition for the lot. The painting, featuring four figures in an embrace and painted in black, white, green, and pink tones, hammered at $1.5 million after a bidding spar between Christie’s Hong Kong specialists and a bidder in the room, whose paddle number was not revealed. The painting sold for a final price of $1.9 million, 23 times higher than its $80,000 low estimate.

At times in the evening, Pylkkänen’s charismatic quips helped alleviate some of the tension among audience members. In anticipation of a 2003 canvas tilted I Wasn’t Sorry, featuring three birds perched on a branch by contemporary artist Ann Craven, Pylkkänen said, “It’s going to fly.” The work sold for $680,400, 34 times the $20,000 estimate—a result that Samuels told ARTnews was unexpected for the mid-career artist.

Lucian Freud’s intimate portrait of a sleeping naked subject, Man Resting (1988), went to a bidder on the phone with Sophia Zhou, Christie’s Chinese painting specialist, for $1.5 million, hammering at the low estimate of $1.2 million.

Four bidders competed for Sturtevant’s Lichtenstein But It’s Hopeless, a 1969-70 appropriation of one of Roy Lichtenstein’s comic book-style paintings. It went to an online bidder for a final price of $2.22 million. The result was more than three times the estimate of $600,000 and the third-highest price achieved for the artist at auction. Following a similar course, Mary Heilmann’s 1983 purple, black, red, and white abstraction went for $945,000, more than six times its $150,000 estimate. It went to a bidder on the phone with Impressionist and modern art specialist Max Carter.

Bidders from Connecticut, Colorado, and New York competed for Ross Bleckner’s untitled 1988 canvas featuring a minuscule hummingbird hovering against a set of chromatic stripes. At five times its $50,000 estimate, the painting’s final price of $277,200 surpassed the artist’s previous record of $192,000, set back in 2006 for the sale of his 1984 canvas Oceans.

Though the energy of Monday’s sale was low, the results marked a solid start to the traditionally tense opening of the marquee May auctions in New York. The dynamic of the sale—where bidding energy for less-collected but long-established contemporary artists rivaled that of 20th-century global brands like Twombly and Warhol—is one that Samuels described as telling of the market’s hunger for contemporary works “adjacent” to masterpieces. She added, “If the sales can shine a light on some of the artists that haven’t been over-collected or seen far and wide, maybe it’s more of a service to them.”