Home News ‘It’s About Me as a Blind Person and Painter’: How Artist Manuel... 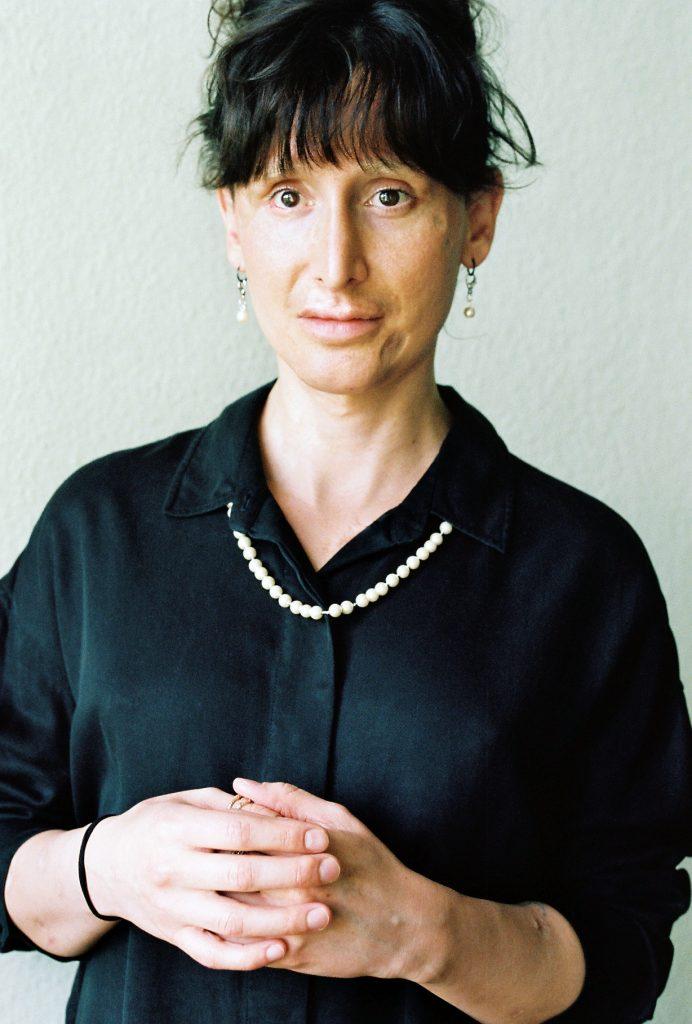 Throughout their career, Mexico-born, Berlin-based artist Manuel Solano has returned to painting bodies of water many times. Capturing the interplay of light and movement across the surface of a lake or pool was tricky enough in the years before they became blind from an HIV-related illness in 2014. Now, each attempt relies on memory.

Back in 2012, in the immediate aftermath of their illness, Solano felt lost. They had just graduated from the BFA program at La Esmeralda in Mexico City, a period during which they recall being more interested in music and scrolling through Tumblr than the curriculum.

Then, just as they began to develop their artistic practice in earnest, they suddenly found themselves in a seemingly hopeless situation, forced to start again.

The earliest project to come out of this period, Blind Transgender with AIDS (2014), is a wry and defiant body of works on paper. Produced by hand, each small-scale study is eloquently rendered in just a few colors.

Their defiant spirit is captured in Giving the Finger, in which a hand flipping off the viewer projects out against a blank background with a tiny black sun. “I wanted to give the finger to everybody who could look at this painting, just because they could look at it,” said Solano. 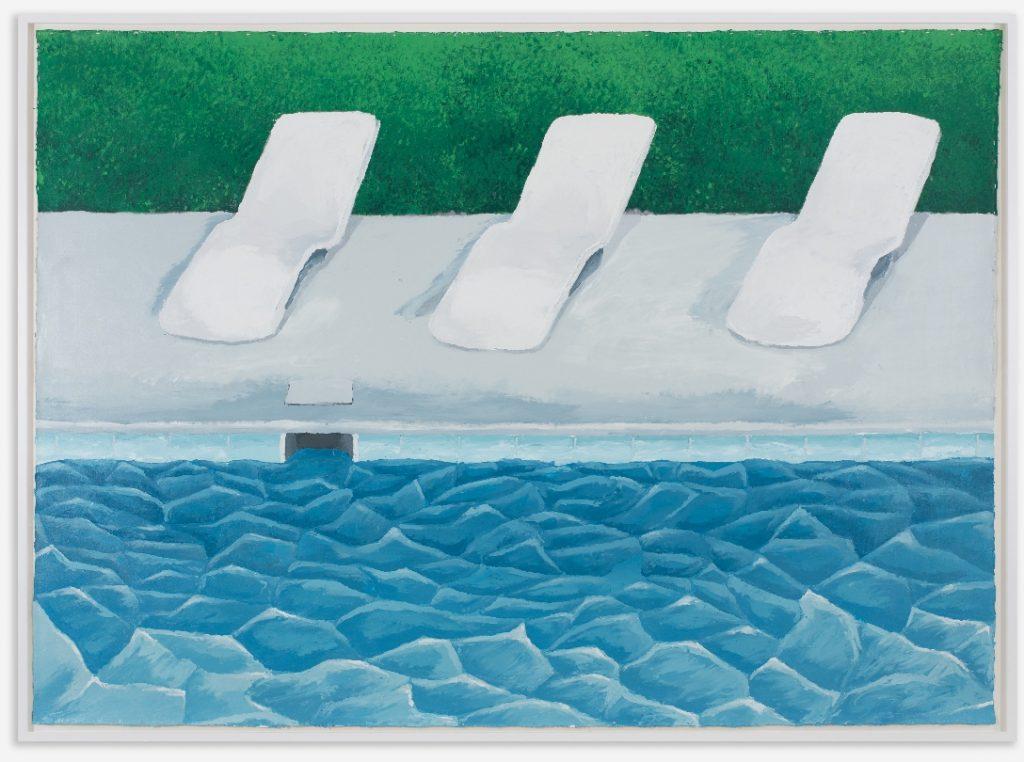 Working out how to paint again in the years following their illness was “a constant process of coming up with creative solutions using other senses,” a journey that is well documented in a new solo show at Dundee Contemporary Arts in Scotland.

Today, Solano works with a team, which they must guide with detailed instructions as they themselves are in turn guided across a canvas that has been divided up into a tactile map of pins, strings, and pipe cleaners.

For (2021), a tightly cropped study of a vacant pool, Solano created a highly expressive surface of water by communicating its structure as a plain of valleys and mountain ridges. Once these were marked up by their assistants, Solano was then able to navigate this expanse with their hands and fill the gaps by applying paint directly to canvas. The unique process is reflected in the exhibition’s name: “The Top of Each Ripple.”

Solano is quick to point out to me, however, that inevitably the painting is not really about perception. “It’s about me as a blind person and painter—how well can I capture such a challenging thing to paint?”

As for the row of three chaise lounges in the painting, sitting at the border of the water, these are another motif in Solano’s work and refer to a childhood fascination with these items of furniture. “They were very stylish, and they shaped my sense of what is chic.” 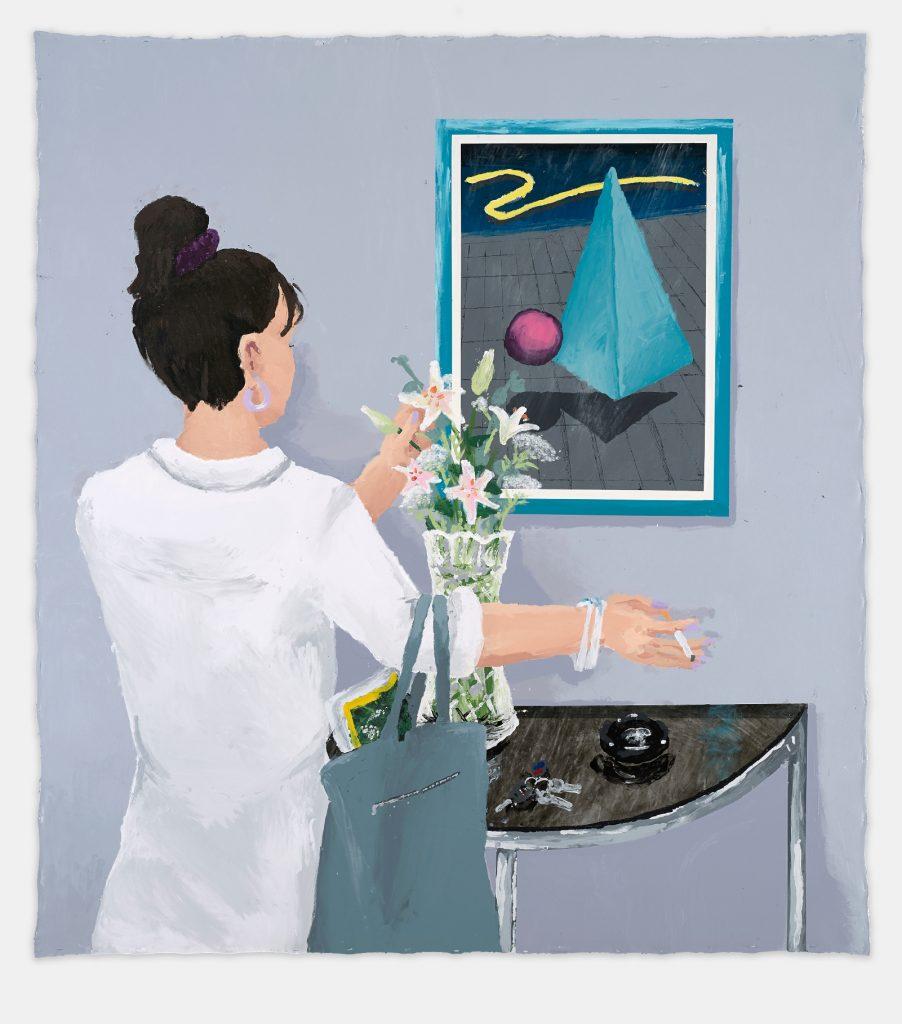 Fragmented but vivid visions such as these one can be found in many of Solano’s works, including Bangles (2020), inspired by the accessories worn by Solano’s mother, and Liverpool (2020), a chain of department stores they used to visit in Mexico. Paintings like these have become a way for Solano to work through the jumble of images in their head.

Growing up, Solano eagerly soaked up pop culture, becoming obsessed by icons like Michael Jackson (“more as a character than his music”), Alanis Morissette, and Björk. Early on, they had an interest in drawing caricatures of female celebrities like Naomi Watts, Charlotte Gainsbourg, and Uma Thurman.

“I have a knack for noticing little details,” Solano recalled. “Ever since I was a little kid I was very good at doing impressions and imitating the way people talk, their facial expression or the way they move.” Many of the artist’s works since have been warm or tender portraits like Oronda (2018), a tribute to their glamorous great-aunt. 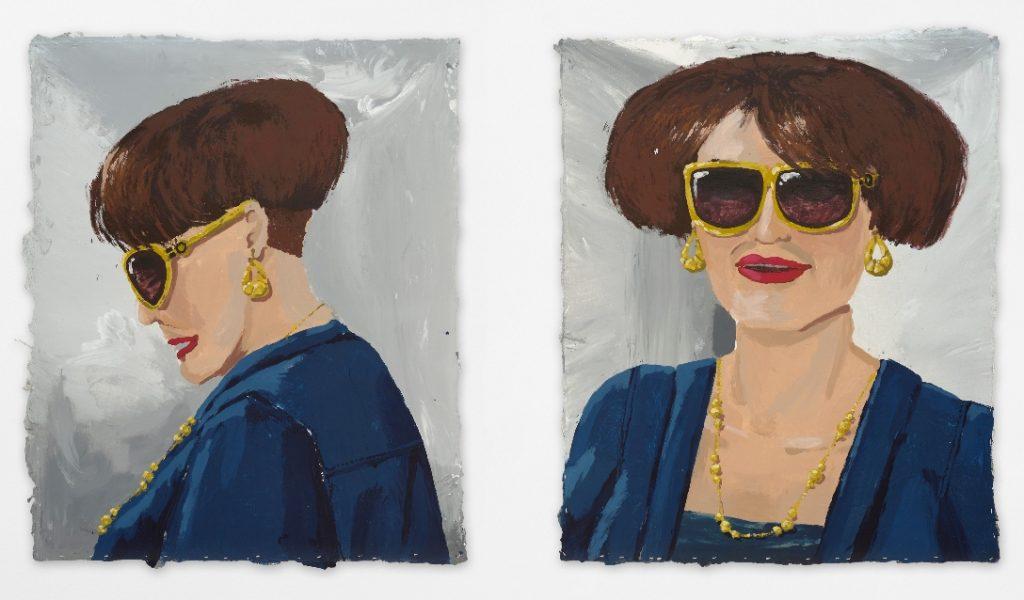 “The older I got, the more I realized that all of my work is one work,” Solano said. “It’s all about myself in one way or another. I always put things in my work that I see in myself and have then found in other people and places, so that even when I’m portraying others, I’m actually portraying something in myself.”

The exhibition also includes three of Solano’s video works that are more obviously self-portraits. La Patita (2020), for example, is a compilation of old home videos from childhood.

Masculina (2018), filmed on the streets of Miami, takes its name from a Spanish term to describe a female who has male attributes. Solano tells me they are now in a more feminine stage of life, but that “it depends on the time of day.”

“I don’t think about those terms really,” they added. “I just hate having to define myself.”

The more time spent with Solano’s work, the more intimately a viewer becomes acquainted with an individual who far exceeds the box that Blind Transgender with AIDS was once, bitterly, attempting to break out of.

“I guess you could say my work is a means of communicating with other people about who I am,” they tell me. “I hope other people will see who they are, but that’s not for me to know.”