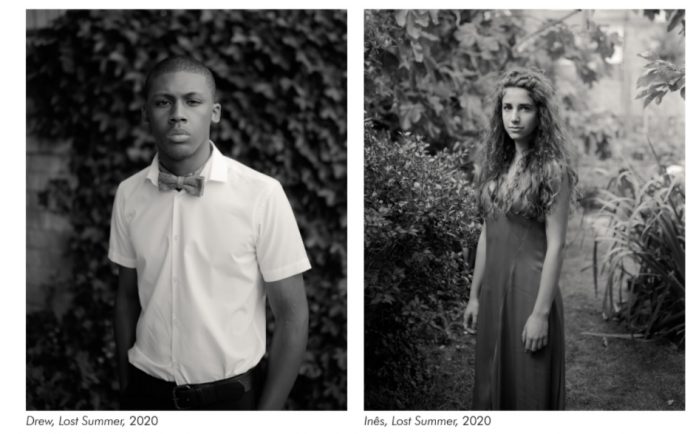 HackelBury Fine Art, London is pleased to present ‘Lost Summer’ a solo exhibition of new work by Alys Tomlinson. The Lost Summer series consists of Tomlinson ́s recent prom portraits photographed in June 2020 as lockdown eased and is accompanied by ‘Night Wanderings’, taken during lockdown as part of the artist’s daily exercise. The prom portraits capture the poignancy of a lost summer for teenagers who were unable to sit their school exams or mark this significant step in growing up and leaving school.
With school proms cancelled due to the Covid-19 pandemic and the easing of lockdown, Tomlinson photographed 44 teenagers near her home in North London, all dressed up in their prom outfits. Instead of the usual settings of school halls or hotel function rooms, she captured them in their domestic outdoor spaces, of the gardens and streets where they live. They represent a loss and longing, but also celebrate each teenager as an individual, navigating this extraordinary time.

Lost Summer began as an idea when the artist was frustrated that she couldn’t travel to work on her existing projects. Once lockdown eased she began to move around her neighbourhood photographing the teenage children of local friends from her street and the surrounding area and posted them on Instagram. As word spread, so the project grew and the significance of the subject matter became more apparent as summer evolved. With the A-level results fiasco in August, this project has taken on an even greater meaning with the disruption that these teenagers now face. They have not only dealt with a lost summer but confront an uncertain future.
The prom portraits are a testimony to the resilience of these young people. There is an intensity in the gaze which meets the viewer and suggests an untold narrative which is yet to be revealed. The portraits of Drew, Ines, Jack and Jameela are self-assured and defiant, yet they also suggest surrender and courage.

Tomlinson is interested in the relationship between people and place and in much of her work she explores the recurring themes of loss, ritual and belonging. In her critically acclaimed series ‘Ex- Voto’, portraits of religious pilgrims are often set in sacred outdoor spaces and in the ‘prom series’ these outdoor settings remind us of the calming and transformative quality of nature. The prom portraits represent a merging of two worlds – the inner and the outer, the psychological and the physical.
Alongside ‘Lost Summer’ Tomlinson will show work from her ‘Night Wanderings’ series, which focuses on night-time London during lockdown. Inspired by the American photographer Robert Adams’ series of nightscapes in the 1970s called Summer Nights, Walking, she undertook a series of wanderings where she lives in Holloway, north London. The photograph ‘Untitled 1’ taken near the Emirates Stadium contrasts the sanctuary of the home with the hazard of the street – a metaphor for lockdown living.
These images are unsettling in their emptiness with figures lurking in the shadows and the artist admits to feeling uncomfortable whilst taking these photographs in deserted London streets.

Lost Summer is an exhibition of its time representing untold stories and unfinished chapters following on from the complex effects of a global pandemic on individual lives. Yet by choosing to use black and white photography Tomlinson achieves a simplicity, which give the images a timeless and ethereal quality. A book of the portraits will also be published to coincide with the exhibition. Lost Summer will be published as an edition of 500 in November 2020, with pre-orders available from October.

About Alys Tomlinson
Alys Tomlinson was born in 1975 and grew up in Brighton, UK. After a degree in English, she went on to study photography at Central Saint Martins and recently completed an MA (Distinction) in Anthropology at SOAS, University of London, which ties in with her long-term, personal project about pilgrimage. Her major body of work ‘Ex-Voto’ (2016-2018) explores Christian pilgrimage sites in Lourdes (France), Ballyvourney (Ireland) and Grabarka (Poland). The works encompass formal portraiture, large format landscape and small, detailed still-life shots of the ex-voto objects and markers left behind. She is
currently working on Vera, a feature length documentary film, which focuses on one of the pilgrims whom she met in Grabarka, exploring her life at a convent in Belarus. Alys lives and works in London.
Selected recent awards include: nominated for Prix Elysee 2020, Rencontres d’Arles New Discovery Award 2019 Shortlist & Public Prize Winner; Photographer of the Year Award at the 2018 Sony World Photography Awards; 1st Prize (Discovery Category) at the 2018 Sony World Photography Awards; Taylor Wessing Portrait Prize Shortlist (National Portrait Gallery); Royal Photographic Society International Photography Exhibition 161 Silver Prize; ‘Ex-Voto’ was published as a book by GOST in Spring 2019.
Selected solo exhibitions include: The Faithful, Louis Roederer New Discovery Award exhibition, Les Rencontres d’Arles, Arles, France; Chichester Cathedral, Chichester, UK; Ex-Voto, Side Gallery, Newcastle, UK.

About HackelBury Fine Art
HackelBury Fine Art deals in 20th and 21st century artworks from a carefully selected stable of artists. The gallery was opened in 1998 on Launceston Place and is steadfast in nurturing a long-term relationship with both its’ artists and clients. Whether working with young emerging artists or established names, the gallery concentrates on providing support and opportunities for its’ artists to continue to evolve and develop. They focus on lluminating the ideas and philosophy of each artist and the experience of the work itself. This is done through an expanding programme of gallery exhibitions, museum projects and publishing ventures.