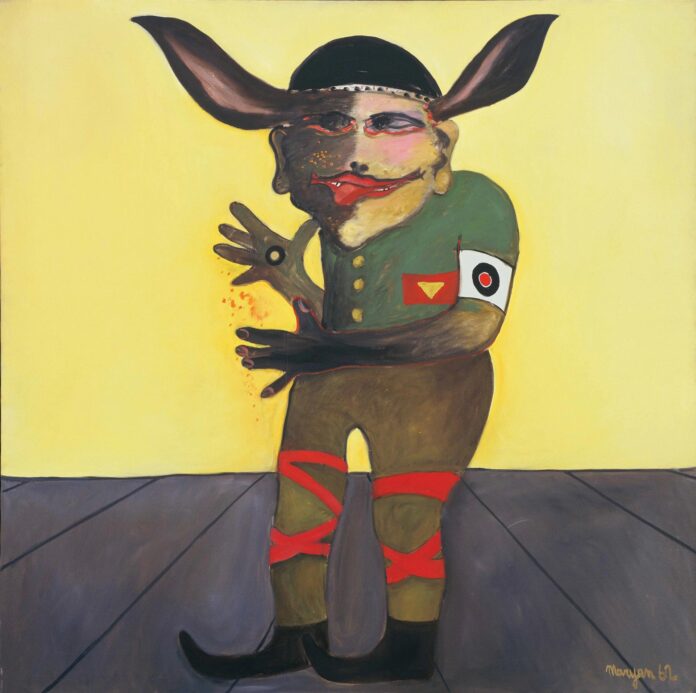 My Name is Maryan
Until 20 March 2022 at the Museum of Contemporary Art North Miami
The Polish-born Jewish artist Maryan was a child when he arrived at the Auschwitz concentration camp and left Auschwitz in 1945 as the only survivor of his bloodline. His life from there was a highly prolific and progressive artist’s life, one that encompassed the very beginnings of Israel, the avant-garde art schools of Paris and the bohemian subcultures of New York, but his work gone largely unrecorded and unremarked in the canons of art history. Maryan’s name remains obscure even to many art students. But now, thanks to extensive new scholarship and deep research, as well as the discovery of a huge trove of never-before-seen works, Maryan’s name may become established as one of the most significant and resonant figures in post-war art history. Maryan is now regarded as amongst the few major artists to have directly witnessed the most extreme and traumatic manifestations of the Holocaust. Yet he did not want to be defined as a Holocaust artist; he strived to make his life and work amount to more than the unthinkable and total horror he was subjected to as a child.

Witness: Afro Perspectives from the Jorge M. Pérez Collection
Until 1 February 2022 at El Espacio 23
Witness is the second exhibition at El Espacio 23, a contemporary art space founded in 2019 in Miami’s trendy Allapattah neighbourhood by the local real estate tycoon and collector Jorge Pérez. Featuring 100 works by artists from Africa and the African diaspora, the display follows the centre’s aim of presenting “a new facet of the South Florida community and explore how seemingly far-off cultures influence our own day-to-day life”, according to the Pérez Collection curator Patricia M. Hannah. Addressing themes such as identity and oppression, the show calls on visitors to bear witness to the challenges carried from one generation to another. Curated by Tandazani Dhlakama of Cape Town’s Zeitz MoCAA in collaboration with Hannah and her colleague Anelys Alvarez, the exhibition is drawn from works from Perez’s collection and includes pieces by 75 established and emerging artists such as Johannesburg’s Mikhael Subotzky and the late apartheid-era artist and writer David Koloane, whose work explored issues related to human rights and political injustice.

Betye Saar: Serious Moonlight
Until 17 April 2022 at the Institute of Contemporary Art, Miami
The celebrated artist Betye Saar—who is best-known for her sculptural assemblages centred on themes of spirituality, cosmology and the African diaspora—made a series of installations in the 1980s and 1990s that dimensionally and philosophically expanded on the “altars” she began creating in the 1970s. This understudied period of her career was inspired by her research into animist religious practices during trips to Nigeria, Haiti and Mexico. The complex, room-sized works immerse the viewers in Saar’s esoteric world, and are “beautiful, strong and provide new perspectives on Saar’s practice, but have received little institutional attention”, says Stephanie Seidel, the associate curator of the museum. The Los Angeles-based nonagenarian artist has written extensively about her influences, which are visible throughout the show. Among the highlights, The Trickster (1994) contains a quotation from the American author and voodoo researcher Zora Neale Hurston, who wrote: “Voodoo is a blade that cuts both ways.”

Frida Kahlo, Diego Rivera and Mexican Modernism from the Jacques and Natasha Gelman Collection
Until 6 February 2022 at the Norton Museum of Art, West Palm Beach
The exhibition features more than 150 Mexican Modernist works of art, including significant pieces by Frida Kahlo and Diego Rivera, assembled by Jacques Gelman and Natasha Gelman—Eastern European immigrants who relocated to Mexico in the 1940s, where they became avid collectors of Mexican art. To situate Kahlo and Rivera’s work within the larger narrative of Mexican Modernism, emblematic pieces from other Mexican artists such as Bride from Papantla (Portrait of Rosalba Portes Gil) (1944) by María Izquierdo are also on display. “The scope of [the exhibition] returns major works of Mexican Modernism to the context in which they were produced—in a collaborative artistic community seeking to make an authentically Mexican Modern art by exploring and embracing shared roots and folkloric traditions,” says Ellen E. Roberts, the Norton’s American art curator.

Bob Dylan: Retrospectrum
Until 17 April 2022 at the Frost Art Museum at Florida International University (FIU)
Bob Dylan, the ten-time Grammy winning singer, songwriter, Nobel Prize-winning poet and visual artist, looked to cinema for inspiration for his latest series of paintings, called Deep Focus. “All these images come from films,” he says. “They try to highlight the different predicaments that people find themselves in. Whether it’s James Cagney or Margaret Rutherford, the dreams and schemes are the same—life as it’s coming at you in all its forms and shapes.” Around 40 new paintings are making their debut in this exhibition, marking the most comprehensive display of Dylan’s art ever to be staged in the US. Accompanying these new works are around 160 paintings, drawings and sculptures that span six decades. “Seeing many of my works years after I completed them is a fascinating experience,” Dylan says of the exhibition. “I don’t really associate them with any particular time or place or state of mind but view them as part of a long arc; a continuing of the way we go forth in the world and the way our perceptions are shaped and altered by life.”

George Clinton: Funkbasel
Until 31 January at Soho Beach House, with an artist talk on 4 December
Throughout his career, George Clinton of Parliament-Funkadelic worked hard to get people to loosen up, feel the flow and embrace the funk. His mission hasn’t changed, only his medium. The music he made with the group changed minds, opened eyes and made people sweat in the best possible way. But the music has always been inseparable from the aesthetic. Few can claim to have influenced so much art, both aural and visual. And with the possible exception jazz musician Sun-Ra, no one did more than Clinton and Parliament-Funkadelic to proliferate Afrofuturism as a concept, an aesthetic and a way of life. Clinton’s approach to painting is not dissimilar from his approach to music. Flow is important, as is knowing your limits. “Once I realised I could use the same theory that I use for making music, that I could go against the grain, it all made sense,” he says. “I’m colour-blind, so I had to learn to read the tones and values. How to gradually change colours and blend things together. It’s all in that feeling I get from doing what I do, in my way. When I get a rhythm like that, I can actually trust my feelings on whatever that new logic is. Because right now everything is up for grabs. All reality is up for grabs.”

Jorge Pardo: Mongrel
Until 1 May 2022 at the Museum of Art and Design at Miami Dade College
The Cuban-American artist Jorge Pardo is constantly engaged in dialogue—within his work, with his surroundings, his past and his influences, which range from his family’s escape to the US after the Castro regime wrestled control of Cuba, to the Abstract Expressionist painters that first grabbed his attention when he began to study art. But he is far from stuck in the past. His work, which inhabits a space between art, design and architecture, is very much of the present. His techniques are modern to the point that they rely almost completely on technology, but the work itself does not seem futuristic. His current show comprises 25 new drawings, modernist chairs and exquisitely complex chandeliers that pushes visitors to think about how shapes and hues that are steeped in a hidden narrative affect each other.

Alex Israel x Snapchat
Until May 1 2022 at the Bass Museum of Art
The artist Alex Israel, who is known for his embrace and infiltration of pop culture, has teamed up with the social media giant Snapchat to give his works an augmented reality boost. Five of Israel’s Alfred Hitchock-inspired self-portrait silhouette paintings—a long-running series for the artist—are on display at the Bass, and when viewed through the Snapchat app, each creates a dynamic, augmented reality (AR) experience that Israel designed in collaboration with the AR team at Snap Inc. The kitschy, maximalist effects vary from painting to painting: one self-portrait prompts a psychedelic drive through Los Angeles, others have a palm tree or a pelican protruding from them, while another depicts the artist as if he were trapped in his own self-portrait. And while such iconography is distinctly LA, where the artist and social media company are based, it translates seamlessly to the Miami landscape.