Home Exhibitions The Hôtel de la Marine, has opened as a museum, after an... 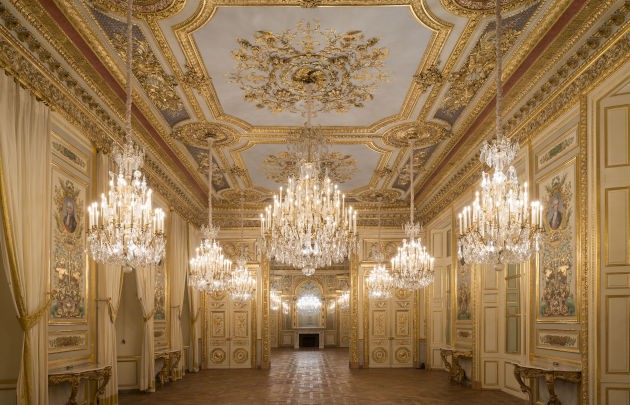 After more than four years of € 132 million (the US $ 158 million) restoration work, a new monument was unveiled in central Paris this month, adding another wonder to its already rich cultural landscape.

The Hôtel de la Marine, located on Place de la Concorde, is an immersion in Versailles-style luxury overlooking the square where Louis XVI and Marie Antoinette lost their heads.

Did we tell about the most beautiful balcony in Paris or fainting-worthy views? The luxurious ballroom where Napoleon hosted the party? You cannot miss this monument on your next Parisian adventure.

The Hôtel de la Marine dates back to 1755, when Ange-Jacques Gabriel, the chief architect of Louis XV, drew up a plan for the immense royal square, now known as the Place de la Concorde. The city’s largest square, surrounded on one side by monumental palaces and open to the Seine on the other, will be a tribute to the king after the end of the War of Austrian Succession, with his equestrian statue dominating it all.

The Garde-Meuble de la Couronne is a repository of royal furniture, crown jewels, tapestries, and precious art objects – was located behind one of the imposing façades in the square. It was opened to the public in 1772. And the building that is now the Hôtel de la Marine became a museum even before the Louvre.

From this perspective, the Hôtel de la Marine has witnessed turning points in the history of Paris, including the mass executions by guillotines during the reign of terror (1793–1794), the Pharaoh’s task of erecting the 3,000-year-old Luxor obelisk in the monastery, the middle of the square after it was taken out of Egypt (1833) and the liberation of Paris from the Nazi occupation (1944).

Corinne Menego, Managing Director of the Paris Bureau of Congresses and Visitors, says the Place de la Concorde location is a very symbolic place, which is why the Hôtel de la Marine is extremely important for the city.

The building that has been closed to visitors since the 18th century is returned to the public again. And it was done in a grandiose way.

More than 1000 people from 50 different professions took part in the renovation project, including gilders, upholsterers, blacksmiths, and carpenters.

The most remarkable room

Dore’s study, which was covered with stainless steel walls during its incarnation as a kitchen in the 20th century. During the renovation, these steel panels were removed, and restorers discovered miraculously preserved decorative boiserie from the 18th century.

Meticulous detective work allowed CMN to track down the set of furniture that adorned the room when it was the intendant’s private office: the secretary and the exquisite Table of the Muses, both created by Jean-Henri Rieseneur, Marie Antoinette’s favorite ébéniste.

Burali says that they were looking for identical restitution of these rooms so that when visitors entered, they had the feeling that the residents had left them just a moment ago. To this end, experienced restorers combed through the archives and inventory of the period to find original fabrics and furniture, some of which were borrowed from such prestigious institutions as the Louvre, Mobilier National Agency, the Palace of Versailles, and the Sevres Manufacture.

In Hôtel de la Marine, there is a gaming table strewn with authentic games, 18th-century damask, and fabrics purchased from flea markets and antique dealers, as well as a table at which the abolition of slavery decree was signed.

In the dining room, where the table is decorated as if it looked after a decadent meal, the silk hangings on the walls were hand-painted from archival records. The visitor chain is improved with a headset that is a theatrical time journey.

The visitor number is improved with a headset that is a theatrical time journey. After the renovation, real scenes with characters were created to give the visitor an emotional component, and not just convey the historical information that you can find in books.

After browsing through the collections, you can stroll through the Hôtel de la Marine boutique, designed like a cool concept store, or grab a bite to eat at Café Lapérouse, which serves meals in the courtyard throughout the day.

The Palace Forbade Prince Harry From Defending Himself After an Eton Art Teacher Accused Him of Cheating, Memoir Reveals