Home News A Network of German Museums Have Become Embroiled in the Alleged Antiquities... 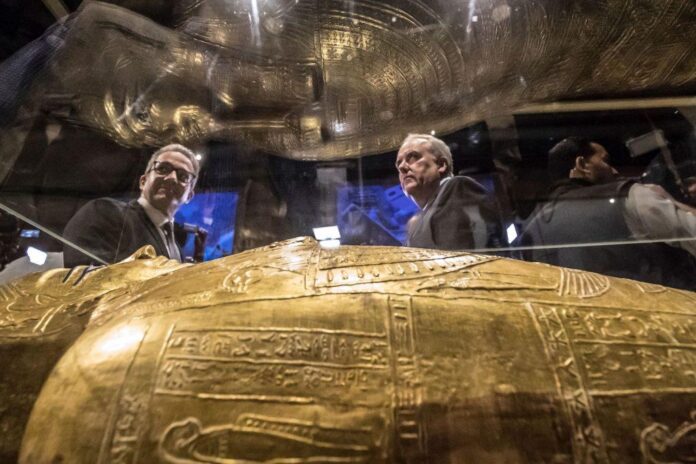 New puzzle pieces continue to surface in the global investigation of smuggled antiquities that has embroiled some of the art world’s most powerful institutions and leaders, including the Louvre’s former director, the Metropolitan Museum of Art, and the Louvre Abu Dhabi.

It now appears that several German museums played key roles in whitewashing antiquities of proven or alleged illicit origin that belonged to the Simonian family of dealers, who run the Dionysos gallery of Ancient Coins and Antiquities in Hamburg. It remains unclear to what extent those institutions acted knowingly, according to the Art Newspaper, which broke the story this week.

The Simonian family, originating from Cairo and of Armenian background, is the source of millions of dollars’ worth of Egyptian and Near Eastern artworks sold to the Met and the Louvre Abu Dhabi via their collaborator and alleged front man, the dealer Robin Dib. Dib is being held in France for criminal conspiracy, gang fraud, and money laundering in connection to the scandal. He denies wrongdoing.

Several works stemming from the Simonian family and sold to the Met were returned to Egypt in recent years, including the famous golden sarcophagus of priest Nedjemankh, which tipped American and French investigators off as to the existence of the family’s network.

Speaking to the Art Newspaper, German museum curators recount how the now 80-year-old Serop Simonian allegedly arranged several murky deals with three German museums (he tried, but couldn’t convince a fourth) to store his antiquities of often unclear provenance in their warehouses over varying periods, spanning decades. As part of the deal, Simonian allowed institutions to show his art objects in traveling exhibitions. In exchange, at least one museum in Hildesheim was given the opportunity, or rather beholden, to purchase pieces from Simonian’s holdings, for what have been since shown to be inflated prices.

Simonian’s strategy lent impressive legitimacy to the objects in question, paving the way for sales at auction and directly to institutions, while also increasing their value.

The museums concerned are the Roemer & Pelizaeus Museum in Hildesheim; the Egyptian Museum at the University of Bonn; the University Institute in Trier; and for a “couple of months” from 2012 to 2013, the Reiss Engelhorn Museum in Mannheim, a museum spokesperson confirmed to Artnet News. 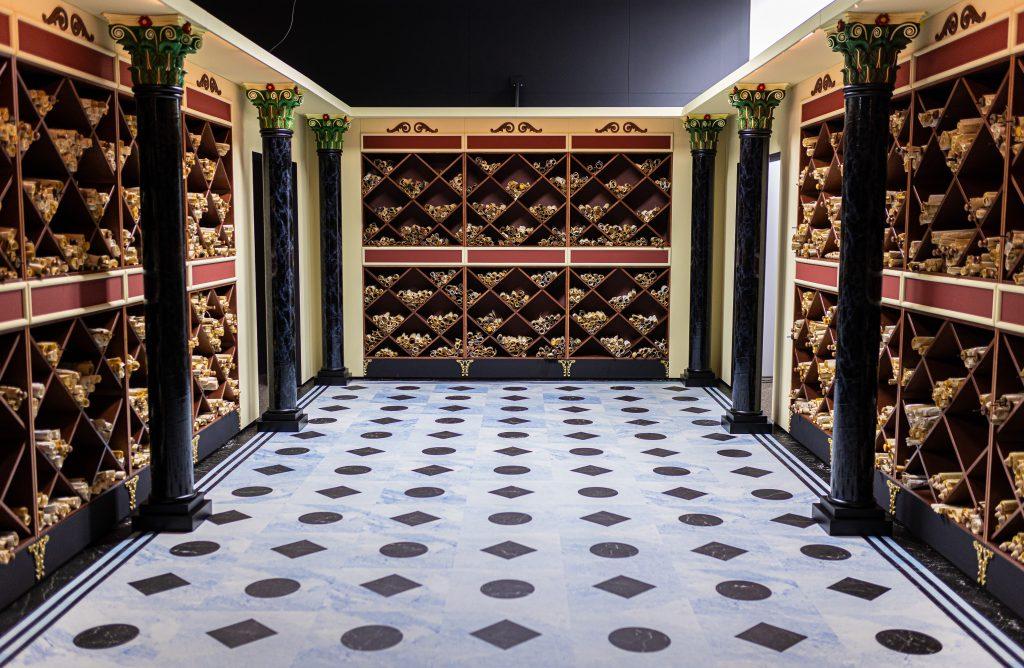 A reconstruction of the Library of Alexandria in the Roemer- und Pelizaeus-Museum Hildesheim. Photo by Moritz Frankenberg/picture alliance via Getty Images

“Serop Simonian offered a long-term display agreement [to the Mannheim museum], but it was declined because he failed to provide reliable provenances and there were even doubts as to the authenticity of some of them,” the spokesman explained. The German institutions have been cooperating with police and are not, to date, being investigated for wrongdoing, according to the Hamburg public prosecutor’s office.

In June, Le Monde also reported that, in addition to German institutions, museums in Italy were similarly used by Serop Simonian as safe havens for antiquities of allegedly dubious provenance. They based their information on the French investigative report.

Serop Simonian “was storing much of his stock in the [Roemer & Pelizaeus Museum’s] warehouse,” Eleni Vassilika, head of Roemer & Pelizaeus Museum in Hildesheim from 2000 to 2005, told Artnet News. She noted a “lack of awareness in Germany, in particular, of the UNESCO accords” to prohibit illicit imports. “Hildesheim bought aggressively, perhaps to make up for losses due to WWII,” she said.

When she began at the museum, Vassilika discovered Simonian’s unorthodox use of the museum in 2001, enabled per an arrangement with its former director, the now-deceased Arne Eggebrecht. Vassilika also told police and officials that only Eggebrecht and Simonian had access to the antiquities stored—or hidden in plain sight—in the museum, which they moved and labelled on weekends and nights. She said she received pushback for doing so. “What is even more shocking is the number of academic colleagues whom I regard as the ‘enablers’ of these activities. Some are still active,” she added.

The Roemer and Pelizaeus Museum (RPM) also confirmed to Artnet News in a written message that “objects were bought and/or loaned by the Roemer and Pelizaeus Museum from the Hamburg art dealer in question in the 1980s/90s. Objects not acquired by the museum were also displayed alongside museum objects at three traveling exhibitions in the United States, Spain, and Taiwan. In all cases, the provenance of the objects was checked according to the standards that were common at the time. In 2001, all objects still owned by the art dealer [in the museum storage] were returned in the presence of city and museum representatives. There has been no contact with the art dealer and his family since 2001.”

Neither the museum nor its former employees are the subject of police investigations, added an RPM spokesperson.

The German media outlet Deutschlandfunk also corroborated that none of the antiquities exhibited in the Roemer and Pelizaeus Museum’s traveling exhibitions were labeled as belonging to Simonian.

In 2020, French investigating judge Jean-Michel Gentil issued European arrest warrants for Serop Simonian and his two children for criminal conspiracy, gang fraud, and money laundering. However, a representative of the Hamburg public prosecutor’s office explained in a message to Artnet News that their investigation into the case is “still ongoing,” and that the extradition of the two children was “declined first and foremost because of family reasons,” largely due to the presence of younger children.

Referring to Serop Simonian, the representative continued: “Concerning the fourth suspect (the father), the extradition procedure is still pending,” and he has not been charged with any crime to date. However, the Simonian children, who remain unnamed in German media, and could not be accurately confirmed in time for publication, “are being prosecuted in Germany for the same facts.” The prosecutor’s office could not disclose what specific charges the children were facing, because “the investigations are ongoing.”

Le Monde reported that one of Serop Simonian’s sons, Abraham, made €3.7 million ($3.7 million) on the sale of Princess Henouttaouy sarcophagi, which the Louvre Abu Dhabi purchased in 2014 for €4.5 million ($4.5 million). French investigators have shown it has the same provenance as the Nedjemankh coffin sold to the Met, according to the French daily Liberation, which viewed reports of the investigation. 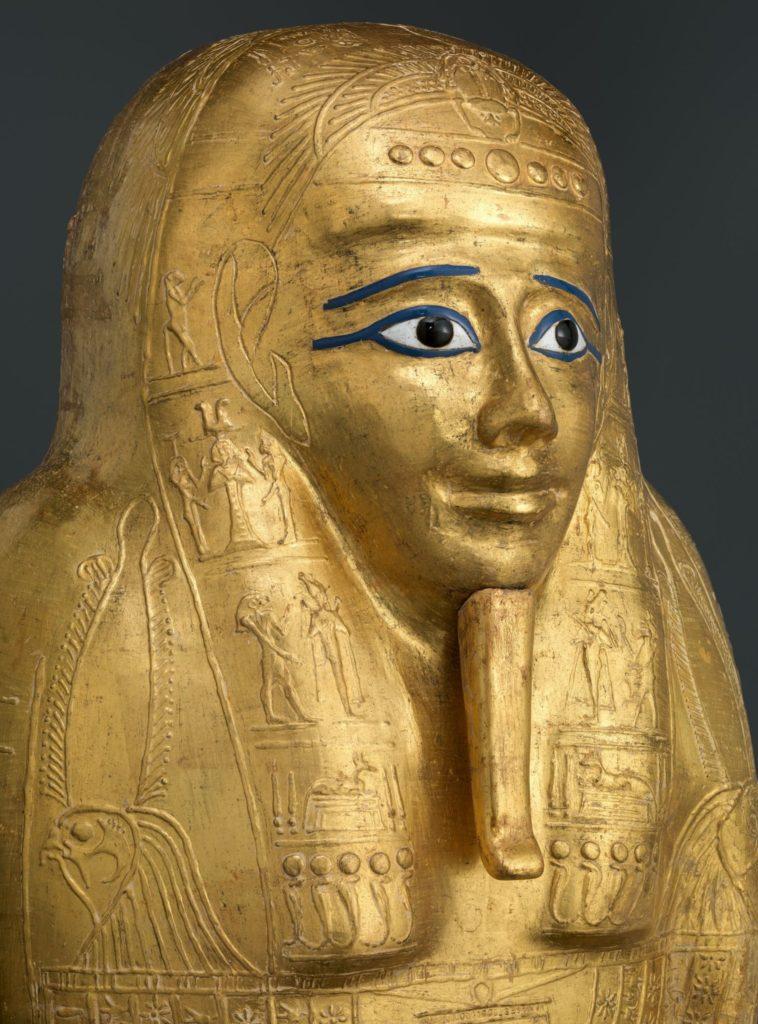 The gilded coffin of Nedjemankh. Photo courtesy the Metropolitan Museum of Art.

German police conducted a search of the Simonian family home and gallery in 2020. Adding to their earlier statement, the Hamburg public prosecutor’s office said Serop Simonian and his two children “have been granted legal hearing as part of the house search,” which can involve a police interrogation. However, the three “decided not to comment on the allegations and not to appear for the police interrogation. Under German criminal law, a suspect cannot be forced to do so and has the right to remain silent. Later on, one of the suspects has denied the allegations through his defence attorney,” stated the prosecutor’s office.

Serop Simonian and his gallery would not return Artnet News’s inquiries, but his lawyers told German media Deutschlandfunk and Zeit that no questions would be answered at this time. They stated: “We would like to point out that some of these [reports] contain inaccurate statements of fact, which are therefore not allowed to be published. In particular, the investigative authorities in Germany have not accused our client of anything, particularly no ‘antique smuggling’. Rather, the public prosecutor’s office only sees indications of this and is therefore investigating–as you probably know—with an open mind.”

Serop Simonian and Robin Dib have both claimed they had legal export documents for their holdings, and that many of the objects came from Serop’s late brothers, Simon and Hagop.

Meanwhile, the judge leading the French investigation, Jean-Michel Gentil, has been promoted this month to second in command of the French Office of the Inspector General of the National Gendarmerie (IGGN). It remains to be seen who will replace him in the country’s art trafficking investigation, conducted in collaboration with Manhattan’s Deputy District Attorney Colonel Matthew Bogdanos, who first cracked the case.