Home News Activists in Italy Glued Themselves to an Umberto Boccioni Sculpture in Milan... 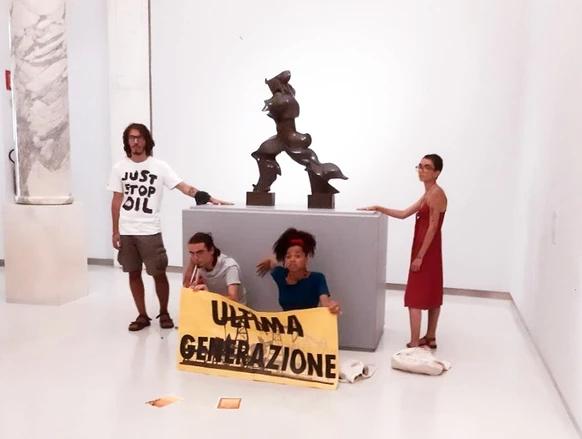 Taking cues from recent high-profile demonstrations in the U.K., a group of Italian climate activists glued themselves to a sculpture by the Futurist artist Umberto Boccioni on Saturday.

Four protesters from the group Ultima Generazione (Last Generation) strode into the Museo del Novecento in Milan. They adhered themselves to a plinth supporting Boccioni’s 1913 bronze Unique Forms of Continuity in Space, which depicts an abstract figure mid-stride, and unfurled a banner with the group’s name.

“We have to change direction,” Ultima Generazione said in a statement after the incident. “We are glued to Boccioni’s work because we can no longer afford to rush towards economic progress. The progress that the Futurists hoped for is the same that is now leading us towards mass extinction.”

Local law enforcement detained the protesters, who now face charges of “damage and resisting a public official,” the reported. The museum closed following the episode.

Representatives from the institution did not immediately respond to a request for more information on the protest, including whether or not the Boccioni artwork was damaged. In its statement, Ultima Generazione explained that its members targeted the sculpture’s pedestal to protect the actual figure, and even “consulted restorers who advised them to use a suitable adhesive.”

Last Saturday’s event comes just days after other members of Ultima Generazione staged a similar demonstration at the Gallerie degli Uffizi in Florence, gluing themselves to the glass protecting Sandro Botticelli’s Primavera (circa 1480). Both attacks are part of a broader effort designed to draw attention to the climate crisis; in art, the group has found a medium for its message.

“In the same way that we defend our artistic heritage,” the activists told Artnet News, “we should be dedicated to the care and protection of the planet that we share with the rest of the world. Art has always had an important value in transmitting beauty, in uniting cultures, and in preserving the best expressions of humanity. Now it should still be like that.”

Ultima Generazione’s demonstrations appear to be inspired by a similar campaign launched earlier this summer by the U.K.-based activist organization Just Stop Oil. Since June, the latter group’s members have glued themselves to paintings by Horatio McCulloch, Vincent van Gogh, and J.M.W. Turner in Glasgow, London, and Manchester, respectively.

It’s unclear if the two groups are affiliated, but members of Ultima Generazione were wearing Just Stop Oil shirts at their recent protests in Italy.

‘A fig for your barriers of wire’: Diego Rivera’s dream of a united America explored in major show