Home News Archaeologists From the UAE and U.S. Have Uncovered One of the Earliest... 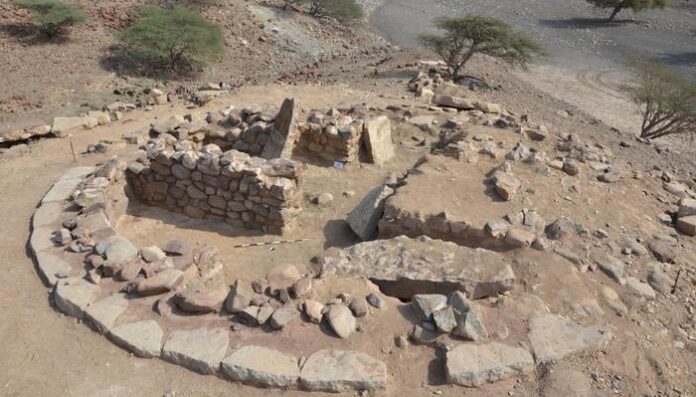 After nearly a decade of digging at Dahwa, a complex of five early Bronze Age sites on the Arabian Peninsula’s west coast all related to the era’s Umm al-Nar culture, Oman’s Ministry of Heritage and Tourism has released details on what’s been unearthed. The archaeological discoveries include building floorplans, industrial infrastructure, and silver jewelry that hold new tales of ancient trade.

Led by Nasser Al-Jahouri and Khaled Douglas, both from the Department of Archeology at nearby Sultan Qaboos University, in collaboration with Temple University’s Kimberly Williams from the U.S., the archaeological team has uncovered new relics that all date back to the Umm al-Nar heyday, around 2600 to 2000 B.C.E.

“These sites represent the oldest permanent settlements in the north of the Sultanate of Oman,” Al-Jahouri said in a statement. Another significant Umm al-Nar settlement and cemetery, 300 kilometers west in Abu Dhabi, became a UNESCO site in 2012.

Al-Jahouri originally discovered Dahwa in 2013. He considers it “among the important early Bronze Age sites in the Al-Batinah Plain due to the nature and quantity of archaeological finds.” An exhaustive, seven season survey followed. Archaeologists determined the settlement’s precise timeline, along with its economic and social functions, by mapping buildings and their surrounding conditions.

Most recently, researchers excavated Dahwa’s stone buildings, which included warehouses, industrial copper processing centers, administrative offices, and religious houses. The structures are all “the first of their kind from prehistoric times found in Oman,” according to Al-Jahouri.

“Among the most important and distinguished tools from this tomb are the remains of silver jewelry, such as beads that are part of a necklace and a number of rings,” Wilson said in a statement.

Similar seals on soapstone have been already discovered around Salut and Maysir in Oman, but Dahwa’s example marks the first time that the insignia has been seen on a metal ring. Researchers determined the silver behind this one likely hailed from modern day Turkey, inserting Oman into ancient exchanges between civilizations in Iran, Bahrain, Mesopotamia.

“This discovery proves that the peoples of the Bronze Age were more intelligent and technologically advanced than previously thought,” Jonathan Mark Kinnware, an expert from the University of Wisconsin-Madison, noted in an announcement about the discovery. “At an early stage they introduced management solutions that allowed them to grow economically in the following millennia.”