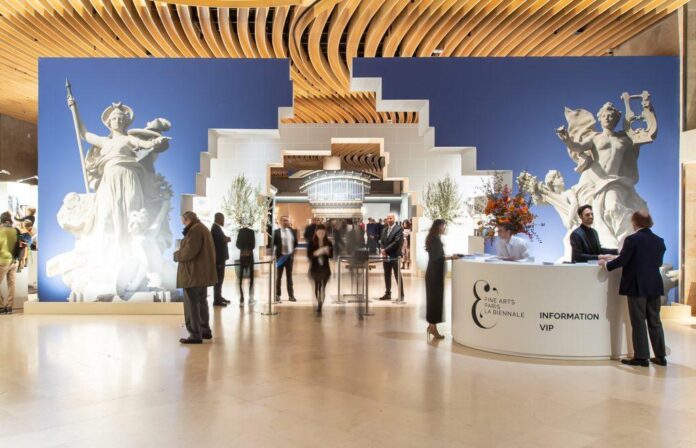 “Last year, the two fairs took place just a few weeks apart, and so we thought it would be interesting and judicious to do one fair reuniting them,” Louis de Bayser, Fine Arts Paris & La Biennale’s president, told Artnet News. “Each fair had around 56 exhibitors last year; we’ve brought together 86 for this event.”

Bayser, who presided over Fine Arts Paris (founded in 2017), discussed the possibility of joining forces with the Syndicat National des Antiquaires (SNA)—France’s national syndicate of antique dealers, which founded La Biennale in 1956.

“Our vision is to establish a generalist fair, bringing together fine and decorative arts, African and Asian arts, books and manuscripts, and develop it through the dealers’ specialisms,” Bayser explained. 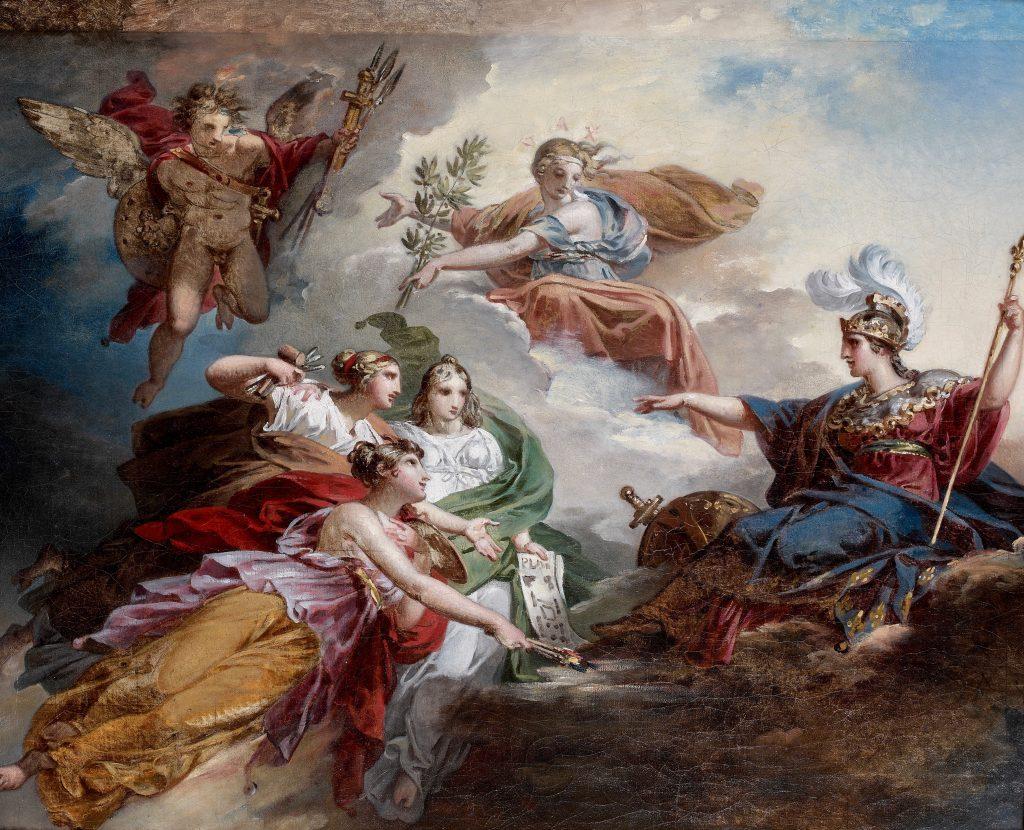 “Collectors who might come to see drawings may look at a tapestry, sculpture, painting or object that they didn’t envisage seeing. Stimulating surprise is the first step towards enlarging someone’s collection,” added Bayser, whose paintings’ stand includes Charles Meynier’s La France, sous les traits de Minerve, protégeant les Arts (1818–19), a preparatory drawing, priced at €60,000 ($60,700), for a painted ceiling in the Louvre.

Next year, the fair will be held in the Grand Palais Éphémère later in November, as Paris Photo has already booked the venue for the second week of November. Fine Arts Paris & La Biennale will relocate to the Grand Palais when the space reopens in 2024 after major renovations. “The idea is to grow step by step,” Bayser noted.

For Anisabelle Berès-Montanari, the SNA’s president, merging the two fairs was a necessity. “It was ridiculous having two fairs at practically the same time; Paris deserved one big fair,” she said, adding: “Collectors received too many invitations and didn’t know which fair to select; we needed to adapt to people’s demands.” 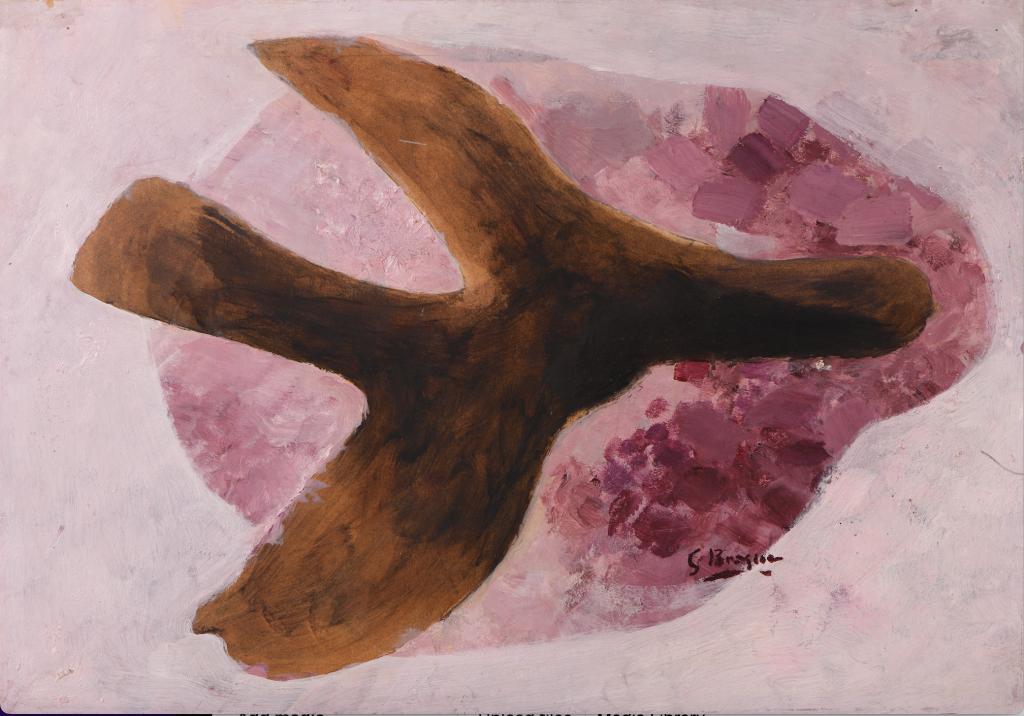 Berès-Montanari added that the SNA “didn’t sell anything” in terms of La Biennale’s brand name: “The new fair is just an agreement between two important entities.”

Once an unmissable, resplendent event in the Parisian art calendar, La Biennale had lost its luster during its last few editions. Mathias Ary Jan, the SNA’s vice-president and former president of the SNA and La Biennale, is pleased that it has teamed up with Fine Arts Paris. “I dreamt about this for years,” Ary Jan exclaimed.

Referring to how the fair landscape has irrevocably changed over the past few decades, making the SNA ill-equipped to manage La Biennale, he said: “We were giving our time benevolently to organize fairs but we’re not event organizers, and today a fair needs to be organized by [fair] professionals, not dealers.”

“La Biennale was losing momentum but in its heyday, in around 2012 and 2014, it was the most beautiful fair in the world—art and excellence à la française,” said the Brussels-based African arts dealer Didier Claes. “It was internal warring that ended La Biennale and it was a mistake to let the high jewelers go because they brought their clientele, glamor and means [to present scenographic stands].”

“This is the start of the renaissance,” added Claes, who sold works from Ivory Coast and the Democratic Republic of Congo. His stand’s highlight is a human-sized wooden Urhobo sculpture from Nigeria of a high-ranking, bejeweled and seated man, priced at €750,000 ($758,800).

Indeed, Anthony Meyer, a Parisian dealer of Oceanic art, is adamant that the fair “is opening up a new era.” He said: “We need to get our act together and our show on the road. It’s my belief that we are past that period of complications and various issues.”

For Giovanni Sarti, the director of Galerie G. Sarti which specializes in Italian Renaissance works, the French fairs should have merged years ago. “When Paris Tableau [a precursor to Fine Arts Paris, with some of the same founding galleries], was taking place, I had the idea that it could have been presented within La Biennale in the Grand Palais,” he said. “But the two identities didn’t mellow together.” Asked if Sarti voiced his thoughts to the fair’s organizers, he replied: “I am a voice in the desert.”

Exhibitors are enthusiastic about the new fair. “It’s an excellent idea because it means that La Biennale, a longstanding fair, gets input from a younger fair,” said Daisy Prevost-Marcilhacy, the director of Geneva’s De Jonckheere Gallery, which is presenting Jan Brueghel the Younger’s pair of 17th-century paintings, Allegory of Taste and Allegory of Hearing, priced at €950,000 ($961,150). Pointing to how the fair needs to grow, Prevost-Marcilhacy remarked: “It’s like a movie—it needs great actors and good casting. We need to have the best of the best of each specialism.” 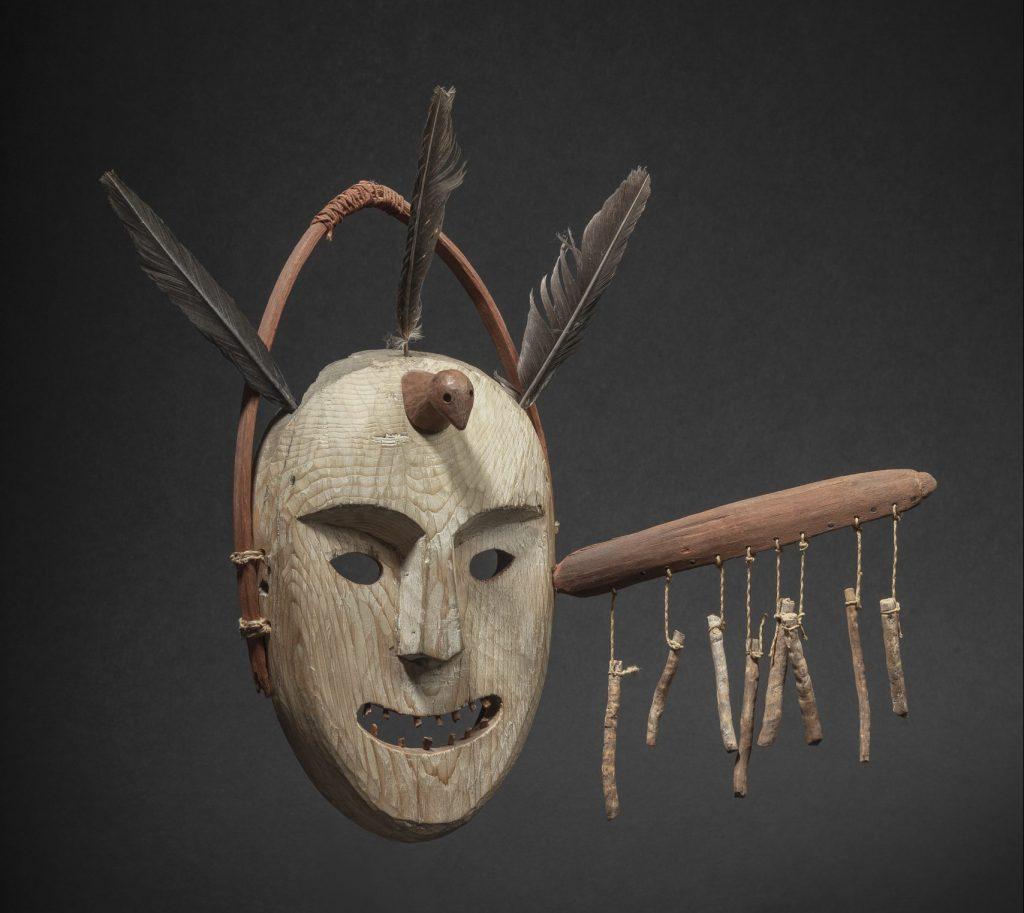 French dealer Hervé Aaron of Didier Aaron, who sold a 19th-century painting by Théodore Gudin of sailing boats on the Garonne river in Bordeaux, priced at €20,000 ($20,230), during the fair’s preview, said: “Now we need to work together to become even better and attract bigger, more international dealers who will bring their international clientele to Paris. Next year we’ll have 20 more stands.” He added: [TEFAF in] Maastricht wasn’t created in one year.”

Meanwhile, Tribal arts dealer Edith Flak’s was more concise about her first impressions of the fair. “It’s an interesting synergy,” said Flak, who sold seven African, Oceanic and North American works at the preview. On her stand is a 19th-century Yup’ik shamanic mask from northern Alaska with a bird on its forehead and feathers and dreamcatchers to draw protective spirits. The piece is priced at €120,000 ($121,410).

Florence de Voldère, who is presenting Flemish painter Abel Grimmer’s  large-scale, riveting landscape of people from different social classes ice-skating on a Dutch river, commended the overall quality of works available at the fair: “Everybody is bringing the best of their traditions.”

Many dealers expressed their desire for the new fair to grow in prestige. “The aim is to give Paris—which is a collector’s paradise—an historical art fair at the level that it deserves, not necessarily like TEFAF or BRAFA because our fair is above all Parisian,” said 19th-century art dealer Bertrand Gautier, who sold Victor de Grailly’s study of a tree (€8,800; $8,900) and a landscape by François Bonvin (€15,000; $15,180) during the preview.

Also on view at Talabardon & Gautier’s stand is August Kopisch’s glorious deep red sunset painting, priced at €385,000 ($389,520), which will be included in an exhibition at Germany’s Kunsthalle Bremen in 2023. 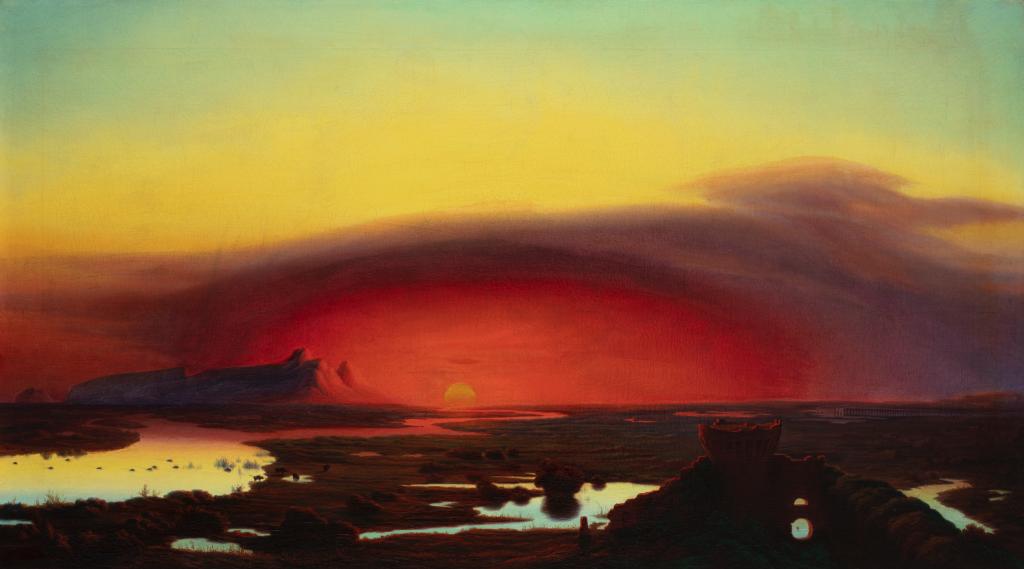 How the fair will expand, however, remains to be seen. La Biennale showcased a vast panoply of fields, including contemporary art, high jewelers, and design, but these fields have been whittled down at this new fair. Although Fine Arts Paris & La Biennale boasts several Modern art dealers, such as Galerie de la Beraudière with its atelier-inspired display of Germaine Richer’s sculptures, two contemporary art dealers and a couple of jewelers, there are no galleries specializing in design.

Although sales at the preview were moderate, with one dealer saying that he was “happy rather than very happy,” exhibitors remained buoyant. “Paris has an enormous card to play for this to be a major event on an international level,” said the contemporary art dealer Christophe Gaillard, who sold a wooden abstract sculpture by Richard Nonas, €48,000 ($48,560) and two paintings by Roma artist Ceija Stojka, priced at €10,000 to €15,000 ($10,120–$15,180).

Fellow contemporary art dealer Éric Dereumaux of RX would like to see “five or six contemporary art galleries” next year. “This week there’s lots of competition,” he said, noting that Luxembourg Art Week, Paris Photo and Art Dubai are all taking place this week and how galleries such as La Patinoire Royale—Valérie Bach, a former exhibitor at La Biennale, have opted to participate in the other fairs.

Next year, with a later November slot for Fine Arts Paris & La Biennale, this clash should be avoided.

‘This show was in some way my own wake’: Solange Knowles on her Venice Biennale performance, the focus of a new book