Home News Artist Titus Kaphar on His Debut Documentary, and How It Centers the... 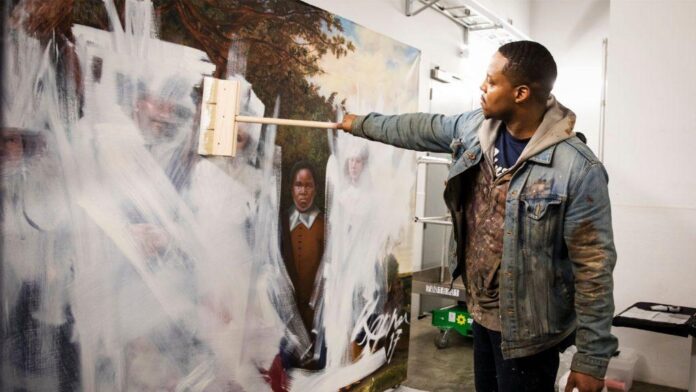 A lot of people would still be surprised to find out that not too long ago, artist Titus Kaphar and his brother were stopped by the police while walking around the gallery district in Chelsea. If not surprised, then at least disappointed. Like the incident continues to open their eyes to things happening that really shouldn’t happen—and that those things often happen to Black people.

As the two were on either 25th or 26th Street, in between stops that Kaphar had made countless times before, including one to his solo show at Jack Shainman gallery, an unmarked police car “skids up next to us,” he recounted, “and two officers jump out of their car with their hands on their guns.”

And Kaphar knew he shouldn’t have gotten angry, gesturing to the white passersby on the street and saying to the officers, “Well, what about all these white folks walking around.” He remembered shouting, “How come my freedom is different from their freedom?”

Because it’s not surprising to him that his freedom is different—that his safety is not a given. He’s always known that. Part of what he finds frustrating about the people who interact with his work nowadays—the audiences he points to in his 20-minute directorial debut, , a film that offers an intimate look into part of his life as a Black artist—is that it’ll invariably come across as a surprise to most of them. Or they’ll react the only way they can, like they’re on the outside looking in.

Two years after Kaphar won the 2018 MacArthur Genius award, he was profiled on . The segment was about his life and career, and how much his work resonates with the Black Lives Matter movement—especially after the 2020 murder of George Floyd.

After Kaphar reacted with what looked like ambivalence when the interviewer noted how collectors have responded in kind, clamoring to get their hands on his work, she said: “You almost seem disappointed by all of this.” The segment then cuts to a discussion of his childhood, with a voiceover explaining that Kaphar would rather “focus on the beginning of his story.” But that’s not why Kaphar was conflicted at the time. In , where he included this snippet of the CBS segment, he explains the real reason why.

“90 percent of what I sell doesn’t go into Black or brown homes,” Kaphar says to his dealer in a scene that follows a walkthrough of “In From a Tropical Space,” his 2020 sold-out show at Gagosian. For the solo, Kaphar exhibited paintings that depicted Black mothers whose children had been taken away, literally cut out of the canvases.

“The conversation that Black artists have been having is that our work exists in white spaces, in white people’s houses,” he explains in the same scene, “and they become separate from us, and disconnected from us, in a way that just feels not just.” 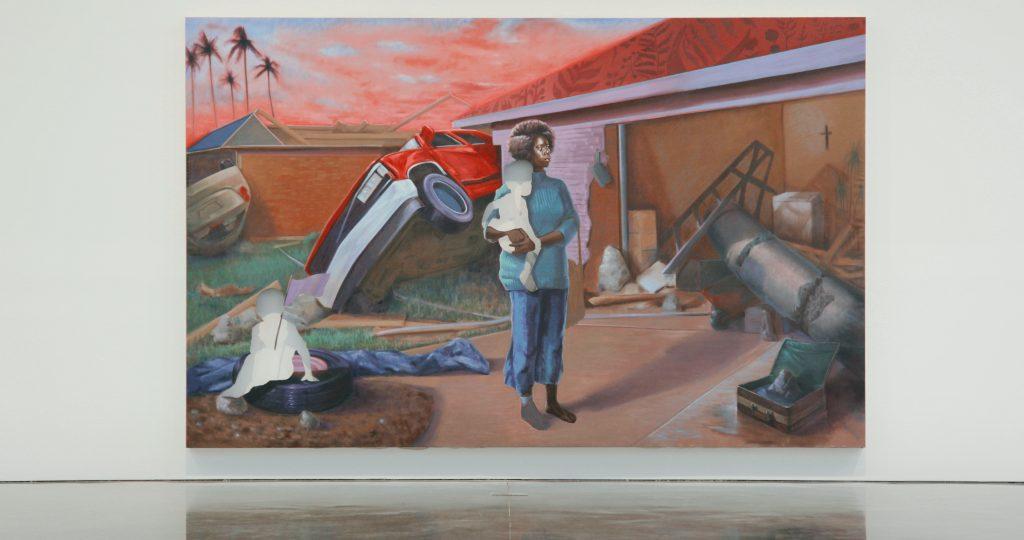 And those audiences don’t share in his burdens. They look at his activism at a remove, in a way where they can’t remotely fathom getting confronted by the police for allegedly stealing while simply walking in and out of galleries. There are other audiences, though—“like my folks, my family, the cousins and friends I grew up with in my neighborhood,” Kaphar said— who could relate; who, instead of labeling him an activist “in that way,” would just call him Titus, the guy telling their truth. But those audiences “don’t go to see that stuff [in mainstream museums and galleries],” he continued.

And Kaphar did everything right, everything the art world says you should. He went to Yale for art school, got a residency at the Studio Museum, and ticked off the boxes that don’t necessarily ensure art world success, but certainly put an artist in a better position to achieve a traditional notion of it. And during that process, his work moved further and further away from an audience that could understand it.

For his show at Jack Shainman, the one he’d introduced to his brother, Kaphar exhibited a series that explores the mass incarceration of Black people in this country. And when he’d started it, “I wasn’t thinking like, ‘oh my God, look at this big criminal justice system. It’s unmanageable,” Kaphar explained. “I was thinking about my cousin who died in prison last year. And my other cousin, who is in prison right now. And my mother, who has been in and out my whole life. So as an artist, I’m not out to make activist paintings. I’m trying to make sense of some stuff for myself, and put it on canvas.”

It just so happens that Kaphar’s “inward-looking moments” like these, he said, happen to “align with what’s happening in the world anyway.” And people will buy art, like Kaphar’s, in sympathy with it.

“Do you worry that with visible moves like these,” a reporter asks Kaphar in a clip included in the documentary, “that woke culture has gone too far? And that political correctness shouldn’t be dictating what we see and what we consume?”

Some can call what’s happening in the world woke culture. Or activism. And that makes it something they can like or not like.

But some can also just call it life.

Where Do We Go From Here?

“To a very large degree,” Yale philosophy professor Jason Stanley says to Kaphar in one scene, “your art is NFTs for billionaires.”

The conversation ends with Stanley then telling Kaphar that if this fact is at odds with where he wants his art to go—and with whom he wants it to interact—the artist is in crisis. Most Black artists are, to some degree or another. And they ostensibly will continue to be, as the structure of the art world—even for those artists, like Kaphar, who have been given major platforms for their ideas—doesn’t allow for equal access. Never has.

“There’s a trope in documentaries—especially documentaries that deal with social justice in any way—to tie it up with a bow at the end. And to say, ‘Here’s the issue. Here’s the struggle. Here’s the hero. And here’s the solution,” said Alex Mallis, co-director of . “And you walk away thinking, ‘Great, I guess it’s all taken care of then.’”

But that doesn’t mean Kaphar isn’t going to try to take care of some part of it. So far, his answer to the problem is twofold.

The first and last scenes of the documentary show one of the films that he is in the process of shooting—which the artist based on that 2020 show at Gagosian. The main character is a mother. Someone who reminds him of his own mother, who had Titus when she was 15—“raising a kid when you’re a kid,” as he explains to the actress in the film in another scene. 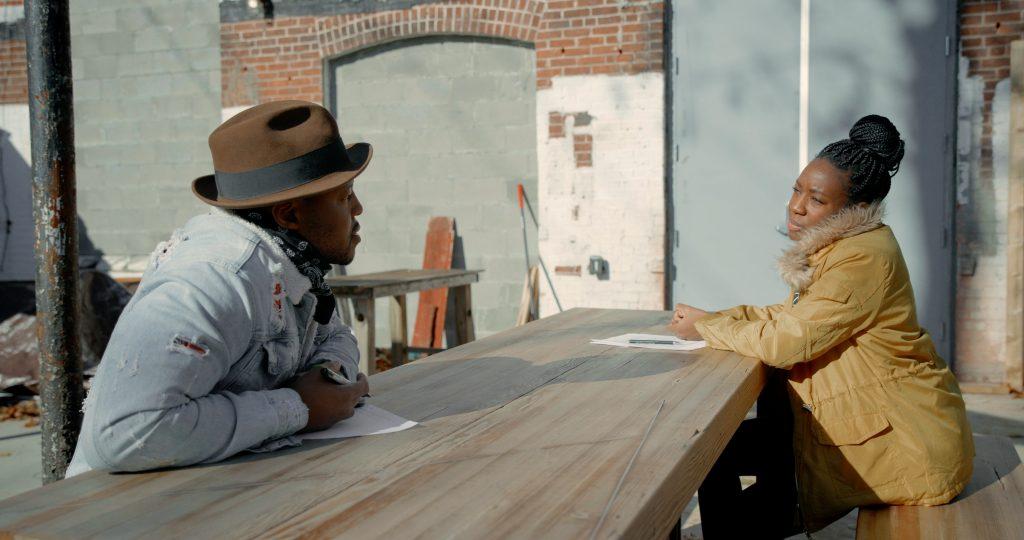 For Kaphar, “if you realize, in shouting your message, that it’s not reaching the community that you want to reach, you have to find a strategy for getting that message to them as well,” he said, “and that might mean changing my medium to be able to have a dialogue with folks.”

Kaphar’s forthcoming feature film, , is a narrative version of his struggle, detailed in , of balancing the “dichotomy between the art world and the community I was raised in,” he wrote in an email.

In real life, Kaphar finds some comfort in knowing that he’s founded something that is by and for people of color: NXTHVN. The Dixwell-based arts hub and community incubator is the theoretical conclusion to . Within an industry that is in many ways rigged against equity, Kaphar—as well as a number of Black artists, like Kehinde Wiley and McArthur Binion, to name a few—have created art programs targeting Black and brown artists that are located in and accessible to Black and brown communities. In doing so, Kaphar has found at least one way “to prioritize my community engaging with my work,” he said.

His job as an artist, though, has become tougher for it. As with many marginalized artists, “you might have to have two billboards, whereas other folks only have to have one and you might have to go back and forth, where other people get to stay in one place,” he said. “It’s just the nature of the game.”