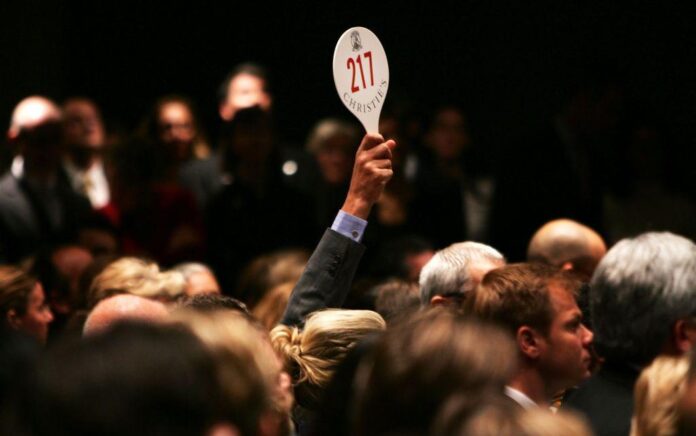 As the year draws to a close, we wish you happy holidays from the team over at Artnet News Pro, our members-only service designed to provide you with the tools you need to navigate the high-stakes terrain of the art market.

Since our launch in 2021, thousands of the art world’s most passionate denizens—from upstart strivers to titans of industry—have joined our community to get everything from an award-winning rundown of why art dealers tell lies to a data crunch on which galleries represent the world’s leading biennial artists. (We also throw in a healthy dose market trend analysis, and juicy industry scoops!)

Our goal is to offer detailed, analyst-caliber information that, without your support, would be impractical for a site like ours to produce at scale. Think of it this way: for just one article, a Pro reporter might meet with half a dozen sources, interview a dozen people, and work with our Business Intelligence Team to analyze more than a decade’s worth of auction-sales data.

If you haven’t yet taken the plunge, allow us to whet your appetite. Below, we’ve pulled together a selection of our team’s favorite Pro stories from 2022. If you like what you see but haven’t subscribed yet, there’s never been a better time: Sign up here.

We hope you’ll join us.

Information Is the Most Valuable Currency in the Art Business. So Is It Any Surprise That Art Galleries Bend the Truth?

There are famous cases of lies getting dealers into legal trouble. The Los Angeles gallerist Douglas Chrismas was just ordered to pay creditors more than $14 million after a forensic accountant found that he hid a small fortune in shell accounts before filing for bankruptcy. Selling the same artworks to multiple investors landed dealers like Larry Salander and Inigo Philbrick in jail.

But these are extreme cases. The lies most dealers tell aren’t illegal—or even close to illegal. They are simply part of doing business in an opaque industry where information is the most valuable currency. While often whispered about, they are usually impossible to dispute.

But in at least one case of a quotidian—and, it should be said, not illegal—misrepresentation, we have receipts. (More on that later.)

The past month has seen not one but three separate forays into the primary market by established Western auctioneers: Sotheby’s, Christie’s, and Simon de Pury’s namesake online platform. All three have caused some amount of consternation among industry insiders, particularly members of the gallery sector who already feel under siege from bigger beasts on both the buy and sell sides.

But are these initiatives actually the unholy threat that some market classicists see them as? Is each of them even as similar as they’re being made out to be? And either way, would their ethical and business impact look the same if viewed through a global prism instead of just a regional one?

The sad, previously unreported news that the beloved art-world power couple broke up in 2020 after a decade together, published just over a week ago in Page Six, was confirmed by the duo, who told the publication: “We ended our long-term personal relationship but remain committed to completing our current projects as Deux Femmes Noires.”

Curating for nonprofits is one thing; their business relationship is another. Because, as Wet Paint can exclusively reveal, their financial arrangement was not only good for Thomas, but also for Chevremont, who earned a handsome 20 percent sales cut on commissioned works she was involved in.

In the art world, Bonhams has long been considered a somewhat small-fry auction house, known for selling high-end cars and collectibles rather than trophy-level Picassos. But a well-thought out strategic repositioning, underway since the house was acquired by a private equity firm in 2018, has grown the business and positioned Bonhams to potentially rival its larger peers in the near future.

The secret? The leaders of the more than 200-year-old British auction house, including auction veteran Bruno Vinciguerra who is now global CEO, have been rapidly carving out a dynamic and fast-growing middle-market art business that could become a blueprint for success in the historically challenging niche.

Young, Green Collectors Are Driving the Art Market Explosion in South Korea. But Could a Growing Interest in Speculative Buying Be a Slippery Slope?

“It feels like collecting art is becoming a culture,” Noh JaeMyung, a 31-year-old South Korean collector and an education entrepreneur, told Artnet News. “Things are really changing in Korea… It’s not just rich people who are collecting art.”

Positive vibes aside, however, there are worrying signs, Noh observed. The experienced collector, who began collecting in his high school days in the U.S., noticed that prices of some artworks do not correspond to their quality, especially in the secondary market. He said some in South Korea buy artworks by certain artists simply because they have seen others buying them. “A lot of people don’t really care about art but they collect because they think art is just an investment. That’s definitely not healthy,” he said.

Which Galleries Represent the Most Powerful Biennial Artists? Here’s the List

Our examination of which artists have appeared in the most biennials over the past five years reveals that these international exhibitions constitute their own unique art world, largely distinct from the concerns of the art market and even museums.

Perhaps unsurprisingly, then, these artists are often represented not by mega-galleries, but by smaller, less brand-name dealers with more geographic diversity than one might typically associate with the megawatt contemporary art market.

As an infinitely more modest collector than most consignors to the recent sales—accumulator is a more appropriate word—I have regretted for years works that have escaped me simply because I wasn’t bold enough to step up and pay that extra bit needed. I have bought good stuff and bad stuff over the years but never regretted having bought something I coveted, even if coming up with the money to pay for it has at times given me nightmares.

In the 1980s, trophy works bought at stratospheric prices evinced Japan’s seemingly indomitable purchasing power. Then of course the bubble burst, and an endemic wariness has plagued all corners of the economy ever since. But for the art market at least, glimmers of hope may finally be on the horizon.

Perhaps most encouraging are indications that a post-bubble generation of collectors is emerging. It includes not only superstars like Yusaku Maezawa, but also less-celebrated enthusiasts who have learned lessons from the bubble days.

How Much Art Is Really, Truly Available at an Art Fair? Dealer Thaddaeus Ropac on the Myth, Machinations, and Methods Behind Pre-Selling

What’s the point of coming to an art fair if nothing is actually for sale?

It’s a complaint uttered by many aspiring art collectors, who, having finally worked their way onto the exclusive list of VIP preview day invitees, arrive at the fair to find that the goalposts are even further back, as galleries have already offered works to their own select client lists, and have sold everything on the booth before the fair even opened its doors. Still, some dealers insist that pre-selling does not happen, that business is just . We caught up with Austrian dealer Thaddaeus Ropac ahead of Art Basel Miami Beach to tackle some of the myths around pre-sales, get a little art-fair history lesson, and shine some light on the internal operations that make it all work.

A Decade After Its Failed Gallery Venture, Did Christie’s Just Dump Old Haunch of Venison Stock at a Provincial U.K. Auction?

An unexpected sale of works by top artists in the English countryside just before Christmas has left artists and their dealers puzzled, perplexed and—most of all—angry.

The little-known Bellmans auctioneers offered 147 contemporary artworks by artists of the caliber of former Turner Prize nominees Richard Long, Keith Coventry, Katie Paterson, Nathan Coley, Keith Tyson and Simon Patterson, at below-market prices and possibly without proper title. The works in the December 16 sale entitled “Expanding Horizons: A Collection of Contemporary Art,” were all solely provenanced to the Haunch of Venison Gallery, which Christie’s bought in 1997 and closed down in 2013.

I caught wind that Kimberly Drew, associate director at Pace and well-known person-about-town, would be attending the event, so I handed her a disposable to see what the week looked like. 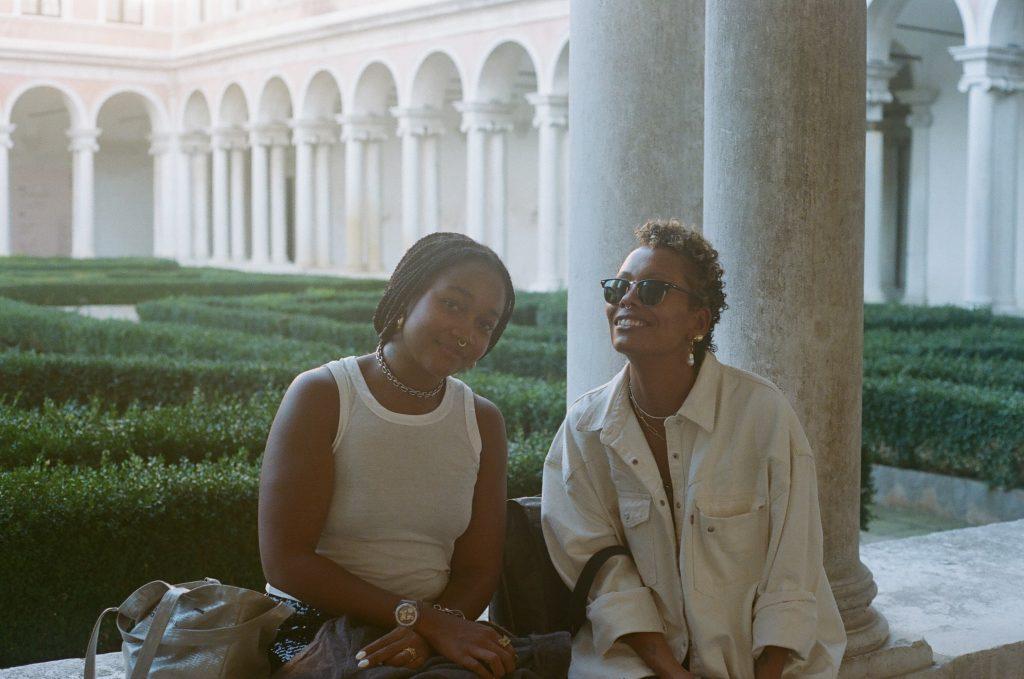 Me and my dear J after day one of the Loophole of Retreat. In the week before heading to Venice, J
texted me: “see you there?” and I was thrilled. As some may know, J and I co-edited Black Futures, our anthology about Black culture, but really about Black archival practices and community-building.
Downloading with J after our respective travels is one of my favorite things to do and being able to
download each day over pasta and tiramisu felt extra special.

Do Those Confiscated Paintings at the Orlando Museum of Art Actually Look Like Basquiats? Judge for Yourself