Home News ‘As an Empath, Portraiture Works for Me’: Amy Sherald Makes Space for... 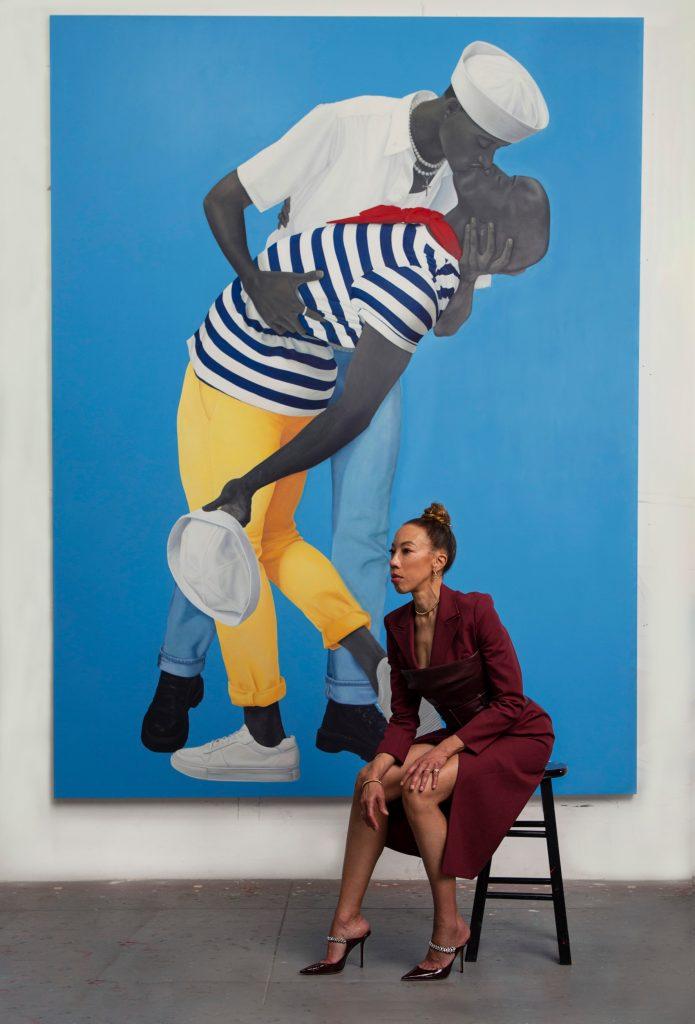 Two Black men on dirt bikes soar up through the air in the mammoth diptych Deliverance (2022), one of the highlights from “The World We Make,” Amy Sherald’s new solo show at Hauser & Wirth in London. Behind this powerful ascension we might imagine the roar of engines or yells of camaraderie but, frozen in motion, the scene is instead one of serene majesty.

When Sherald discovered dirt bike culture after moving to Baltimore in her 20s for her MFA, it left a lasting impression. When she asked her models what they loved about riding, they explained that it gives them a sense of freedom. “I read that as freedom from oppression,” she said, when I met her shortly after the show’s installation, just in time for Frieze week. 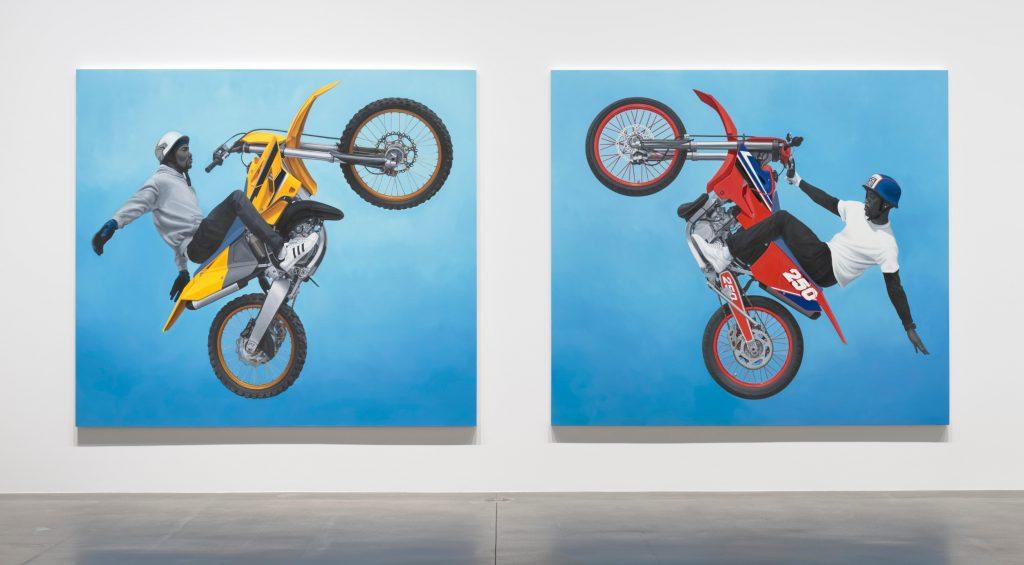 It feels fitting, therefore, that for her first show outside the U.S., Sherald’s work returns to the place where so many of these worn-out portraiture tropes of power and glory were born.

“When you look at art history and see how it exists from the caveman era all the way through to now, and then you see how recently African American art history started, it makes you feel a sense of urgency to take up space,” Sherald said.

“You can count the number of Black women figurative painters between Europe and the United States probably on two hands,” she added. “We’re essentially building a foundation to start this conversation that’s been going on without us for so long.”

Sherald’s art historical references are served with a refreshing twist. For one thing, bejeweled portraits from the past often feel weighed down by elaborate symbolism. Sherald’s figures, in their stylish contemporary dress, pop against monochromatic or minimally-rendered backgrounds.

The effect is to give each subject a singular clarity of voice, as our focus zooms in on pose, gesture and other more idiosyncratic identity cues.

“I don’t want the figures to be placed in a context where something can be read into their story,” Sherald explained. “Living as a Black person or a person of color, you automatically have that. There’s a context that’s placed around you that you have nothing to do with. I think that’s why I want there to be a deeper knowing of the figure.” 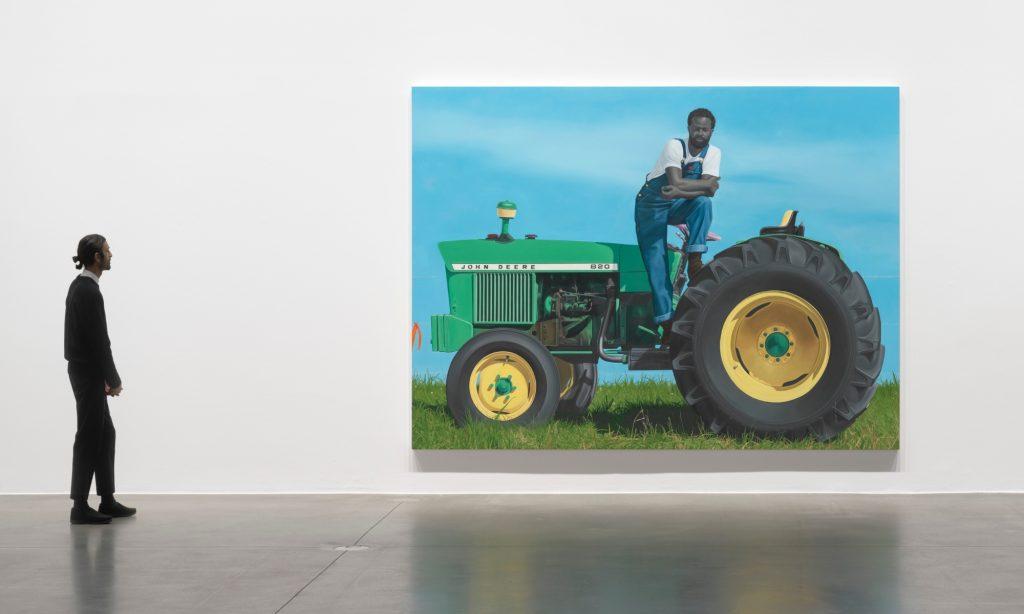 Instead, Sherald offers her sitters the space to communicate their own, new narratives. In A God Blessed Land (Empire of Dirt), a farmer looks down at us from up high on his tractor. The composition immediately recalls a long history of predominantly white land ownership being honored and recorded in painting and photography.

In this case the man, a friend of Sherald’s, is hoping to buy the land he has rented all his life. “It’s something that he really wants to give his children,” she said. “Stories disappear as the land disappears. The process, the ways the seeds were planted and why, what animals were grazed on the land—all that stuff is familial history as well as agricultural history.”

“It’s recognizing that the African American story is not separate from the American story, it’s central,” she added. “Farming has been a birthright, and food and farming have long been a form of resistance and ritual.”

Sherald, who recently turned 49, breezily told me that her lifelong interest in portraiture is “just because of what I was exposed to as a child. I didn’t know who Jackson Pollock was.” Instead, she recalls searching through encyclopedias from which she gleaned a pretty old school understanding of art.

“As an empath, [portraiture] works for me,” she later admitted. “Although part of me can’t wait until I’m 70 and start making some crazy paintings.”

Her horizons were expanded at art school, where she recalls the excitement of discovering work by contemporary artists like Jenny Saville, Hank Willis Thomas, Eric Fischl, and Odd Nerdrum—“He was my guy in grad school, I wanted to be like him!”

More impactful still was her research into photography and cinematography. “Those were the images where I was able to see people that look like me,” she recalled. The Black Female Body: A Photographic History by Deborah Willis “always hung out in the back of my mind when making work,” Sherald said.

She also opened herself up to a wide range of everyday influences during a period she recalled as “looking, just looking. I’d sit in the library and just flip through books about anything and everything, from jazz to cooking.” 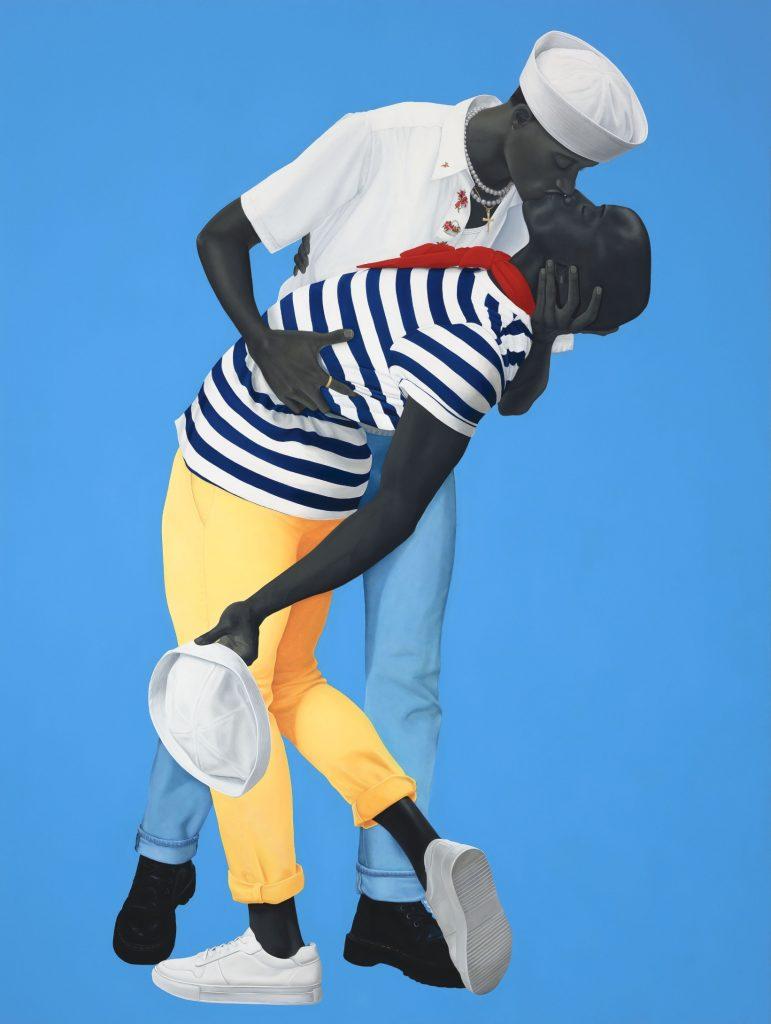 It is this broad interest in popular culture that prompted Sherald to reimagine Alfred Eisenstaedt’s iconic V-J Day in Times Square photograph from 1945. As Sherald points out, there are countless kisses in the history of art, but the swooning moment of passion shared between two Black men in For love, and for country still manages to show us something compelling and new.

Her latest body of works features plenty of the same close-cut character studies, like that of Michelle Obama, which have become Sherald’s trademark and seen her work compared to that of Barkley L. Hendricks. The power of these seemingly simple images spoke for itself when her portrait of the former first lady went viral in 2018. The effect was to give Sherald’s carefully honed practice, which had been faring well on the private gallery circuit, its own pop-cultural weight. “I was able to speak to a broader audience, which is very special.”

More recently, Sherald has been picking out models from among her friends and family, and He was meant for all things to meet features a 16-year-old nephew in his lacrosse uniform. He is the first Black student president at his high school, she proudly noted.

“I was searching for people who are and have the kind of life that provides present and future hope,” she said of why some subjects “call to her” over others. 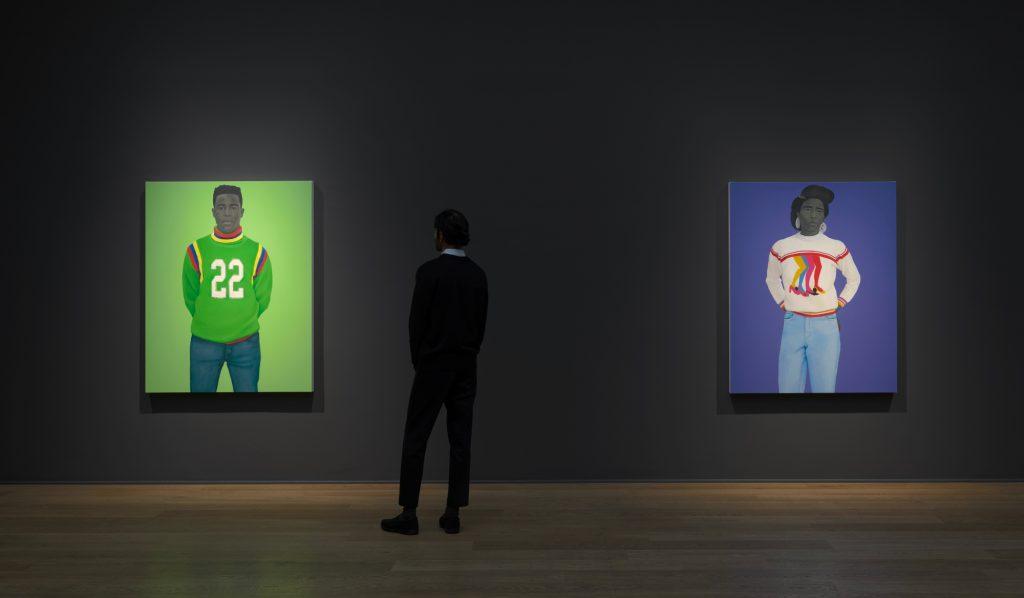 Installation view of Amy Sherald, He was meant for all things to meet (2022) and To tell her story you must walk in her shoes (2022) at Hauser & Wirth London. Photo: Alex Delfanne. Courtesy the artist and Hauser & Wirth. © Amy Sherald.

“I really believe there’s a transference of energy from a model to the painter to the brush to the canvas,” she explained. “There’s some people that I’ve photographed that didn’t feel like they were weighted enough or there wasn’t enough… not life, but maybe a weathered soul. He’s a young man who takes life seriously and I just felt moved to paint him. It’s an intuitive thing.”

Sherald considers exhibiting outside the U.S. to be her greatest achievement since the triumph of her Obama portrait, describing it as a lifelong dream. I got the impression, however, that her eyes are already set on the next prize.

“To be here is exciting,” she said, “but because I’ve been here already in my head for 35 years, it’s just like checking it off. It’s done.”

Reasons Why It’s So Important To Preserve Artifacts Properly