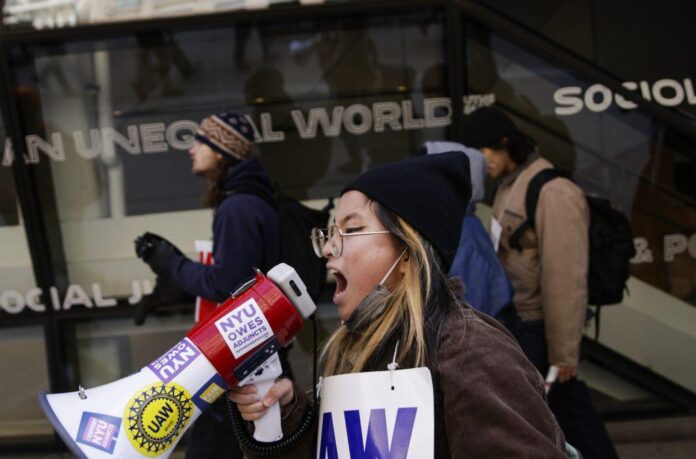 The bitter three-week strike by part-time faculty at the New School, which includes the Parsons School of Design, is now the longest strike by adjunct workers in U.S. history. As negotiations between UAW Local 7902 and the administration enter a crucial make-or-break period, a new controversy erupted over whether the administration has been preparing to bring in temporary replacement instructors—scabs, in union parlance.

Over the weekend, a leaked email purportedly written by the New School’s Talent Engagement Coordinator began circulating online. “The New School seeks to bring on a group of temporary Progress Reviewers,” the message began. “I would like to know if any of your instructors are interested in this temporary remote position before the holidays.”

Qualifications included a Master’s degree, “Experience teaching, tutoring and/or curriculum design experience,” and “Ability to respond well in a high-stress environment.” All work was set to be done remotely, via Zoom or the New School’s in-house portal Canvas.

The swift backlash from supporters of the striking faculty and concerned students provoked the New School to respond online, disavowing the letter.

“We want to be clear that this was not a university approved message and was sent out by mistake,” wrote Tokumbo Shobowale, the New School’s executive vice president for business and operations, in an official post on the university’s website. (It is not known who leaked the message.) “It is incorrect and does not reflect a final, accurate, or official version of the university’s intended plans, and we understand how difficult it has been for some people to read it.”

Shobowale’s post, however, stressed that the university was indeed considering all its options as the strike continues: “in case the union decides to continue its strike for an extended period—something we are trying hard to resolve with a fair and financially responsible new contract—we must consider a range of potential options to ensure our students’ academic futures are secure.”

The union was quick to denounce the threat via social media.

In the wake of the news, a pledge by New York City-area professors not to cross the picket line at the New School—or any other university where adjunct faculty were on strike—circulated widely. It has attracted more than 600 signatures at the time of this writing.

The labor negotiations at the New School are now being overseen by a federal mediator, and are at a pivotal juncture, given that both grades and tuition for next semester are soon due. The school will start withholding wages from strikers starting tomorrow.

The administration claims that it cannot afford the union’s big demands. The New School has long been financially troubled, with a 2020 report in the describing it as having reached “the point of existential crisis.”

The union, meanwhile, criticizes administrative bloat and poor management. It says that members must see greater improvement in salaries and benefits for a deal to work. A report today in the described how one Parsons part-time faculty member survives only due to food stamps and other assistance.

Paris Internationale fair once positioned itself as a cooler alternative to Fiac—will Art Basel’s presence change that?