Home News Can a Sculpture Dance? Here Are Three Things to Know About Artist... 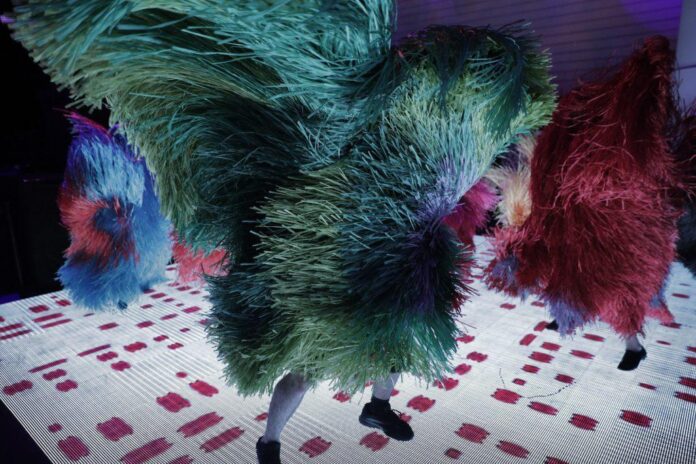 At first glance, Chicago artist Nick Cave’s Soundsuits are colorful, even jubilant, spectacles. Made from all manner of materials—woven synthetic hair in kaleidoscopic hues of fluorescent green and hot pink, ceramic birds, glitter, and bundles of twigs—these often-wearable costumes often resemble mythical storybook creatures or sci-fi aliens. But despite their awe-inspiring appearance, these sculptures were initially born as a response to complex social and political realities. Cave, who was born in 1959 in Fulton, Missouri, created his first “sound suit” in 1992 in the aftermath of the Rodney King beating. “It’s amazing how something so profound can literally shift your direction of thinking and making,” the artist related in an interview with Boston’s Institute of Contemporary Art.

Walking in the park, the artist intuitively began collecting twigs and used them to construct an elaborate costume. When worn, the costume made its own unique sounds—and the Soundsuits were born. Over the past 30 years, Cave has created over 500 Soundsuits, elaborate sculptures which draw inspiration from African tribal regalia and even medieval capes. The artist sees these works as a kind of protective armor, disguising the wearer’s race, age, and gender; meanwhile, their sensorial richness dazzles the viewing public. Currently, the Museum of Contemporary Art Chicago is hosting “Forothermore,” a survey exhibition of Cave’s artistic output, including several of his iconic Soundsuits.

To mark the 30th anniversary of the creation of the first Soundsuit, we decided to take a closer look at this pivotal series and found three facts that may let you see them in a more complex way. 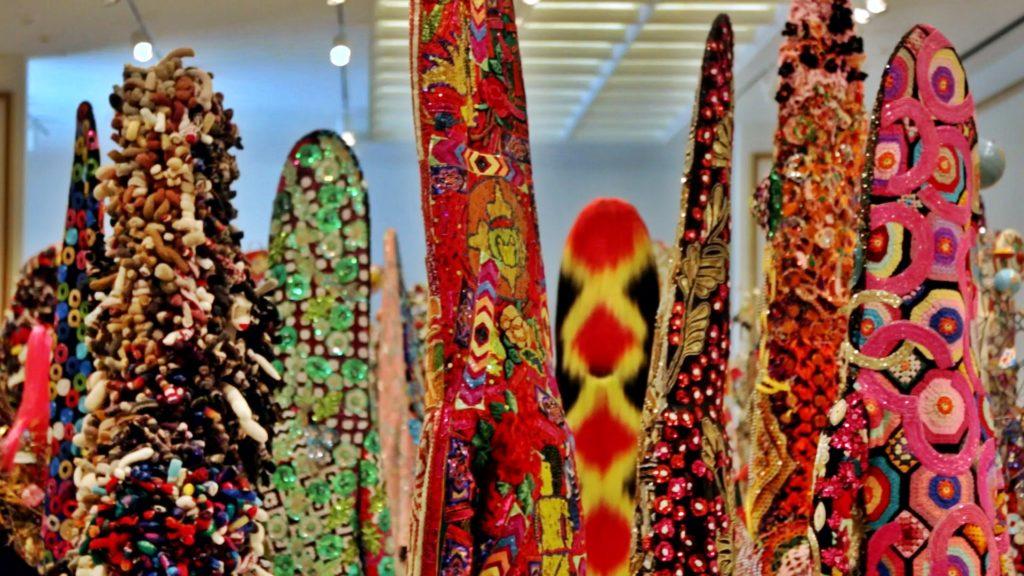 Today the director of the graduate fashion program at the School of the Art Institute of Chicago, Cave came by his talent for transformation early. The youngest of seven boys raised by a single mother, Cave grew up wearing hand-me-down clothing. “You have to figure out how to make those clothes your own…That’s how I started off, using things around the house,” Cave said in a 2009 interview. Cave’s mother encouraged his creative forays and his experiments with fabric, and the artist vividly recalls the imaginative power of the sock puppets she made him. “The transition from the sock being just a sock to it becoming my best friend at that moment was so enormous and yet so simple for me as a child. How do we get back to that innocence? How do we get back to that place of dreaming?” the artist asked.

The Soundsuits Recast Humble Materials in a Starring Role 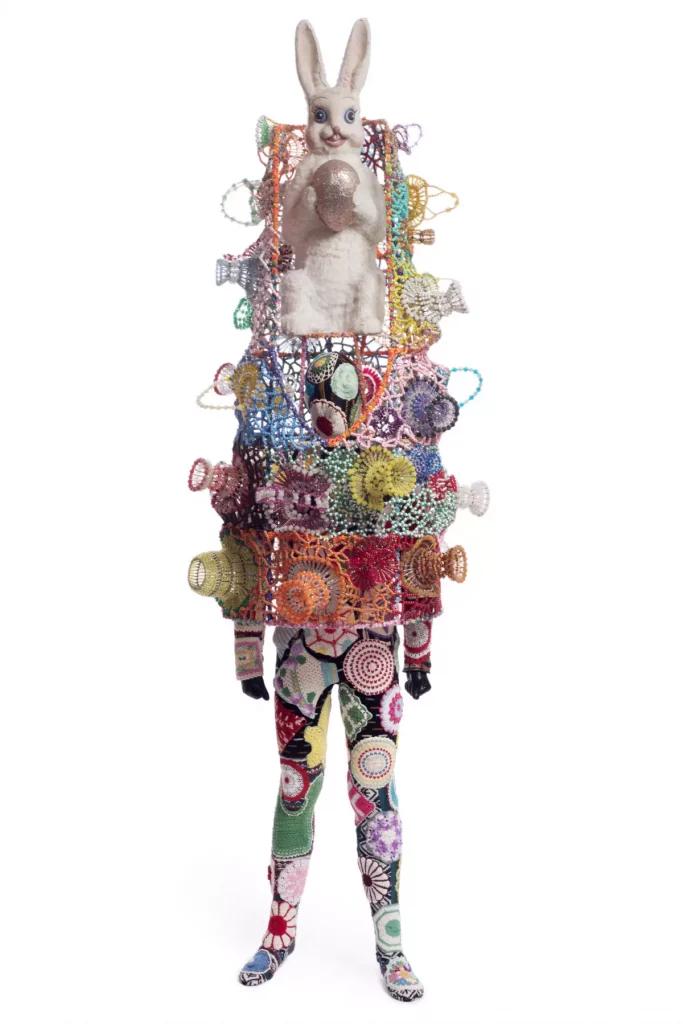 Just as the first Soundsuit was constructed from twigs found in a park, Cave still scours the world around him to collect the objects which compose these sculptural, mixed-media costumes. Though the Soundsuits may appear otherworldly, the sculptures are composed of everyday materials—plastic buttons, feathers, sequins—that create a tension between the familiar and the imaginary. The artist describes the Soundsuits as his way of “lashing out” at a world that often devalues individuals based on factors of race, sexual orientation, class, or gender. Much the same, Cave subverts traditional definitions of fine art, by creating objects that cross between sculpture, fashion, and performance.

“I found that I was interested in was this whole idea of the discarded. I started gathering materials at the flea markets and the antique malls. And so, for me, it’s me sort of taking these objects and reintroducing them and giving them a new sort of role,” said Cave in a conversation with the Museum of Modern Art. “A lot of the things that you will find in a Soundsuit are things that we all recognize. You know, how do we look at things that are devalued, discarded, and bring a different kind of relevancy to them.”

They Can Be Additionally Activated by Dance 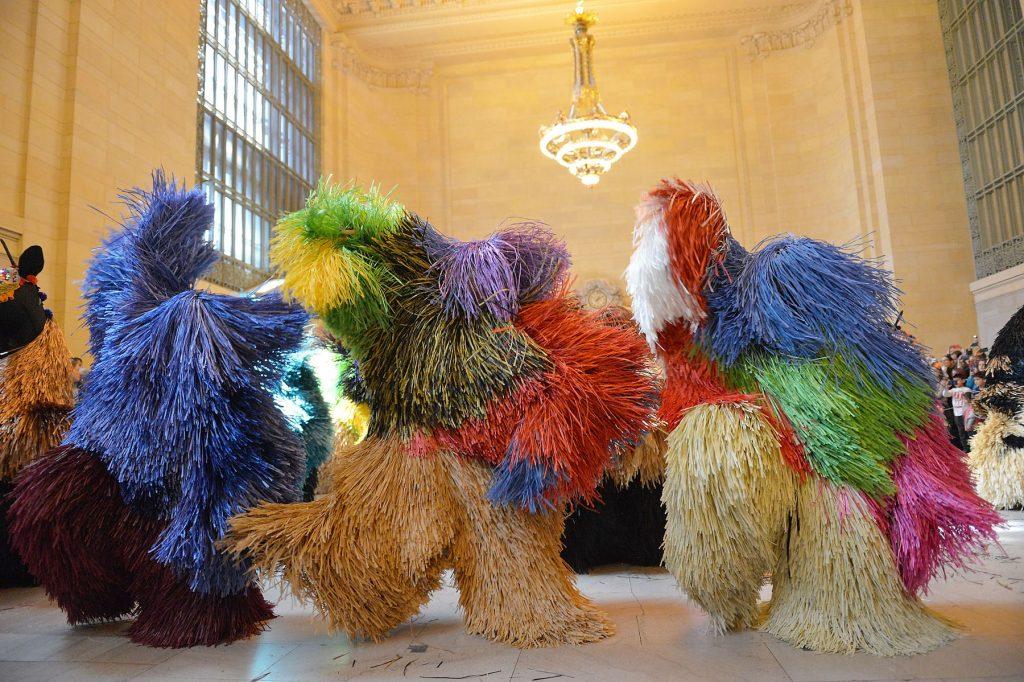 Before he became a visual artist, Nick Cave was a dancer who trained with the Alvin Ailey American Dance Theater. That passion for dance buoyed the artist as he began his career, spending hours in clubs, dancing alone, and working through his thoughts.

Over the years, the artist has organized numerous performances with his Soundsuits. While not all Soundsuits are intended to be worn, many have been made with performers in mind. In 2013, the artist choreographed the site-specific performance “Heard NY” in collaboration with 60 dancers from the Alvin Ailey School at New York’s Grand Central Station. These particular Soundsuits were made of colorful, ruffling raffia in forms resembling life-size horses, each costume worn by two dancers. Together, the 30 horses—a herd—referenced the New York Metropolitan Transit Authority’s use of horses for transportation in the early 1900s. The performers would spontaneously break into dance throughout the famed transit hall.

More recently, Cave has been orchestrating Soundsuit performances with underprivileged children. The sculptures, which can weigh up to 40 pounds, are meant to transport the wearer into a space of dreaming and revelation. Cave recalled trying on his first creation, saying, “I was inside a suit. You couldn’t tell if I was a woman or man; if I was black, red, green, or orange; from Haiti or South Africa. I was no longer Nick. I was a shaman of sorts.”