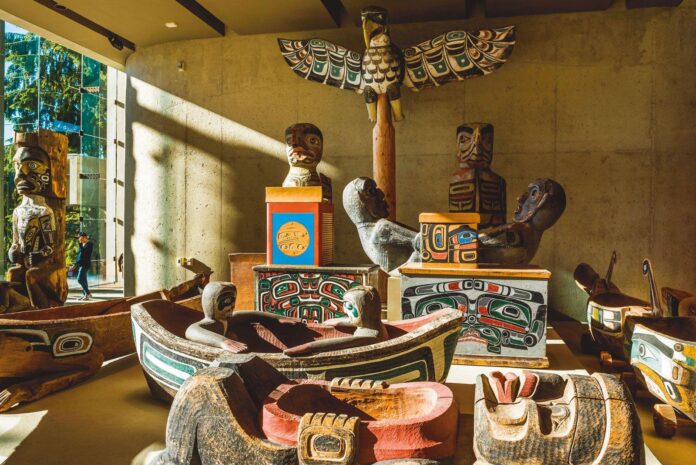 The Canadian Museums Association (CMA) has issued a groundbreaking report calling for support for Indigenous-led organisations, initiatives and self-determination at every level of museum operations and within all museum positions. While the report calls for repatriation of Indigenous belongings at Canadian institutions, it “goes far beyond repatriation” and includes the principle that self-determination is defined as Indigenous groups “obtaining control over the full set of rights to govern themselves in all aspects of their political, social, economic and cultural lives”, CMA director of communications Rebecca MacKenzie says. The report urges legislation and funding so that Canadian museums can better partner with Indigenous peoples and become compliant with the 2007 United Nations Declaration on the Rights of Indigenous Peoples (UNDRIP). Canada enacted legislation to align itself with the declaration in 2021.

The CMA wants permanent, “reliable funding for Indigenous-led organisations and cultural centres to ensure the presence of Indigenous leadership that museums can partner with”, MacKenzie adds, “and a larger government investment overall” to support UNDRIP implementation.

The report responds to a 2015 call to action issued by Canada’s Truth and Reconciliation Commission (TRC), which requested federal funding for the CMA to partner with Indigenous peoples to review Canadian museum policies and practices and make recommendations for museums to become more UNDRIP-compliant.

The CMA recommendations call for legislation and funding to support repatriation, development of cohesive collections strategies and a national strategy for professional development for museum professionals to better implement UNDRIP principles. Museums should adopt “meaningful Indigenous governance with decision-making authority” rather than simply having “advisory bodies”, the report says. The report comes in the context of Canada’s ongoing examination of historical practices towards Indigenous peoples, documented in the 2015 conclusions by the TRC. It found that, for more than a century, the country sought to suppress Indigenous governments and rights in an effort to promote assimilation, including at residential schools where thousands of children died in what the TRC described as a “cultural genocide”.

“Museums and colonial endeavours are inextricably linked to the erasure of the histories of Indigenous Nations,” the CMA report states, including “the extraction of Indigenous ancestral remains and cultural belongings”. It adds that, based on testimony of Indigenous communities and current collections data, “the frequency and quality of repatriations from Canadian museums does not comply with UNDRIP” because, among other reasons, the “power… [is] still held by museums” on policies and collections, “making repatriation difficult” for Indigenous communities.

“Museums need to give up their sense of ownership and get past the sense of fear in giving up their ‘stuff’”, the report states, quoting from a 2021 community engagement roundtable at Burnaby Village Museum in British Columbia, one of a series of events involving Indigenous communities, Indigenous museum professionals and partner institutions that were consulted for the report.

A 2019 government survey indicated that about 6.7 million Indigenous cultural artefacts are housed at heritage institutions nationwide—about two million in each of Ontario, Manitoba and Québec, and about 310,000 in British Columbia.

The report says that items to be considered for repatriation include not only ancestral remains and cultural belongings, but also associated information such as “results of research, photographs, works of art, maps, archival documents, songs, plants, seeds, language recordings, digital material”, and anything else related to the “traditional knowledge, cultures, histories and intellectual property” of Indigenous peoples. Museums are to recognise that “Indigenous peoples have intellectual sovereignty over all material created by or about them”, as well as “the right to control access” to the material.