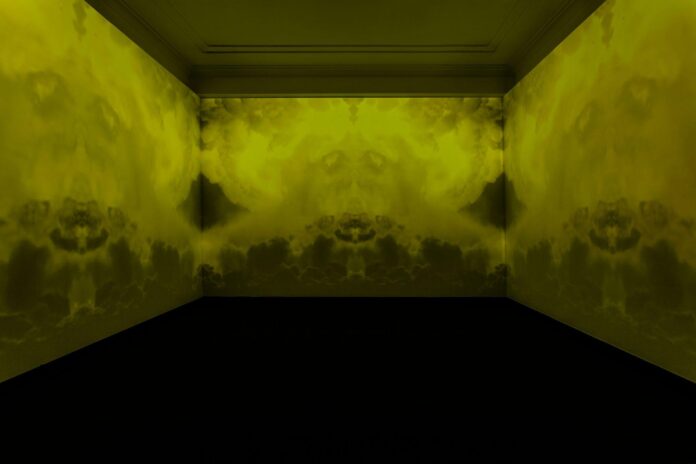 At a time of heightened concerns about nuclear warfare, an exhibition at The Bass in Miami Beach underscores the cyclical nature of war and highlights the United States’ nuclear legacy. Featuring new video, sculpture and installation pieces by Cara Despain, Specter (until 18 September) explores the history of nuclear weapons development in the US, including mining and testing, and how this legacy can provide a lens through which to view the war in Ukraine and the current threat of nuclear conflict.

Despain’s work often addresses large-scale issues hiding in plain sight, including industrialisation and the legacy of empire building. Inherent in these narratives is the US government’s history of concealing classified information, in particular during the Cold War. “Things like territory expansion, the climate crisis, and development of our nuclear arsenal—while carrying both visible spectacle and global impact—remain largely obscured in our day-to-day collective psyche,” the artist says.

Having grown up in Utah in a region near atomic testing sites, Despain was familiar with stories of locals going to watch test detonations, and the health issues that followed. Accounts of irradiated food and sick people and animals were disputed or ignored. While familiar to her, she found that this part of history was not commonly known. “As an adult, I’ve come to realize that many people in this country—even nearby to the region—have little to no knowledge that above-ground testing took place in the continental US, let alone to what extent, or that the uranium used to build weapons was extracted from largely the same region, with severe and ongoing consequences.”

Despain used declassified and archival material, including films documenting the tests, satellite imagery of the Nevada test site and Department of Civil Defense educational films to tell the little-known history. “Art is the pathway I have, and I think the material speaks for itself. I wanted to convey the history without mediation and to contextualise it in a setting that is both cinematic and haunting. I think people are much more open to taking in information and history if they feel something first,” she says.

Welcoming visitors to the exhibition is house of cards (2022), a film featuring an ominous loop of end title cards from educational films that read “The End” over and over. The films were both informational and propagandistic, educating the public on how to protect against nuclear fallout while also advocating for nuclear technology.

Next to this piece is under the rainbow, behind the curtain (2022), an installation made of cabinets filled with Depression-era glass and shaped to resemble an Art Deco theatre façade. Despain was interested in conveying the sense of anticipation and excitement that the period embodied. “Design in the early 20th century was tinged with glittery futurism and felt like a celebration of building the American Empire,” she says. “That was abruptly squashed by the Great Depression, followed by the Second World War. Art Deco is connected to Old Hollywood, theatre and cinema design, which are inspirations of mine. I also liked the connection to the Art Deco architecture that Miami Beach is known for, and that again has many connections to empire-building.”

Adding a cinematic, performative quality to the installation are the Depression-era, domestic glass items arranged inside the cabinets, which emit an otherworldly green glow. Though seemingly unnatural, the haunting glow is a result of uranium oxide that fluoresces under UV light and was used as a colorant before being banned in 1942 to support the Manhattan Project’s efforts to develop atomic weapons. The central cabinet frames a receding archway that pulls the viewer in, directing them deeper into the exhibition space. “The archway is a direct reference to The Wizard of Oz and the long hallway to the Throne Room that Dorothy and the others are seen walking down once they have been sent in to see the wizard,” Despain says.

The overall result of the theatrical, glowing design is haunting. While it may be tempting to feel removed from the stories being told, they are grounded in our present reality. “The conflict in Ukraine coinciding with my exhibition about the US’s nuclear legacy allows history to be a lens to the present,” she says. “It provides an example of how clear and real the threat of nuclear conflict still is, while also reminding, or in some cases teaching, of the less visible, long-lasting devastation.”