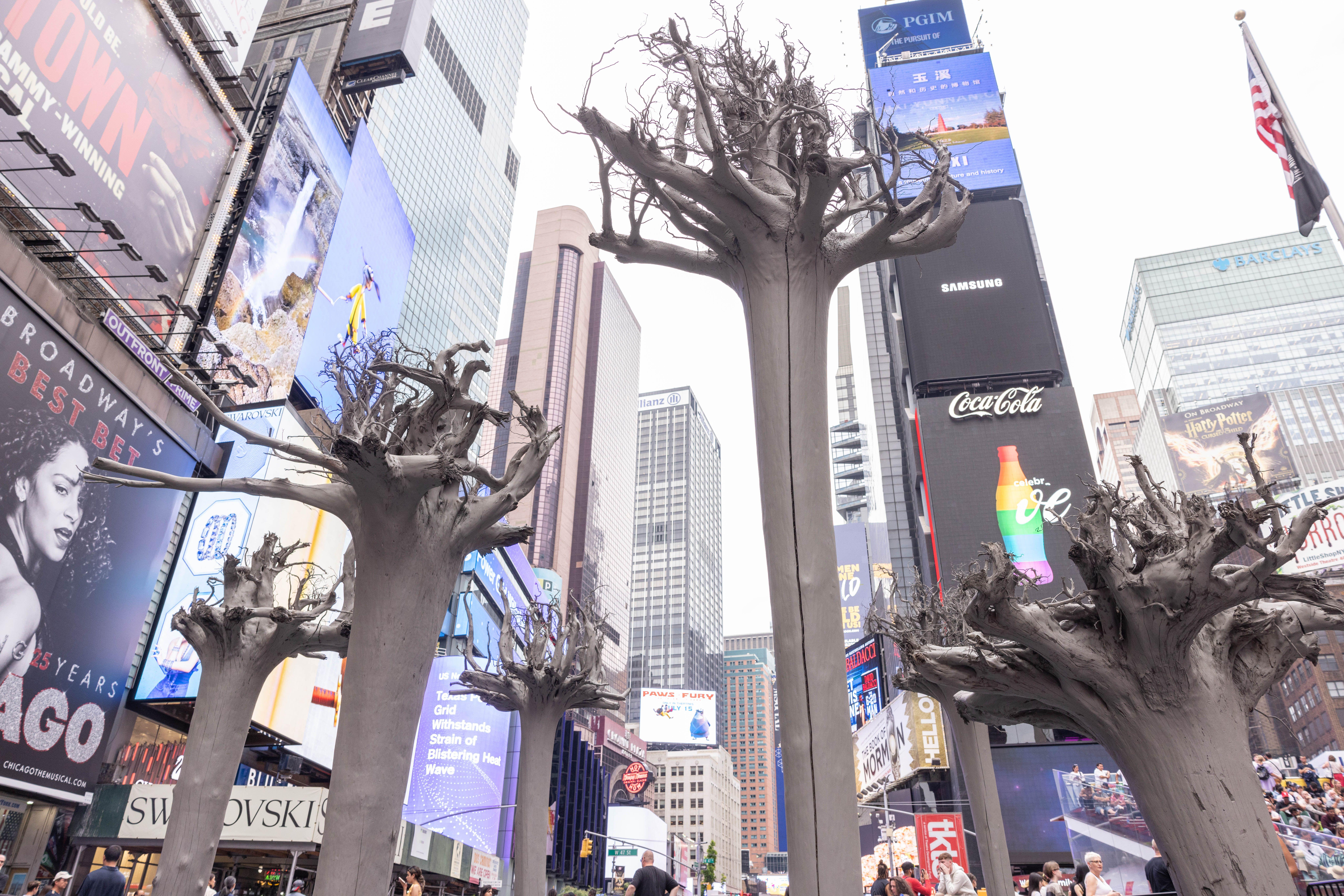 Surrounded by the flashing lights and supersaturated billboards that characterise New York City’s Times Square, it is surreal to consider that four centuries ago, the hyper-capitalist hub—then Lenape land—was a forest teeming with wildlife. The site’s jarring evolution since its colonial settlement sets the stage for the first installment of a momentous three-chapter public art project by the artist Charles Gaines, titled The American Manifest.

In this new work, Gaines, who is recognised for his innovative conceptual practice that elucidates the relationship between subjectivity and objectivity, grapples with the history and enduring legacy of colonialism, Manifest Destiny, slavery and racial capitalism.

The monumental project marks a pivotal moment in the artist’s career and is the amalgamation of eight years of research, iterative conceptual investigation of sociopolitical structures, and collaboration with the public art programme directors Justine Ludwig of Creative Time, Jean Cooney of Times Square Arts and Meredith Johnson of Governors Island Arts.

Gaines unveiled Chapter One of the serial project in Times Square last week (13 July). The work includes an act in two parts: a site-specific sculptural installation and a performance. The sculptural work, titled Roots, comprises seven inverted American Sweetgum trees, a species once native to the area, that are dried and painted to haunting effect. Backgrounded by a dizzying array of LED-branded architecture, the work analogises the pervasive repercussions of America’s legacy of cultural displacement and violent subjugation of property for capital gain.

The latest iteration, consisting of five parts that includes a new vocal arrangement, is based on the landmark 1857 Dred Scott decision, which ruled that all people of African descent, whether free or enslaved, were not considered citizens under the US Constitution. The decision, which was not overturned until the 14th Amendment in 1868, is a harrowing example of the failures of the law and the calculated perversion of logic as a tool for enforcement and oppression.

Originally conceived as an opera, the work was performed on Wednesday and Thursday evenings by a woodwind quartet, a piano, and a tenor, who performed the final portion—an 1857 speech by abolitionist Frederick Douglass—to riveting effect. The selected texts—including Chief Justice Roger Taney’s majority opinion and Justice Benjamin Robbins Curtis’s minority opinion—were scrolled on a screen staged behind the musicians in stark contrast to the surrounding landscape. Passerbys and audience members alike gathered at the square to bear witness to the public performance.

Engaging with these texts, Gaines excavates the contradictions of a flawed American narrative—a “land of the free” that is powered by insidious, complex systems of subjugation to uphold white supremacy. Through a contemporary lens, the artist draws parallels between history and the present, illuminating the fault lines in the country’s foundation and how they continue to pervade today.

“Charles is addressing pressing contemporary themes, and to see his work placed out in the center of this contemporary landscape in Times Square, particularly the Manifestos series, gives us these access points and glimpses into why we may be where we are now,” Cooney says.

The swells of sound facilitate the comprehension of the text—and have the dual effect of underscoring the transcripts to elicit a sentimental response while contending with the notion that empirical systems must yield an objective result. Despite being created using a systematic process, “the musical relationship to the text feels intentional”, Gaines says. “It’s not difficult to draw links between the aesthetics of the music and the concepts that the text provides.”

By extension, Gaines draws a critique of the malleability of the supposedly rigorous, empirical structure of law to justify pre-existing ideologies. “Reading the decisions—the majority of opinions, even the minority opinion, is nonsensical,” Gaines says. “It is only illogical because it fails to deal with the lived experience of people.” He points to the application of flawed logic, the inherent limitations of systems, and the way that meaning is attributed by fulfilling our presuppositions and intentions.

“You can see how this fiction has been applied rationally, and you see this rational argument unfold based on this fiction. You can feel they feed the truth,” he says. “From my standpoint, the system of this application is irrational, but to a person with a vested interest, where that system conforms with their point of view, it doesn’t seem irrational. So there’s a certain intentionality and purpose when it performs your point of view.”

Gaines adds, “The question is, is there a reality? Reality is discursively produced. It’s an agreement.”

The American Manifest will take place in three sites over two years, tracing a path along the northeastern waterways from Times Square to Governors Island to the Ohio River in Cincinnati, Ohio—significant for its dual history of transporting enslaved people and later serving as a pathway to freedom from southern slave states to the free northern states.

Roots is on view until 23 September, and in October the second chapter of the project—a 100-ft. kinetic installation titled Moving Chains will be installed at New York City’s Governors Island. Next summer, the final installment of the project will launch on the banks of the Ohio River.

What the arts do to help Ukrainian refugees?