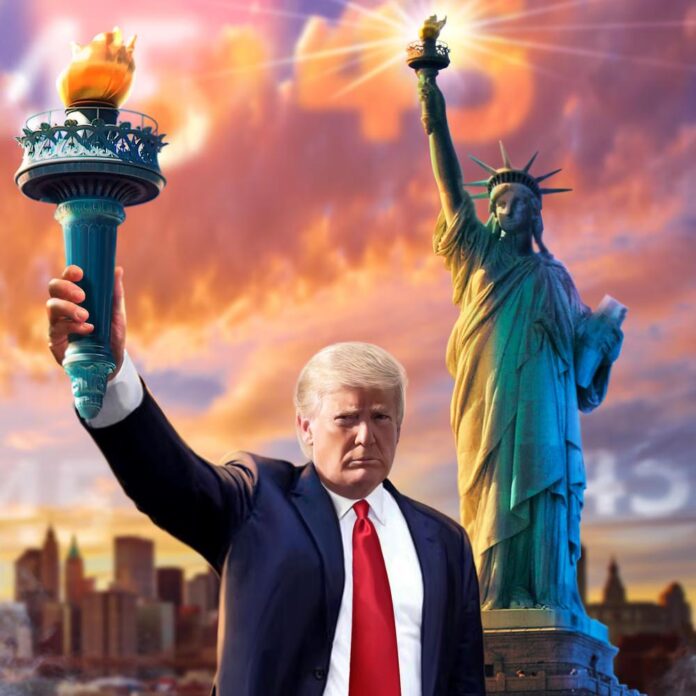 Former President Donald Trump has sold a lot of self-branded products in his day. Trump Ties. Trump Steaks. There was even a short-lived Trump Shuttle airline. And now, Trump NFTs—excuse me, Trump Digital Trading Cards.

The collection of 45,000 non-fungible tokens depicting Trump in absurdly heroic poses, each priced at $99, sold out within a day of last week’s “major announcement” of the drop. Political commentators had been expecting news surrounding Trump’s third presidential campaign. Instead, we got JPGs. Thousands and thousands of them.

There was also Trump standing in front of Mount Rushmore, his visage added to the monument, rechristened Mount Trumpmore, or at the Hollywood sign, which now reads Trumpworld. 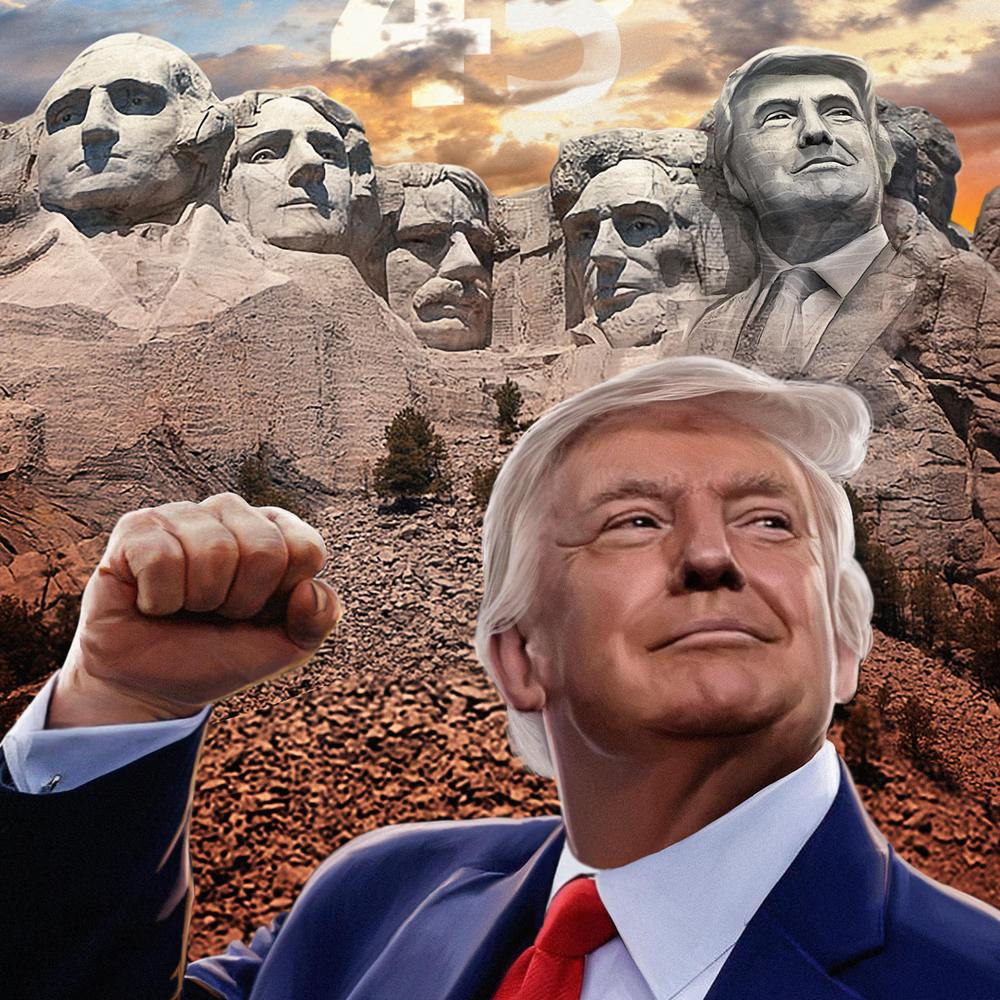 In a rare nod to realism, there’s Trump the golfer. (Some cards double as ads for Trump golf courses, with backdrops of his greens in Dubai, West Palm Beach, and the Bronx.)

“Unlike fan art you may see elsewhere, these are the first authorized Trump Digital Trading Cards ever created,” the FAQ for the project reads. (The drop also coincides with a sweepstakes to win a one-on-one meeting with Trump.)

“Essentially, these are personal digital collectibles or ‘trading cards’ that you can collect, accumulate, trade, etc.,” it explained. “Think of them like traditional baseball or basketball cards, but stored digitally so you never have to worry about physical damage.” 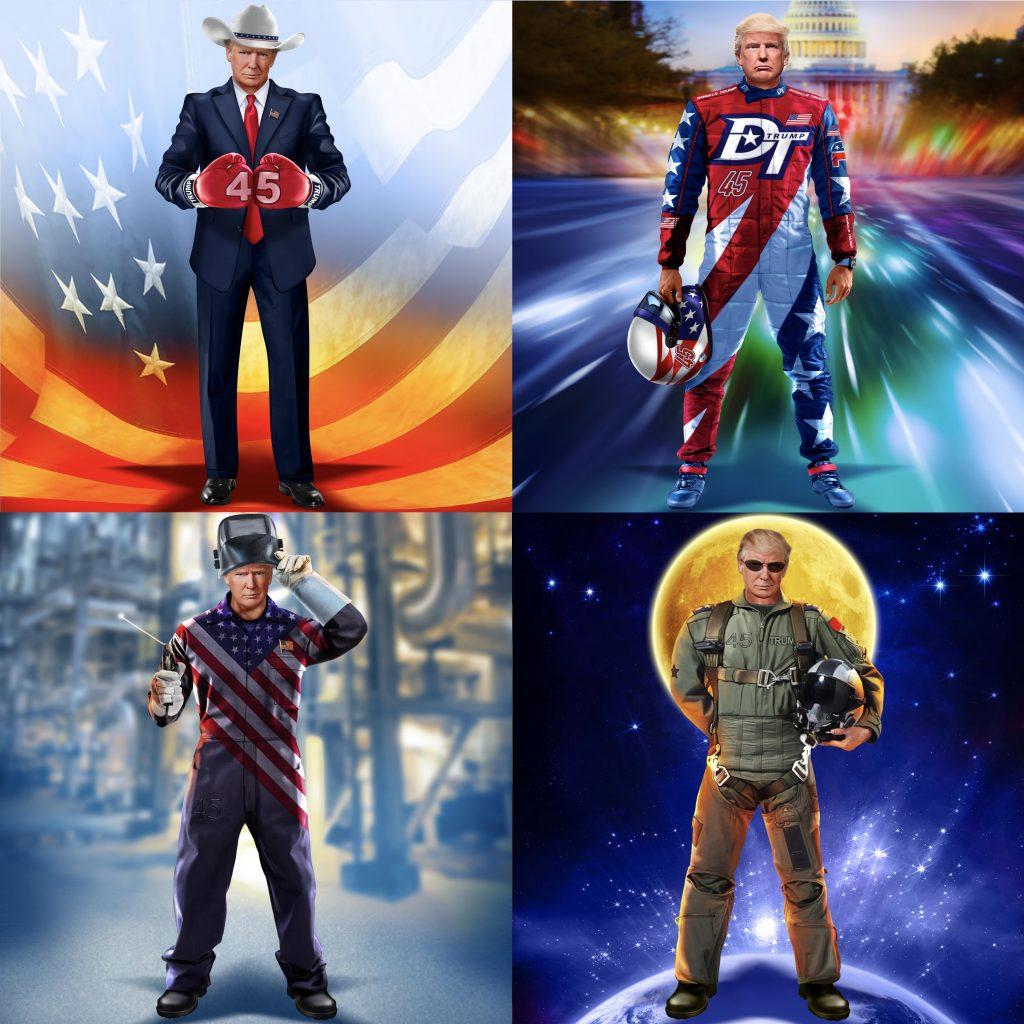 Perhaps the most absurd image is of Trump shooting lasers from his eyes as he tears open his suit, Superman-style, to reveal skintight spandex emblazoned with a “T” logo. (The former reality TV star probably didn’t realize the look also invites comparisons to Homelander, the murderously egotistical superhero antagonist of the hit Amazon Prime series .)

To create the artwork for the series, Trump and his team tapped Clark Mitchell, an artist perhaps best known for his work in the Star Wars universe, creating official illustrations for crossover advertisements with companies like Pepsi and Hasbro. 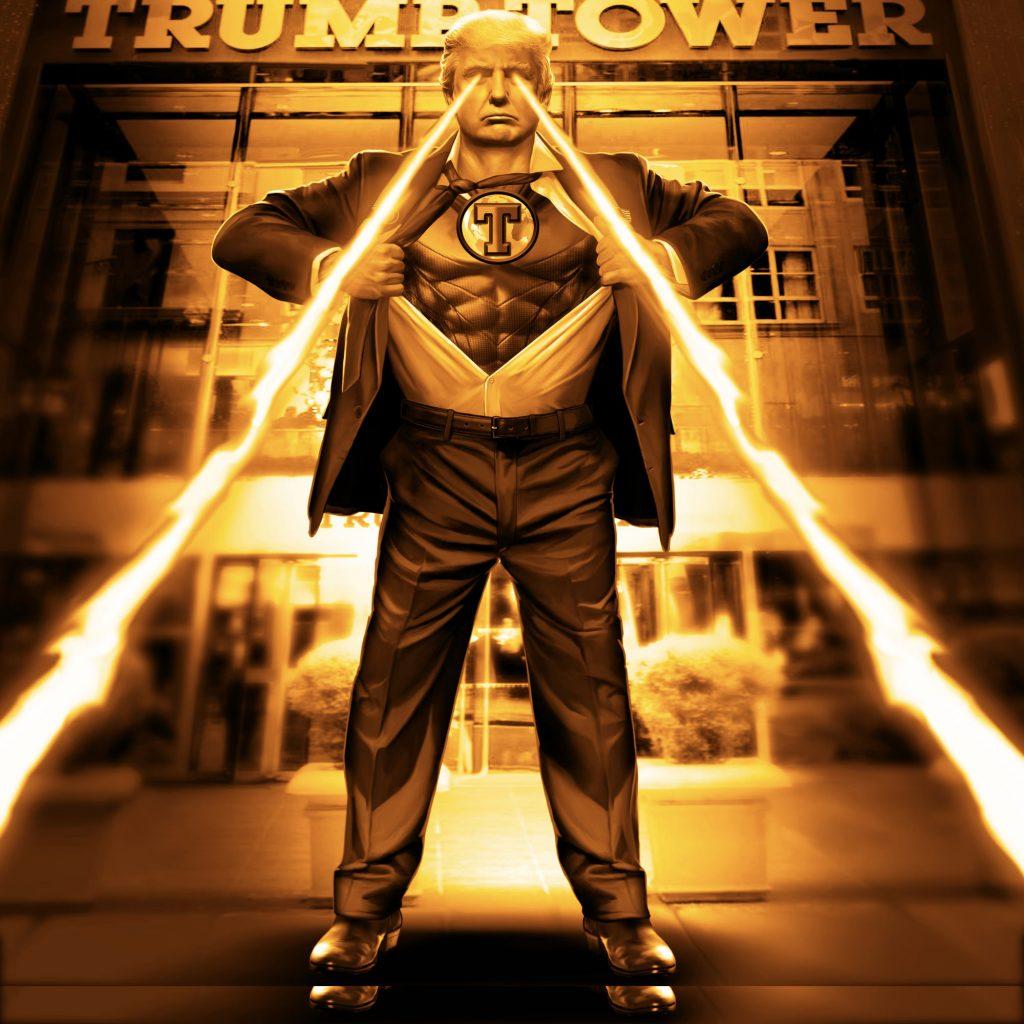 Mitchell has also become something of a favorite for celebrity NFT projects, having created artwork for drops by the likes of tarnished baseball star Pete Rose and the aging action movie hero Sylvester Stallone.

In particular, the 2,515 NFTs of Trump revealing his superhero costume are a close match to a design Mitchell made for R&B singer Ginuwine in the classic Superman pose. Since the Trump drop, Mitchell removed Instagram and Twitter posts of the lookalike artwork.

The artist did not respond to inquiries from Artnet News. 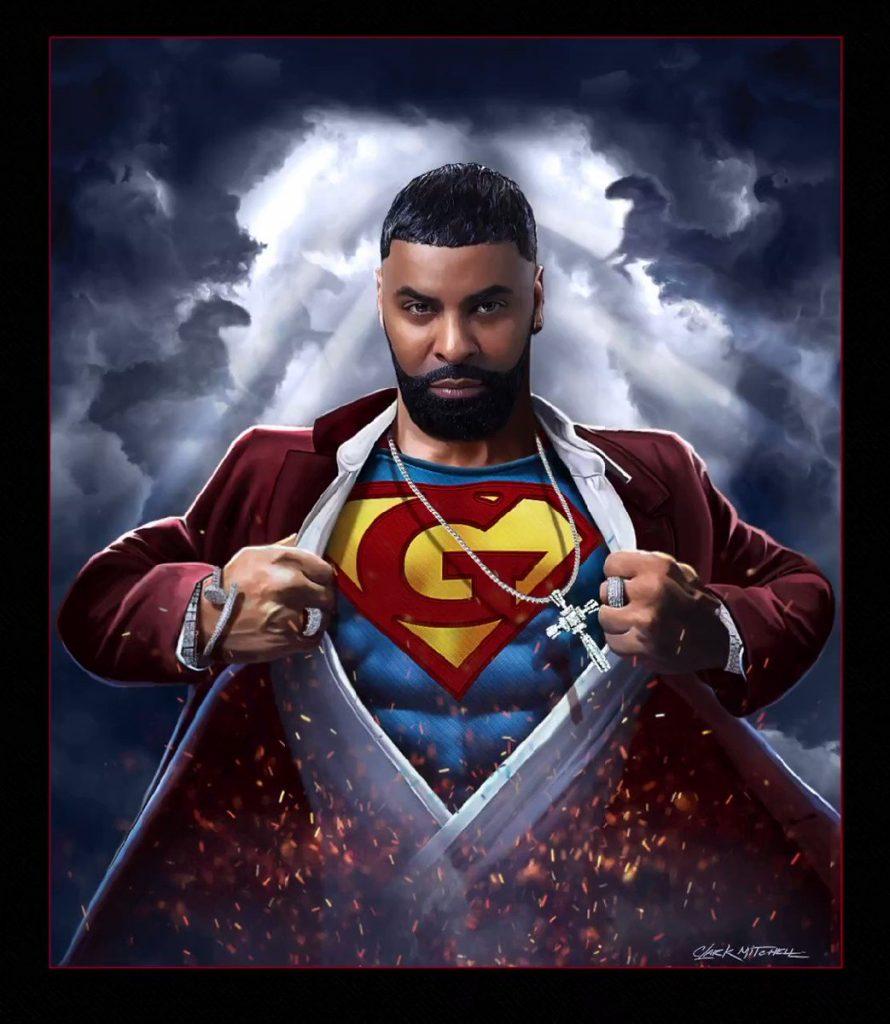 Clark Mitchell, Ginuwine NFT. The pose bears a striking resemblance to the artist’s designs for the Trump Digital Trading Cards.

As has become the norm with large NFT collections, there is a standard template with attributes of varying rarity, including 179 one-of-ones, which represent 0.4 percent of the images. These include “Trump Force One” flying above a Trump figure with outstretched, comically oversized hands. (The former president has been notably sensitive about suggestions his are tiny.)

Of the full set of NFTs, 44,000 were available for purchase, which presumably means Trump kept 1,000 for himself. That leaves $4.35 million pumped directly into Trump’s coffers (or at least those of the LLC licensing his name)—plus a 10 percent resale royalty for any secondary market sales.

“It’s another cheesy grift, him trying to monetize his hardcore supporters,” CNN senior political analyst John Avlon said on . “It shows how fundamentally unseriously he’s taking this run for president.” 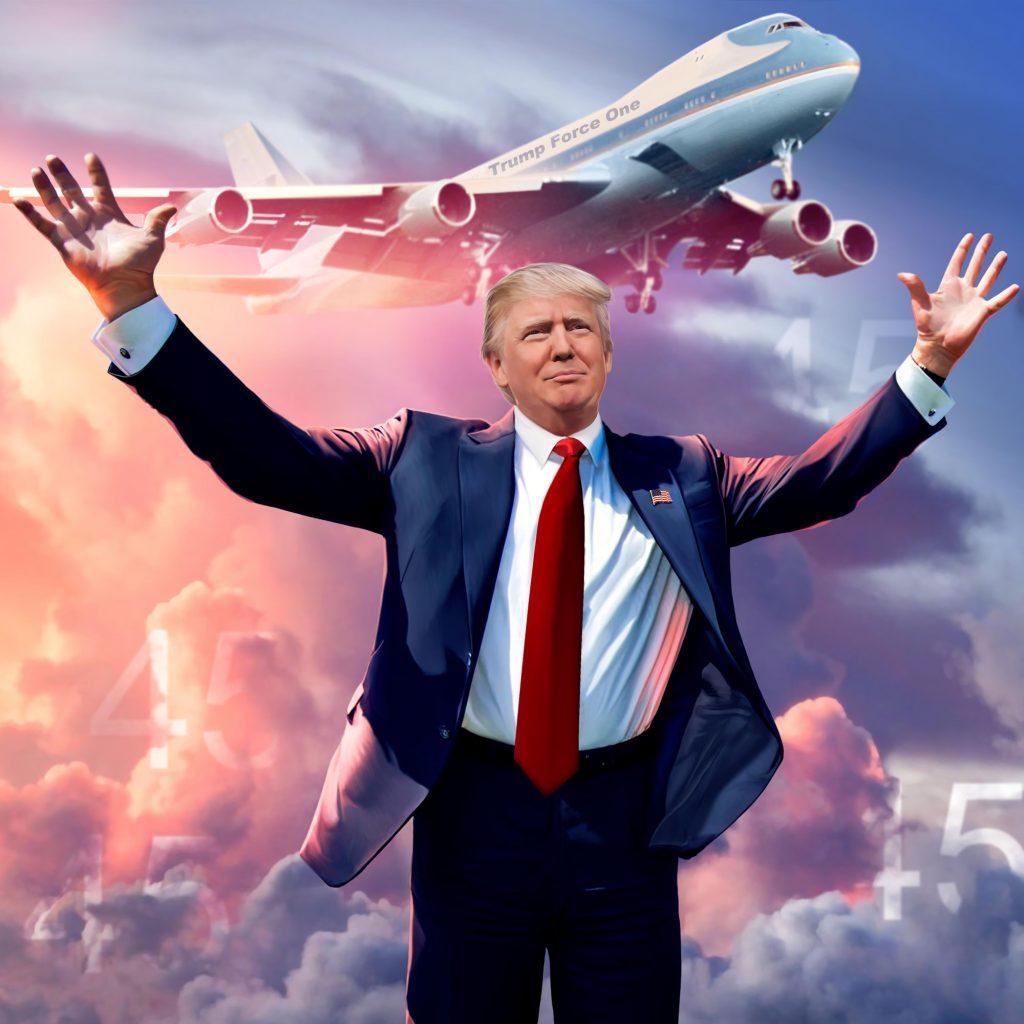 The buyers included 115 collectors who bought 45 NFTs each, guaranteeing themselves a seat at a Mar-a-Lago dinner with Trump, according to Dune Analytics. An additional 17 people purchased 100 NFTs, the maximum number allowed.

The current floor price for the collection is hovering around $310, or more than three times the original cost. At least one card from the series was listed for a resale price of one hundred trillion ETH, a number so large in dollars ($119,605,000,000,000,000) that I’m not sure there’s a word for it. 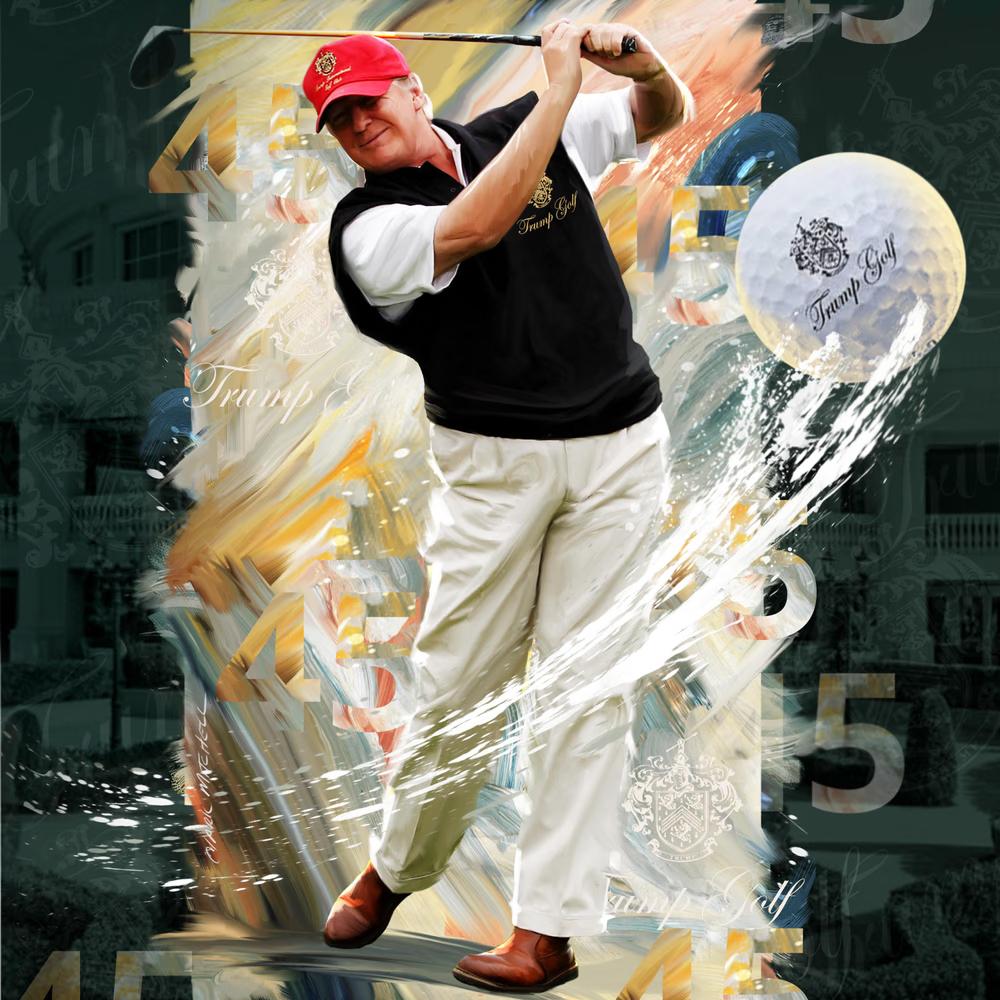 The card that has traded hands for the most money since the initial offering is one of the one-of-ones, an “autographed” image of Trump in a tuxedo. It went for a surprisingly hefty 37 ETH ($43,644.46).

Trump’s NFT drop comes amid what’s been dubbed crypto winter. And while his collection seems to have fared better than wife Melania Trump’s , which she was forced to buy herself due to lack of interest, the Trump Digital Trading Cards did not exactly light the world on fire.

One Twitter user pointed out that the collection failed to crack the top 10 on OpenSea, being outsold by something called “The Legend of Cockpunch.”

All day long, the floor price for the Trump NFT has been slipping on https://t.co/fK9xqhF1fA, and the collection failed to break into the site’s top 10, with something called (I swear!) “The Legend of Cockpunch” outselling it! pic.twitter.com/RJXFABSpvA

Among those who opted not to buy is artist Andres Serrano, who spent several years acquiring obscure Trump merchandise for an art installation documenting the real-estate magnate’s many bizarre business ventures.

“I stopped buying things for my Trump exhibition years ago,” Serrano told Artnet News. “True to form though, Trump doesn’t miss a beat or a hustle!”