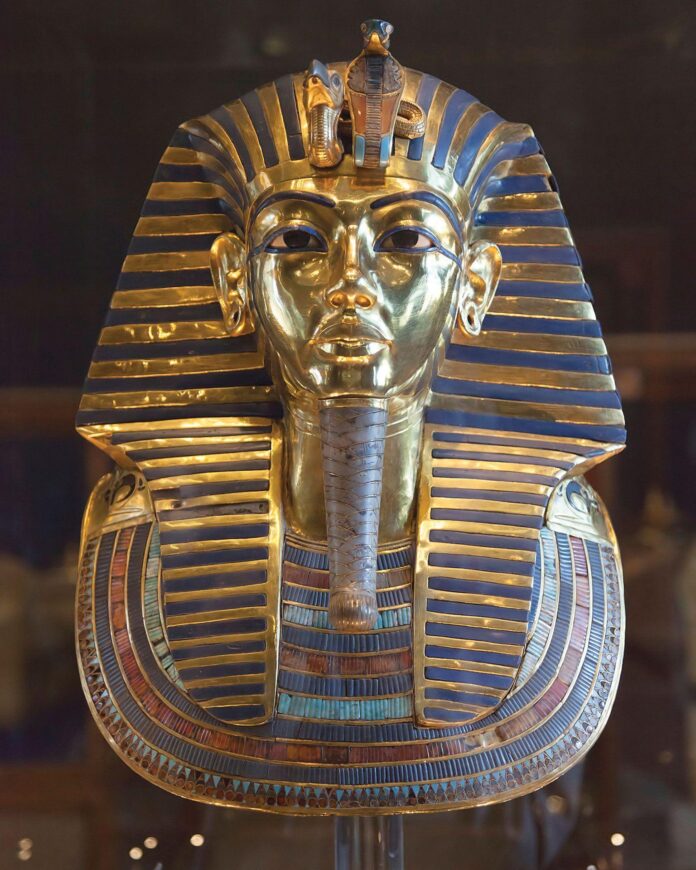 In the century since the discovery of Tutankhamun’s tomb in the Valley of the Kings in 1922, the pharaoh’s gold death mask has become a symbol of ancient Egypt, celebrated the world over as a masterpiece of ancient art. It has been seen by millions of people, either in Cairo or as part of travelling exhibitions, scrutinised and analysed, yet researchers continue to make new discoveries about its history. Here are four things you probably did not know about one of the world’s most recognisable artefacts.

The gold used to make Tutankhamun’s mask 3,300 years ago was brought to the palace workshop either from Egypt’s eastern desert or Nubia, the resource-rich region south of Egypt, which the pharaohs had integrated into their expansive empire. Toiling in the desert heat, workers ground up chunks of quartzite to free tiny fragments of gold, while others panned the sand. Once they’d gathered enough gold, it was moulded into ingots and sent to craftsmen to be beaten into shape. The lapis lazuli, used to form the mask’s eyebrows and the makeup surrounding the eyes, came from much further away: the mountains of Badakhshan in Afghanistan. To access the lapis lazuli, miners piled wood against the rock face and set fire to it. Then, they threw water over the wall, causing it to cool and crack, revealing the lapis lazuli. Once hacked free, these lumps entered the Near Eastern trade network, passing through Mesopotamia to eventually reach Egypt, often as a gift of the Babylonian king. Other precious stones were collected for the mask in the deserts either side of the Nile Valley, while its obsidian pupils may have come from Ethiopia.

Was it made for somebody else?

A recent analysis of the mask’s construction by the Egyptologist Nicholas Reeves suggests that its face section, representing an idealised portrait of the young Tutankhamun, replaced an earlier one. If this was the case, the mask originally belonged to someone else. The most likely candidate is King Neferneferuaten, who appears to have been Tutankhamun’s predecessor and may even have been the famous Queen Nefertiti ruling as king. A number of Neferneferuaten’s funerary goods were adapted for Tutankhamun’s use, suggesting that she was never buried with them. Intriguingly, one of the mask’s cartouches—the long ovals that contain two of a pharaoh’s five names—was changed to Tutankhamun from Neferneferuaten.

Although Egypt’s embalmers and priests treated royal mummies with the utmost care and respect, accidents still happened. One corner of the mask’s headdress reveals ancient damage. Reeves suggests that Tutankhamun’s mummy might have fallen over during the funerary ceremonies, perhaps when priests stood it upright for certain rituals. The discoverer of Tutankhamun’s tomb, the British archaeologist and Egyptologist Howard Carter, found pieces of gold straps, originally wrapped around the mummy, in the room and corridor outside the burial chamber, while the vulture at the top of the mask has mysteriously lost its eyes. Both oddities provide proof of the likelihood of an ancient accident.

During Tutankhamun’s funeral, priests poured such large amounts of resin over his mummy that when it solidified, the body, and the gold mask it wore, were left glued to the coffin. To free them, Carter resorted to drastic measures. First, he and his team dismembered Tutankhamun, making it easier for them to remove the pieces of the king’s body and reassemble them on a tray. But the gold mask—and Tutankhamun’s severed head within—remained in place. Carter used heated knives to melt the resin holding Tutankhamun’s head inside the mask, and later, hung the coffin upside down over paraffin lamps to free the mask itself. This melted the resin, but also loosened many of the mask’s inlays, causing them to fall out of place. Carter had to spend days putting them back in position.

Before Netflix, Warhol Tapped Into the Tragic Mythos of Marilyn Monroe—Here Are 3 Things You Might Not Know About His Iconic Works