Home News From a gruesome Old Master to a potential million-dollar superhero: our pick... 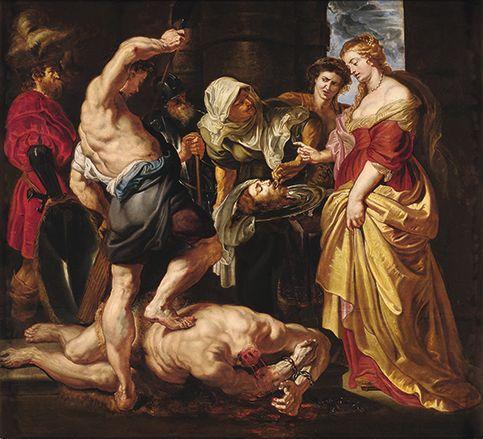 Peter Paul Rubens, The Head of Saint John the Baptist Presented to Salome (1609)

This large-scale painting made the then-record for Rubens after it was rediscovered in 1998 and sold the same year for $5.5m at Sotheby’s, New York. “Rubens’s depiction of the beheading of Saint John the Baptist, painted after his return to Antwerp, is a work in which the still-young artist fearlessly explores the violent and sexual dynamics of the Biblical narrative like some pre-cinematic Martin Scorsese,” says Keith Christiansen, a curator emeritus at the Metropolitan Museum of Art in New York, in a press release. The work is one of ten paintings coming to auction from the Fisch Davidson Collection, which has a total presale estimate of $40m to $60m and also includes works by Orazio Gentileschi, Guercino and Bernardo Cavallino. The collection was collated by the former real estate developer Mark Fisch and Rachel Davidson, who are getting divorced.

This pair of large-scale dynamic assemblages comes from the collection of the actress Jane Fonda, who tells The Art Newspaper: “Mr Dial made works of universal value, and the themes are timeless.” Works from Arthur Dial and Thornton Dial Jr accompany these works to the sale, also from the collection of Fonda, who sits on the board of the Souls Grown Deep Foundation and Community Partnership, an organisation dedicated to promoting the work of Black artists from the American South.“These works show the mid-career sophistication of Dial’s ever-evolving practice. Where the artist’s early paintings and constructions often incorporate bright colours and clear, representational imagery, these pieces reveal an embrace of darkness and abstraction,” says Cara Zimmerman, Christie’s head of Americana and Outsider Art. The wider sale has a total low presale estimate of $1m.

The panorama depicted on this vibrantly painted bowl depicts a “Hong”—an office owned by a western trader within China during the 17th and 18th centuries. Hong bowls offer insight into life in the warehouse buildings which were overseen by strict rules to ensure that the western traders did not reside in, or disturb, the nearby walled cities. “Very few Hong bowls have survived, and almost all are in public collections,” says Michael Hughes, the vice president and head of department for Chinese ceramics and works of art for Bonhams US. “This particular bowl is a fascinating time capsule for a brief moment in history from 1787-88. It depicts an overpainted US flag, after the US warehouse moved during the period the bowl was being enamelled.” The 155-lot sale comes from the Cohen & Cohen gallery, which closed a few years ago after 50 years of trading.

Estimate: not provided, but comparable editions have sold for around $1m

When the consignor bought this early copy for around $100 more than 40 years ago, it is unlikely they envisaged the attention that this lot would attract today, as one of the best-known copies of Spider-Man’s first appearance. “This Amazing Fantasy No. 15 is an exceptional copy of one of the most important books of the last 60 years. We’ve only sold four or five copies with a higher grade ever; one of this quality only comes along every three [or] four years,” says Ed Jaster, the senior vice-president of Heritage Auctions.

Exhibiting at London Art Fair by Koop Projects, 18 to 22 January

“Flip-flops on suede” may not be standard artist material but this work draws on an established tradition of African art of exploring discarded materials and found objects. This example, by the Ghanaian artist Patrick Tagoe-Turkson, draws on the term kayayei, used to describe female porters who carry items on their heads. “Patrick Tagoe-Turkson is an artist-activist. His innovative work is an urgent call for collective action on the problem of plastic pollution and exemplifies the ways in which African artists are redefining and reimagining problematic waste materials,” says Helen Rogers, the managing partner of Koop Projects, which is showing the work for the first time at the fair.