Home News From career suicide to cause for celebration: how the art world is... 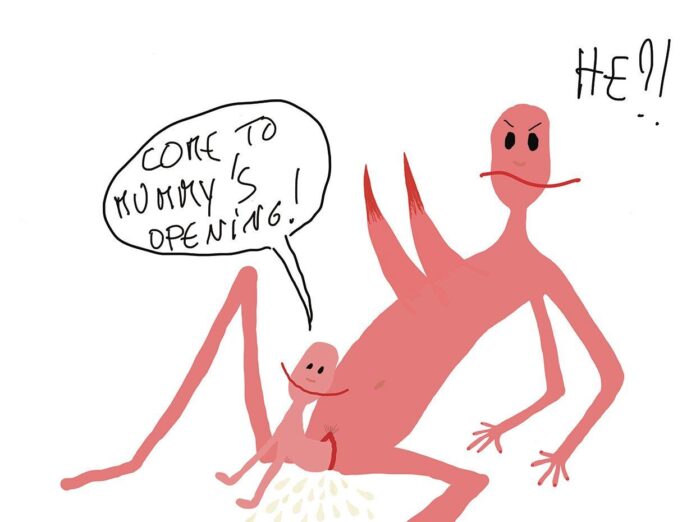 It was a welcome change to have women artists significantly outnumber men at this year’s Venice Biennale. But despite a gratifyingly stronger female presence across all institutional and commercial areas of the art world, there is still a long way to go before full gender parity is achieved in both gallery representation and market prices. Whether in the commercial or the institutional sectors, most art world power still abides with the male of the species. And this is a factor inextricably entwined with the treatment of mothers.

Madonnas and childs notwithstanding, a conspicuous characteristic of the art world continues to be its abiding disregard for motherhood, or parenthood in general. As any mother working in the art world can confirm, the sector’s attitude towards children is often more akin to that of King Herod. I remember as a new parent in the mid-1990s fighting battles with both a resistant Institute of Contemporary Arts (ICA) and the Tate Gallery to get baby changing facilities installed in these supposedly progressive institutions and can still recall the powerful frisson of disapproval when I turned up at private views with a baby strapped to my front.

You can now change a nappy at most galleries, but for artist and art worker parents alike Cyril Connolly’s 1930s quip that “there is no more sombre enemy of good art than the pram in the hall” has proved to be depressingly enduring. “The old cliché that one cannot be both an artist and a mother has proved remarkably durable,” says the art writer (and mother) Hettie Judah in her important new book How Not to Exclude Artist Mothers (and Other Parents). Over the last two years Judah interviewed 60 artists and her book lays bare the art world’s overarchingly family unfriendly culture of after-hours private views, rigid deadlines and relentless travel, as well as some chilling examples of discrimination in art schools, commercial galleries and institutions.

As Judah puts it, “unlike the world of salaried employment, the art world has no HR department”. But what her book also flags up is that small changes can have a momentous effect. “Many of the suggestions made by artist mothers simply read like requests for reasonable behaviour” she says. These include open and honest conversations about recourses, fees and timeframes; a willingness to be flexible; giving artist mothers a little extra time; not expecting round-the-clock availability; welcoming co-carers and not imposing last minute changes.

These and other effective measures have been condensed into a ten point checklist, How Not to Exclude Artist Parents: some Guidelines for Institutions and Residencies, which can be found online in 16 languages. For the wider art world Judah and Jo Harrison have now also launched the Art Working Parents Alliance which aims to coordinate with artworkers across the world and will be holding a seminar at the Whitechapel Gallery early next year to draw up further guidelines and form international networks of support and action.

But despite mother-artists still facing so many obstacles, Cyril Connolly’s adage is also being cheeringly refuted not only by the increasing prominence of critically acclaimed work by women in art fairs, exhibitions and biennales world wide, but also by the way in which motherhood itself is now featuring as a subject in its own right.

No longer is maternity only tackled by the intrepid few, such as the early pioneers Mary Kelly and Susan Hiller, both of whom received hostility from within the feminist movement itself for their now-celebrated works charting their pregnancy and post-partem experiences. Camille Henrot’s contribution to the 2021 Liverpool Biennale prominently featured paintings of maternity, lactation and a sculpture of a woman expressing milk with a breast pump. And Hettie Judah’s artist-mother contributors marked the launch of her book with a large and triumphant show optimistically titled Love, Celebration and the Road Ahead at TJ Boulting Gallery, which presented procreation in multifarious ways.

Other examples include the Marlene Dumas major retrospective on show until January 2023 at the Palazzo Grassi in Venice, which contains many paintings not only of,  but also made in collaboration with, her then-infant daughter. And Caroline Walker, one of the artists currently featured in the prestigious British Art Show, and who shows in Women Observed at K11 in Hong Kong (8 November to 12 February 2023), frequently includes every aspect of motherhood, from nappy changing to breast feeding, in her epically scaled paintings of the everyday experience of women.

So the times they are a changing, with motherhood at last becoming a cause for celebration rather than being perceived as career suicide. Here’s to the enduring presence of the pram in the hall!