Home News Hong Kong’s ‘Pillar of Shame’, a monument to the victims of Tiananmen... 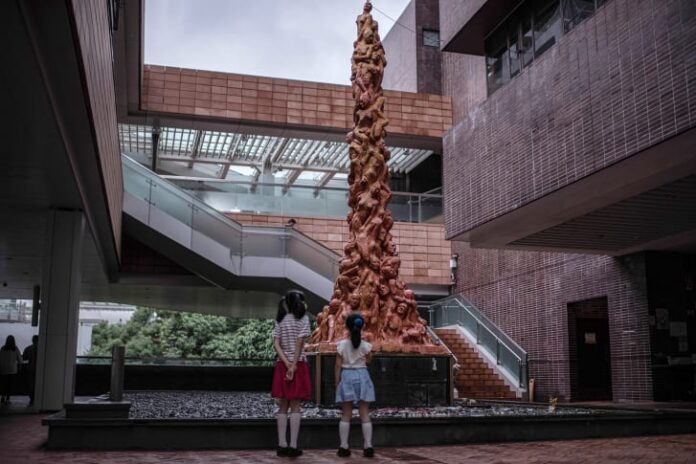 For more than 20 years the “Pillar of Shame” sculpture stood as a memorial to the victims of the 1989 Tiananmen Square massacre, in which the Chinese military crushed protests led by college students in Beijing with deadly force. Atop a podium in the University of Hong Kong’s (HKU) campus, the 26-foot-tall (8 meters) statue of contorted human torsos was one of the last iconic memorials to victims of the bloody crackdown remaining on Hong Kong soil.But around midnight on Thursday, yellow construction barriers were erected around the statue and the sounds of cracking and demolition were heard as the sculpture was removed under the cover of darkness. Images were taken during the removal process show workers wrapping the statue in protective film and lifting it out of the campus on a crane in two distinct parts. The HKU Council, the university’s governing body, said in a statement the sculpture will be held in storage.

A witness said Thursday morning the site of the sculpture is now empty and students have been seen crying on campus following the removal. CNN agreed to not disclose the name of this witness because the person feared retribution from authorities.

That fear of retribution is common among those who speak out against authorities in Hong Kong since Beijing imposed the National Security Law on the city in 2020, punishing offenses such as subversion and secession with sentences of up to life in prison.

The HKU Council said in a statement the removal “was based on external legal advice and risk assessment for the best interest of the university.” Hong Kong national security police investigate Tiananmen Square vigil organizers The sculpture, which stood in the Haking Wong Building of the university, was part of a series of works by Danish artist Jens Galschiøt created in 1997 — the year Hong Kong was returned to China after more than 150 years of British rule. The sculpture includes the inscription: “The old cannot kill the young forever,” and was built to serve “as a warning and a reminder to people of a shameful event which must never reoccur,” according to the description on Galschiøt’s website.

Galschiøt called the statue’s removal “a very hard attack against the free word in the world.”He told CNN that he hopes to bring the statue back to Denmark so he can reassemble it. His wish is to then bring it to Washington D.C., where he hopes to place it in front of the Chinese Embassy. There, it will serve as a message to Beijing that the massacre is remembered and spoken about, he said.

For three decades, Hong Kong has been the only place on Chinese-controlled soil where an annual mass vigil has been held to mark the events in and around Tiananmen Square on June 4, 1989. The clampdown remains one of the most tightly censored topics in mainland China, with discussions of it scrubbed from mass media. Chinese authorities have not released an official death toll, but estimates range from several hundred to thousands.

After the 1997 handover, the continuation of the vigil and similar memorials were seen as a litmus test for Hong Kong’s ongoing autonomy and democratic freedoms, as promised in its de facto constitution.

However, in the wake of national security law, scores of prominent pro-democracy politicians and activists have been jailed or fled the city, and numerous civil society groups have disbanded.

Attempts to commemorate the events of June 4 have also been adversely impacted. The last two Tiananmen vigils have been banned by police, citing coronavirus restrictions. Prominent activists, including Joshua Wong and media tycoon Jimmy Lai, were later jailed for participating in an unauthorized public commemoration in 2020.

The Chinese University of Hong Kong took down a “Goddess of Democracy” statue, stating it never authorized the display in the first place. The original figure was built out of papier-mâché by student protesters at Tiananmen Square in May 1989. A bronze replica was created by China-born New Zealand artist Chen Weiming and brought to the CUHK campus in 2010. Lingnan University similarly removed a relief by the same artist, saying it “may pose legal and safety risks to the University community.”

Following the news that the HKU “Pillar of Shame” sculpture was being dismantled, the artist Galschiøt wrote on his Twitter account, “I’m totally shocked that Hong Kong University is currently destroying the pillar of shame. It is completely unreasonable and self-immolation against private property in Hong Kong.”

“We encourage everyone to go out to Hong Kong University and document everything that happens with the sculpture,” he added in a statement.

In its statement, HKU Council said, “No party has ever obtained any approval from the University to display the statue on campus, and the University has the right to take appropriate actions to handle it at any time.”

It added the university “is also very concerned about the potential safety issues resulting from the fragile statue. Latest legal advice given to the University cautioned that the continued display of the statue would pose legal risks to the University based on the Crimes Ordinance enacted under the Hong Kong colonial government.”Efforts to preserve the memory of the sculpture are already underway, with art-activist group Lady Liberty Hong Kong creating a 3-D model made using more than 900 photos.”The idea is that everyone can print a copy it and place it wherever they want,” said Alex Lee, the founder of the group. “In the digital age, there’s no limitation of what you can do with virtual or physical objects — (the hope is) for everyone to try to preserve this symbol.”

According to Lee, the statue represented something of the fundamental difference between Hong Kong and mainland China. “It (the statue) symbolized that Hong Kong still has room for the freedom of speech and it really means that Hong Kong is still a different part from China,” said Lee. “But then I think right now, that last really small space is gone.”On Sunday, Hong Kong’s first “China patriots only” legislative election witnessed a record low turnout, reflecting a steep decline in civic and political engagement following Beijing’s overhaul of the city’s electoral processes earlier this year.

Following the vote, Hong Kong Chief Executive Carrie Lam traveled to Beijing and met with Chinese Leader Xi Jinping, who endorsed her administration and praised her for moving the city “from chaos to order,” according to a government statement of the meeting.

Calling the election — in which turnout was just 30.2% — a “success” Xi said the city had “made solid progress in promoting democratic development that suits Hong Kong’s reality.”

“The democratic right of Hong Kong compatriots has been shown,” Xi said. A number of Hong Kong activists who fled abroad labeled the election — in which prospective candidates were first screened by the government — as a “sham,” a criticism echoed by many rights groups and international observers.