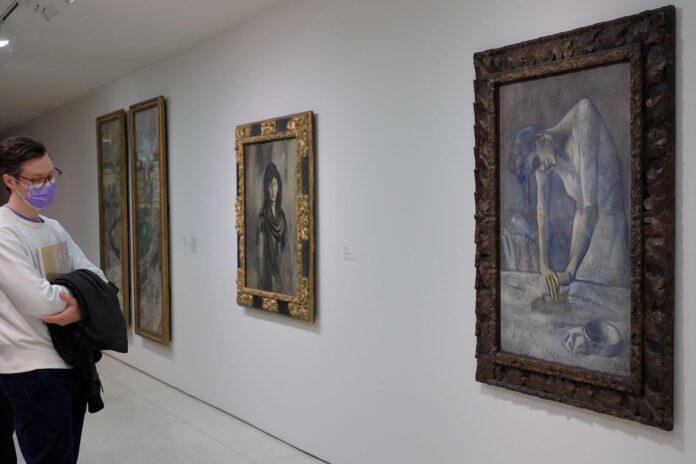 The heirs of Karl and Rosi Adler, Jewish art collectors who fled Germany in 1938 to escape Nazi persecution, are seeking the return of Pablo Picasso’s Blue Period painting Woman Ironing (La repasseuse) (1904), which they claim in a lawsuit filed last week is “in the wrongful possession” of the Solomon R. Guggenheim Foundation. In their claim, the eight Adler descendants (citizens of Argentina and the United States) call for the painting’s return or compensation commensurate with its current market value of between $100m and $200m.

Karl Adler had been, before the rise of the Nazi regime and systematic dispossession and persecution of German Jews, the chairman of the board of a leather goods manufacturing company in Baden-Baden. As the situation for German Jews worsened and the Adlers were stripped of their wealth and rights, they were forced to sell whatever they could to obtain cash and, according to the lawsuit, sold Woman Ironing (La repasseuse) to the dealer Justin K. Thannhauser for SFr 6,887 (about $1,552) in October 1938.

The following spring, according to the complaint, Thannhauser loaned the painting to the Stedelijk Museum in Amsterdam, which insured it for $20,000. In summer 1939 it went on view at the Museum of Modern Art in New York, which insured it for $25,000. The painting remained in Thannhauser’s personal collection and, upon his death in 1976, was gifted to the Guggenheim.

The Adlers eventually secured safe passage to Argentina, where many of their descendants live today, while others are based in California and Texas. One of their great-grandchildren, Thomas Bennigson, a lawyer based in Oakland, California, began researching the provenance of Woman Ironing (La repasseuse) with law firm Rowland & Associates in 2014. The firm was in repeated contact with the Guggenheim between 2017 and 2021, according to the complaint, and ultimately demanded its return on behalf of the Adler heirs in June 2021. The plaintiffs assert that their action falls within the bounds defined by the Holocaust Expropriated Art Recovery (Hear) Act of 2016, which allows claimants in Nazi loot cases to seek recovery of works within six years of becoming aware that they have a claim to the work.

In a statement, a spokesperson for the Guggenheim says the foundation “has conducted expansive research and a detailed inquiry in response to this claim, engaged in dialogue with claimants’ counsel over the course of several years, and believes the claim to be without merit”. The spokesperson’s statement adds that the painting was not “stolen or seized by Nazi authorities”, but rather sold by one Jewish businessman to another “when both men and the painting were outside of Nazi Germany”.

The foundation also claims that its original provenance research into the painting following Thannhauser’s bequest included contacting Eric Adler, Karl and Rosi’s son. “Eric Adler responded to the Guggenheim’s outreach in writing,” the statement says, “confirmed the dates of his father’s ownership, and did not raise any concerns about the painting or its sale to Justin Thannhauser.” The foundation asserts that, based on its research, neither Karl Adler nor any of his children “ever viewed the sale as unfair or considered Thannhauser a bad-faith actor”, adding that “the Guggenheim believes the outcome of the present court action will confirm that it is the rightful owner of Woman Ironing”.

The painting figures prominently in Thannhauser Collection, a long-term exhibition at the Guggenheim Museum in New York featuring works gifted by Thannhauser.

This is not the first time Bennigson has sought the return of or compensation for a Picasso painting that once belonged to his relatives. In 2005 he settled a lawsuit he had brought against Chicago collector Marilynn Alsdorf over the painting Femme en Blanc (1922), with Alsdorf paying him $6.5m to retain title to the painting. In lawsuits against Alsdorf and dealer David Tunkl, Bennigson asserted that the painting had belonged to his grandmother, Carlota Landsberg (née Adler), who had sent it to a dealer in Paris in 1933 as she was fleeing Berlin, but that it was ultimately seized by the Nazis in 1940.