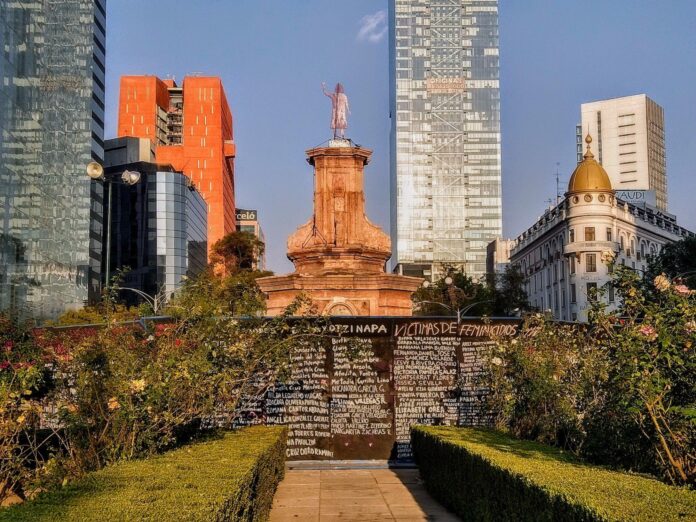 Less than a year after it was erected atop a plinth formerly occupied by a statue of Christopher Columbus on Mexico City’s central Avenida Paseo de la Reforma, a guerrilla “anti-monument” to victims of violence against women and girls may be removed under a plan proposed by the city’s mayor, Claudia Sheinbaum.

At a 7 August press conference, the mayor announced plans to relocate the popular figure—an outline of a female figure in purple with a raised fist and the word “justicia” etched into its support structure—and protest signage surrounding it from the traffic island (which has been unofficially renamed Glorieta de las mujeres que luchan, or Roundabout of the Women Who Fight) to an unspecified location elsewhere in the city. The empty plinth will then host a replica of The Young Woman of Amajac, a 15th or 16th century limestone statue of an indigenous woman discovered last year in Veracruz and now housed at the National Museum of Anthropology in Mexico City.

The mayor claimed that the relocation and replacement plan had been arrived at in consultation with “several groups of indigenous women” from around the country. But, according to members of Antimonumenta Viva Nos Queremos, the group that put up the monument against gender violence, they were not consulted on the city’s plan.

“Replacing the anti-monument with the Amajac statue is the government’s way of fulfilling a political quota,” a member of Antimonumenta named Marcela told Courthouse News. “They speak of indigenous women, of inclusion, they have a political agenda they must stick to, but there’s no real inclusion.”

Under a previous plan, announced in September 2021, the Columbus statue was to be replaced by a newly commissioned sculpture by Pedro Reyes of a monumental head of a woman, inspired by statues of the Mesoamerican Olmec civilisation. That project provoked fierce opposition and was abandoned a month later, at which time Sheinbaum announced plans for the Young Woman of Amajac replica to be placed on the plinth. In the interim, the feminist anti-monument has been erected on the spot.

Paseo de la Reforma’s Columbus statue is one of the most prominent to have been taken down amid the global reckoning with the racist and colonial legacies of figures commemorated in public statuary that has occurred in recent years. It had occupied its plinth since 1877.