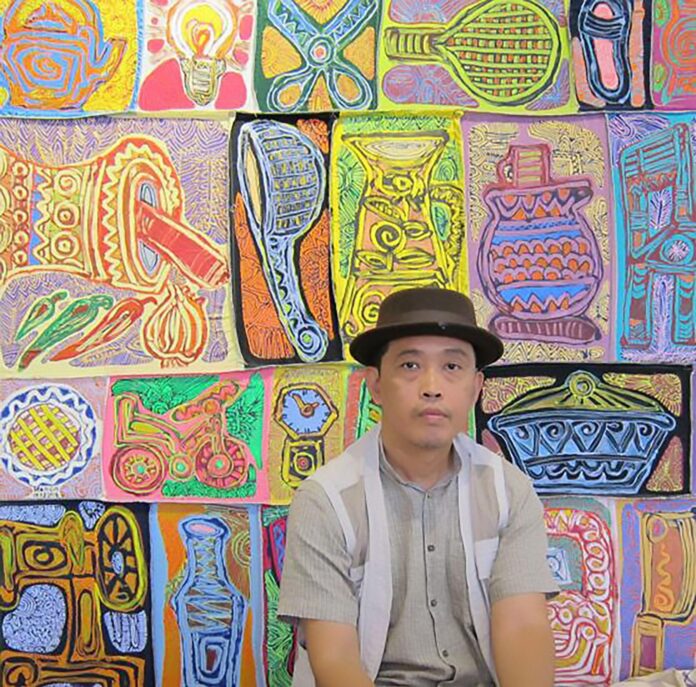 The outspoken Myanmar artist Htein Lin and his wife Vicky Bowman, a British national who served as the UK ambassador to Burma from 2002 to 2006, have been detained by the country’s military government. The couple were arrested yesterday on charges of violating immigration law, Reuters first reported, and are being sent to Yangon’s notorious Insein Prison. Bowman, currently the director of Myanmar Centre for Responsible Business, and Htein Lin have a 14-year-old daughter, who is reportedly safe.

Speaking to The Art Newspaper just two weeks ago, Htein Lin said: “No one who lives in Myanmar today feels safe. Life is very fragile, whoever you are.”

His words were in response to the junta’s execution of four pro-democracy leaders, announced on 25 July, which shocked the country’s already embattled art community. Htein Lin—who was previously imprisoned from 1998 to 2004 under earlier iterations of military rule—said of the hip-hop musician turned politician Phyo Zeya Thaw and Ko Jimmy that were “two of the four who were executed” along with Hla Myo Aung and Aung Thura Zaw that they were friends. “They were also fellow artists—musicians, painters, poets. Words can’t express how we feel now that they are gone.”

The execution of popular opposition figures escalates the violent suppression by the Tatmadaw military leadership, headed by Min Aung Hlaing. As of 17 August, the junta has killed at least 2,215 people in skirmishes with protesters and rebels since seizing power from Aung San Suu Kyi’s elected government on 1 February 2021, according to the Assistance Association for Political Prisoners (Burma).

While many Myanmar artists have fled the country; others have remained despite the immense risk. Survival necessitates self-censorship, with detention or worse a constant threat. Htein Lin identified poets Maung Yu Paing and Maung Thar Cho, filmmaker Min Htin Ko Ko Gyi, and writer Than Myint Aung as among the currently detained. The internationally renowned performance and installation artist Moe Satt spent 95 days in Insein for joining a protest in March 2021.

Exhibiting art in Myanmar has been challenging, though a few spaces, including Myanm/art, have reopened. Bank transfers remain restricted, and shipping art abroad is difficult, as the funds from sales might support the resistance, Htein Lin told The Art Newspaper. “Visual artists still working in Myanmar are looking more to the local market,” he said, and attracting local buyers interested in tangible assets as the Myanmar kyat devalues.

Art is a “safe” investment because “the police and military won’t confiscate your canvases at a checkpoint, but they will seize your cash. Although burglary and crime are on the rise, thieves don’t steal paintings,” Htein Lin said. “There is a growing secondary market for Myanmar art inside the country, particularly for dead artists. We lost a lot of older artists in the last year, mainly due to Covid, including painters like Tin Maung Oo, Ko Aw, Ba Htay Gyi, San Minn and Nyein Chan Su,” he added.

Myanmar’s contemporary art scene flourished after the country’s hard-earned democratisation in 2015, building on the underground cultural struggles of the previous decades, and was beginning to connect with regional and global networks. But it has not yet consolidated beyond what the Yangon-based artist and curator Aung Myat Htay calls “unmodified old-school”, with an art infrastructure that has “not changed much since its creation more than 60 years ago after independence [from Britain in 1948]”.

The Burma Art Club first brought Western art to Myanmar in the 1910s, and sent artists for education in the West. Successive military regimes have weaponised art as propaganda, Aung Myat Htay says, creating some of the worst art censorship in the world. Crucially, Aung Myat Htay’s online School of Contemporary Art (SoCA) provides artists with training and opportunities.

“We do not see any of the intentional political expression that we used to,” says Aung Myat Htay. “Under the current situation, there exists such a feeling that we cannot make a sound at all, and this may be due to the dangerous atmosphere for sure.”

Myanmar’s artists are, however, finding artistic freedom and support abroad, from gallery shows around Asia to a major survey at the British Museum in London scheduled for autumn 2023. “There has, in recent decades, been growing interest in contemporary art from Myanmar,” says Louis H. Ho, an independent curator in Singapore.

Ho says: “The recent tenth edition of the Asia Pacific Triennial [4 December 2021 to 25 April] featured the Myanmar performance collective 3AM, while past editions have included Htein Lin and Soe Yu Nwe. Min Thein Sung was in the line-up of the sixth edition of the Singapore Biennale in 2019.” Htein Lin’s soap carvings, made during imprisonment, were a highlight of the 2016 Singapore Biennale which Ho co-curated.

“Private galleries across the region have also proved to be important allies, such as RKFA and Intersections Gallery in Singapore, 10 Chancery Lane in Hong Kong, and Thavibu Art Advisory in Bangkok,” Ho adds. Hong Kong’s Karin Weber Gallery has presented several Myanmar projects, most recently a solo show of Aung Myint who co-founded Inya Art Gallery in 1989, one of Myanmar’s first contemporary art spaces (a military crackdown on student protesters in 1988 was a watershed moment).

Htein Lin remained somewhat hopeful when speaking to The Art Newspaper two weeks ago. “I hope that the rest of the world will help Myanmar artists to develop their practice and stay connected with us,” he said, calling for young artists particularly to be considered for exhibitions and residencies. In the long term, he said, “we always hope that the situation in Myanmar will get better. We have no choice, since otherwise we will be destroyed by despair.”