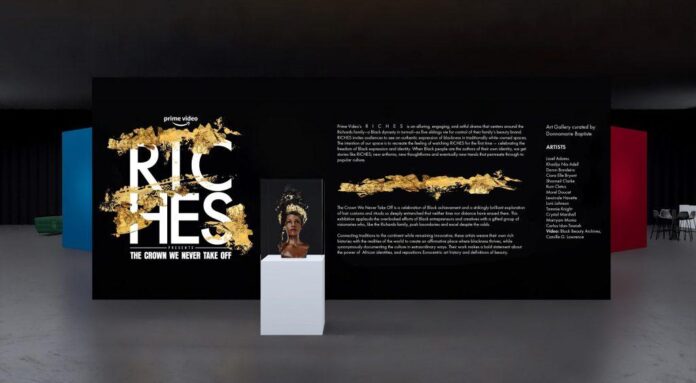 Prime Video is seizing on Miami Art Week to promote its new series with a show of work by 15 African artists at Wynwood’s Spring Studios.

Organized by former Art Basel events manager Donnamarie Baptise, the brand activation, titled “The Crown We Never Take Off,” celebrates Prime’s latest original series which starts streaming December 2. It’s free and open to the public from 12 to 9 p.m. December 2 and 3.

recounts a fictional Nigerian-owned beauty company called Flair and Glory in the wake of the death of its founder, Stephen Richards, shocking his second wife (played by Sarah Niles from ) when he leaves the company to his estranged children in America.

BlackHouse Events approached Baptiste to translate into an exhibition. To prepare, Baptiste previewed rough cuts from the series’s first season. Its premise alone inspired her. Although Black Americans spend $6.6 billion on beauty and represent 11.1 percent of the national market, she told Artnet News, ownership isn’t proportionate.

“What really made me tie the art into the space was that, here’s this black family who, against all odds, became incredibly successful and wealthy,” she said. “Those of us that work on the ground, we know that [art is] something we just love and need in our lives. But for a large group of the population, it’s an asset class.”

“It’s about connecting the achievements of creatives of color, of the Black diaspora, and tying that to the achievements of the new creatives in the show,” Baptiste said of her vision. “It was really important that we kept Africa, the continent, as the focus.” The artists she chose hail from Cameroon and Ghana, but also the U.S. and the Caribbean.

Camille Lawrence of the Black Beauty Archives completed a video commission to anchor the exhibition, which places emerging artists alongside established talents who already planned to show at the festivities—like Miami-based sculptor Morel Doucet, who appeared in this fall’s Christie’s sale in partnership with Galerie Myrtis.

Baptiste already knew Tanzanian-Nigerian collage artist Marryam Noma, who produced a new series of five works cut specifically for the show. Baptiste also owns work by Kum Cletus, so she contacted his gallery, an upstart, Black-owned outfit called FC Collective in Atlanta, which consulted on the curation, too.

“There is going to be quite a bit of photography in the show, because there’s such beautiful photography coming out of Africa,” Baptiste added. Ghana-based Carlos Idun-Tawiah, who is participating in the show, has made a name channeling that inspiration for glossy pages.

Disparate art worlds thrive from South Beach to Wynwood this first week of December, even if they don’t quite collide. “This is not a show for the fine art crowd,” Baptiste said, “but I think with the quality of artists that we have, we will attract some of that audience.”

It’s more about capturing foot traffic, and capitalizing on the week-long block party to come, blurring the boundary between art and pop culture with busts of the characters and professional photo ops themed around the show.

Artists will be on site, as will some of the show’s stars. Art performances and sets by diasporic DJs are scheduled throughout the activation’s run.

“Artists, particularly from Africa, have been overlooked,” Baptiste said, “or they’ve been put into a category of African art, when really, they’re making contemporary art.” She hopes “The Crown We Never Take Off” inspires attendees to explore art from new perspectives—especially Africa’s diverse cultures.

“It’s possible for you to be African and be something else,” she said. “Your work can still speak to the general contemporary art world without being placed into a box.”

All that’ll be missing in the show itself. Selections will stream at “The Crown We Never Take Off,” but you’ll need a Prime Video membership to enjoy in all its splendor.