Home News Protestors took too much risk throwing soup on the Sunflowers—and missed an... 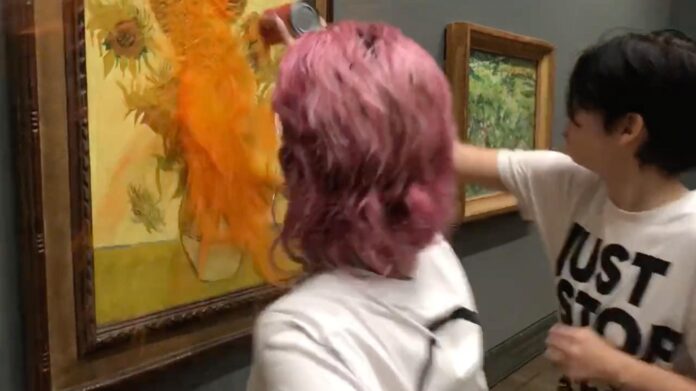 Do you worry about nuclear war? I do. We’re all pretending it can’t happen. But we’re nearer to a nuclear exchange than we have been for more than 50 years. I did a PhD on the last time a major conflict on Russia’s south-western borders did not trigger a wider European war—all the way back in 1878. Usually, there is war. Bellicose politicians get carried away and before you know it, it’s too late.

Let’s pretend you share my concerns, and wanted to protest for peace. But an effective protest needs attention, something outrageous. What to do? How about we go to the National Gallery and attack a famous painting. After all, what’s the point of art if the world is about to end?

Enough. It’s true the protesters who threw soup at Van Gogh’s Sunflowers caused no damage to the painting. Yet when I saw the video, tins projected within millimetres of the glass, I couldn’t help shuddering. A glazed painting, even in a museum, is not impervious to damage. One slip, perhaps a scuffle with a bystander, and the glass could have cracked, or been pushed back against the canvas. Anyone who’s ever tried to wash Heinz tomato soup out of their kids’ clothes can imagine those sunflowers assuming an orangey hue forever.

The same protesters, Just Stop Oil, previously targeted another National Gallery picture, Constable’s The Hay Wain. They covered it (or rather, the glass) with a poster reimagining the scene affected by climate change. It was a clever idea and posed no threat to the painting. But to top that they had to do something more shocking and took, in my view, too much risk with the Sunflowers. So I can’t accept the end justified the means. As for “it’s just a painting”, I’m afraid that’s as ridiculous as, “it’s just the weather”.

Had they thought about it more deeply, the protesters could have gained something more than attention. Museums use too much energy. The National Gallery, in a normal year, emits about 5,300 tonnes of CO2e (a standard unit for counting greenhouse gas emissions). Tate’s emissions are about double that. It is estimated the British Museum’s NFT sales are responsible for almost a thousand tonnes of CO2. An average UK home emits about 2.6 tonnes CO2e from energy use annually.

The National Gallery says “a high proportion of our carbon footprint is associated with the energy required to maintain environmental conditions within the galleries”. These conditions are exacting; temperature between 21°C and 23°C, variable by 1°C, and relative humidity at 55%, variable by 5%. Not all institutions adhere to such conditions, but the standard (to qualify for Government Indemnity) is not much less demanding, and usually requires air-conditioning to run 24 hours a day, 365 days a year. It’s why major museums have energy bills in the millions.

Is this sustainable, environmentally? I’m sure Just Stop Oil would say no, and I’d agree. Is it sustainable financially? The National Galleries of Scotland recently closed their Modern Two gallery over winter due to energy costs. There will surely be others. Overly strict conditions also help explain why loan exhibitions have become so expensive.

But are they really necessary? The museum groups that set these standards forget that Old Master paintings have spent most of their lives hanging cheerfully in conditions not much better than a cave. Hang it on a dry wall and a Van Gogh will last for hundreds of years. As long as you don’t throw soup at it. Or start a nuclear war.

Art Industry News: As a Student, Boris Johnson Was Passionate About Returning the Parthenon Marbles to Greece + Other Stories