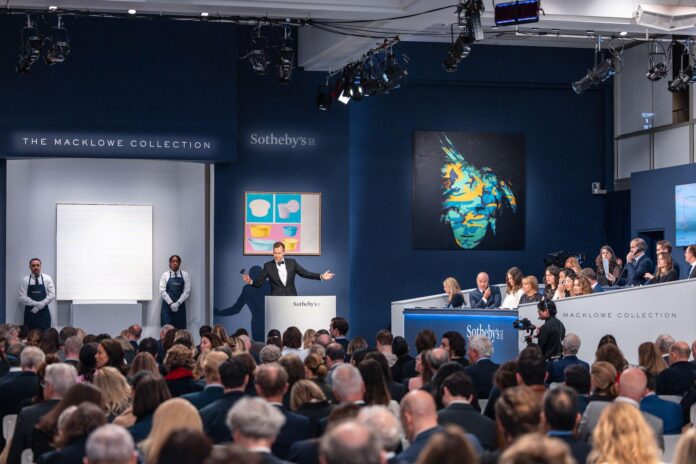 It was the year global inflation spiked, stocks plummeted, the energy crisis hit a boiling point and the crypto market withered. But, despite all this, Sotheby’s today reports that 2022 is on track to be the company’s most successful year ever, with sales due to reach $8bn. But, all is not as it seems.

Marketing is auction houses’ strong suit, and, for the first time, Sotheby’s has combined its real estate and classic car auctions with its fine art and luxury sales. The latter racked up $6.4bn, with fine art alone accounting for $5.7bn of that total, down 25% on the $7.3bn achieved last year and a little above the $5bn made in the pandemic year of 2020.

In a statement, Sotheby’s chief executive Charles F. Stewart says a “flight to quality” this year—which often happens during financial downturns—led to a “demand for blue-chip masterpieces—be they in established or new categories such as classic cars or collectibles”.

In the fine art arena, single-owner collections are a rich source of such blue-chip material and these sales contributed more than $800m to Sotheby’s bottom line. Back in May, the second tranche of the Macklowe collection brought in $208.7m or $246.1m with buyer’s premium. The entire sale was guaranteed, with two thirds of lots (19 of 30) secured by third-party backers.

Sotheby’s declined to comment on the number of guarantees and irrevocable bids issued this year; as a private company, it does not have to disclose this or its profits. But such financial instruments, which can often mask the real health of the market, have become more commonplace among the big auction houses, particularly when it comes to winning valuable single-owner collections.

Nonetheless, two other collections—those of the late Hong Kong-born businessman and philanthropist Joseph Hotung (which made $119.2m with fees) and the former Whitney president David Solinger (which fetched $137.7m with fees)—were guarantee-free.

Blue-chip Impressionist and modern masters including Magritte, Picasso and Monet racked up a chunky $1.2bn, the category’s highest total since 2015; while contemporary auctions totalled $1.8bn, second only to 2021.

Seeming to follow the money—according to Sotheby’s, collectors in Asia are spending 20% more per person than collectors from elsewhere in the world—the firm has today (14 December) announced plans to open a new 24,000 sq. ft location complete with exhibition spaces, in the Landmark Chater mall in the heart of Hong Kong in 2024.

The announcement comes as Hong Kong yesterday lifted its “0+3” medical surveillance period for tourists, a likely relief for the organisers of Art Basel in Hong Kong, though visitors will still need to take a PCR test on arrival in the special autonomous region.

Sotheby’s also plans to open premises in Shanghai next year. Sales totalled $1.1bn in Asia in 2022.

Plans to expand in France, meanwhile, appear to have been delayed. A spokesperson says the firm may not now move to its new Paris headquarters, at the site of the recently closed Galerie Bernheim Jeune, until 2024 due to construction work. Nonetheless, Sotheby’s reports Paris as having “its strongest year ever”, probably picking up some of the slack from a London market still trying to regain its footing as Europe’s preeminent art trade capital after Brexit. Even here, sales were robust, with London auctions totalling $1.4bn, their highest levels since 2018.

This year also saw Sotheby’s consolidate its primary market dealings with the launch of Artist’s Choice, which sells works directly from artists’ studios, as well as doubling down on digital offerings, particularly on social media. For the first time, marquee week auctions were streamed live on Instagram, contributing to a 25% leap in social media engagement. An astonishing 91% of the house’s auction bids were placed online in 2022.

Looking ahead to next year, consolidation looks set to continue across Sotheby’s as categories and sales bleed into one another.

As Stewart puts it: “Our focus next year remains on bringing to market exceptional works of art and most in-demand luxury objects as we innovate, broaden our range of offerings, and grow our audience through vastly expanded digital reach and engagement.”

Sotheby’s rival Christie’s is due to post its end of year results next week.