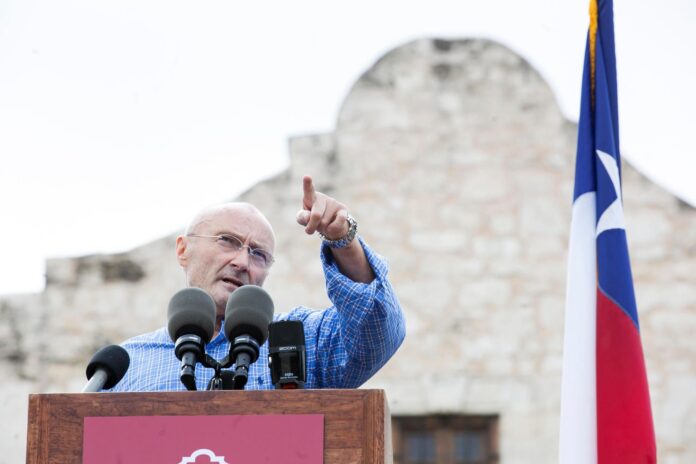 A defamation lawsuit brought by two experts in the history of the Battle of the Alamo claims that the authors of the book Forget the Alamo: The Rise and Fall of an American Myth dragged their names through the mud by implying fraudulent authentications, phony inscriptions and bloated prices. One purported victim of the alleged fraud is Phil Collins, the British rock drummer and singer/songwriter who once fronted the band Genesis.

The story begins with antiquities dealer Alexander McDuffie and historian and artist Joseph Musso, who were working to authenticate possible artefacts from the battle that would go on display following a proposed redevelopment of the Alamo site in San Antonio, Texas. According to the complaint, “plans included a visitor center which would house a collection of artefacts assembled by musician Phil Collins, who had become an avid collector of Alamo memorabilia and even financed a dig for historical artifacts under a building around the corner from the Alamo.”

In the late 2010s Chris Tomlinson, a columnist for the Houston Chronicle and San Antonio Express News, along with Vanity Fair correspondent Bryan Burrough and Jason Stanford planned to co-author Forget the Alamo, with Tomlinson taking a lead role in researching a chapter about the planned redevelopment. While reporting on the chapter, Tomlinson approached McDuffie for information about a planned museum, the new visitors centre and the trade of authenticating and selling antiquities.

Before the book was published an excerpt appeared in Texas Monthly (also a named defendant in the suit, along with the publisher of the book, Penguin Random House). The article implied that McDuffie and Musso assembled bogus artefacts for the museum and may have sold fraudulently authenticated artefacts to Collins for his collection, which the musician planned to donate to the new visitor centre.

McDuffie contacted Texas Monthly editor Dan Goodgame after the excerpt was published claiming that the article was full of “misrepresentations and misquotes” and asked that corrections or retractions be made. According to the complaint, Goodgame compiled a list of corrections to be published along with the article, which was to be the magazine’s cover story, but McDuffie told him the list “did not even come close to erasing the impressions the article had created, nor did they correct all of the factual errors.”

The book was published on 8 June 2021 and a paperback edition followed on 7 June 2022, one day before the lawsuit was filed. Both McDuffie and Musso say the article and subsequent book destroyed their reputations, with McDuffie’s business taking a crushing blow. Alex McDuffie Antiques brought in around $150,000 in annual sales before the article and book were published. After publication that number dropped to $9,800, which forced McDuffie to drop his prices and forgo any profits from sales, and the proposed redevelopment of the site was put on hold, costing him the position of founding historian and curator of the planned Battle for Texas museum.

According to the Alamo’s website Phil Collins donated his “priceless collection of Alamo and Texana artifacts”, which consists of hundreds of items, to the Alamo’s guardian the Texas General Land Office. Collins’s passion for the Alamo began after seeing the Disney film of Davy Crockett, King of the Wild Frontier. “When other children were out playing cops and robbers or other childhood games, Collins says that he was re-enacting the Battle of the Alamo,” the website reads.

Prior to the pandemic, the Alamo was the most-visited landmark in Texas, with 1.6 million visitors every year.