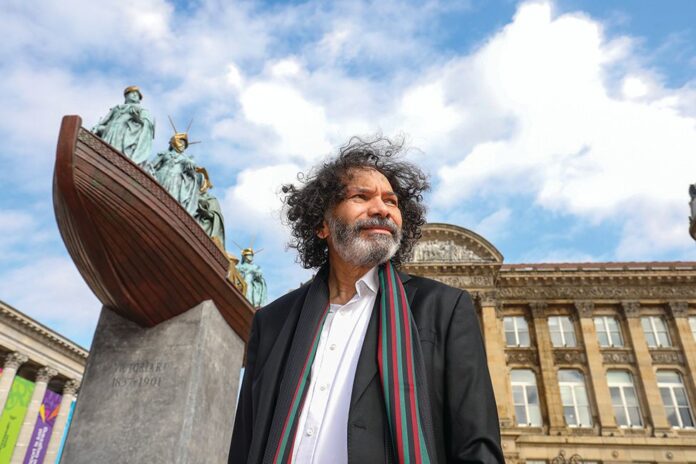 As Birmingham gears up to host the 2022 Commonwealth Games this summer (28 July-8 August), a number of artists have been casting a beady eye over the vexed colonial background to this international multi-sport event involving 72 nations and territories. The Commonwealth Games may now be known as the “Friendly Games”, but they began life as a tool of British imperialism, devised as “a means of increasing goodwill and understanding of the British Empire”.

The most conspicuous artistic response to Birmingham’s complicated imperial legacy can be found in the city centre, where in Victoria Square Hew Locke has dramatically reconfigured the monumental statue of Queen Victoria, that icon of imperialism. “I’m completely fascinated by her,” says Locke, who grew up in the former British colony of Guyana and passed a sculpture of Queen Victoria every day on his way to school, where his childhood notebooks were also emblazoned with her likeness.

Locke has been interrogating contentious monuments for decades. Well before the 2020 toppling of the statue of Bristol slave trader Edward Colston, Locke doctored a photograph of the Colston statue as part of his Restoration series in 2006, so that it was engulfed in a smothering cascade of gaudy decorations and jewellery, including skulls, coins and slave ships. But only now in Birmingham has he at last been able to intervene directly—albeit temporarily—in a real work, rather than present what he calls “impossible proposals”.

From now until the Commonwealth Games are over, Victoria Square’s stately bronze namesake sports a gladiatorial Britannia-like gold helmet-mask. She has also been placed inside a crate within a giant boat that has come to rest around her lofty plinth. Accompanying Queen Vic are five smaller clones of her, each cast in resin from the original statue but with the appearance of patinated bronze. The work is called Foreign Exchange, and Locke says he has placed the monarch in a crate and a boat “as if she is about to be shipped off, like so many of these Victoria statues which were sent all round the world”.

In addition, each one of this elaborately helmeted queenly crew also carries an oversized colonial medal signifying an important battle in the history of the British Empire, from the Second Afghan War to the Battle of Seringapatam in India and the invasion of Trinidad. But Locke, whose brilliant installation Procession is currently showing in the Duveen Galleries of Tate Britain in London, prefers mixed messages to tub-thumping polemic.

“Banging people over the head with a particular opinion doesn’t work,” he says, while admitting that his opinions are “confused and complex”. “I’m not a royalist but I’m not a republican either,” he says. “I’m trying to make something that’s beautiful and interesting to draw people in. If they want to go deeper then that’s fine, I want to start a conversation and be accessible to everyone regardless of their political background.”

Across town, Eastside Projects—in Birmingham’s Digbeth area—has mounted a multifarious programme of “anti-colonial” works to coincide with the games. It is not Queen Victoria but her dog that is the subject of Amy Ching-Yan Lam’s book and CGI animation, Looty Goes to Heaven. The work focuses on the small Pekingese dog taken by British troops from China at the end of the Second Opium War and gifted to Queen Victoria. Part of the plunder as the soldiers sacked the Summer Palace outside Beijing, the dog was renamed Looty in tacit approval of the activity of looting, itself a colonial term that originated from the Sanskrit word lût: “to rob”.

In the looped CGI animation, Looty slumbers peacefully for eternity surrounded by opium poppies, and this beguiling film is being screened in Digbeth and Victoria Square as well as in Eastside Projects. A meadow of wildflowers mixed with opium poppies is also being planted as a lasting legacy and a reminder of the complicated cultural and commercial alliances wrought by Birmingham’s colonial past.

There’s more problematic hybridity inside Eastside’s main gallery spaces, where Rajni Perera’s new installation A Starry-eyed Subspecies offers a prescient alternative equestrian monument to the colonial generals and grandees currently occupying city squares across the former British Empire and beyond. Perera’s installation of a life-size humanoid traveller sitting astride a six-eyed “post-horse” is set in a landscape she describes as mutated and poisoned by wealthy nations. Populating this dystopian world are multi-ethnic displaced climate refugees, such as her traveller and his horse who struggle to find the most basic life needs. Perera’s ambitious work proposes an evolutionary timescale thousands of years into the future, but many of its elements and challenges already seem ominously familiar.

6 Stones And Crystals That Are Safe For Your Health

The house has found a winning strategy in accelerating key trends at play in the auction realm.