Home News The Art Angle Podcast: Our Favorite Episodes of 2022 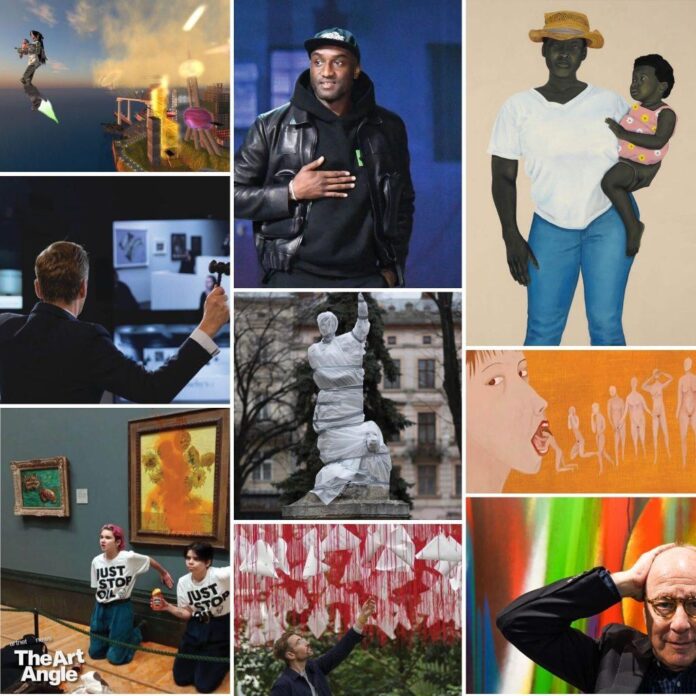 Welcome to the Art Angle, a podcast from Artnet News that delves into the places where the art world meets the real world, bringing each week’s biggest story down to earth. Join host Andrew Goldstein every week for an in-depth look at what matters most in museums, the art market, and much more, with input from our own writers and editors, as well as artists, curators, and other top experts in the field.

A lot has happened in the last year. From the war in Ukraine, to the artists fighting for visibility in Afghanistan, to the rise and fall of NFTs, and the introduction of A.I. art tools that could upend the livelihoods of artists (and journalists) everywhere. The metaverse also remains a confounding buzzword, and we break down what it is and could mean for the future of art.

This year also saw editions of the Whitney Biennial, the Venice Biennale, and Documenta; a trifecta that inspired Artnet News to do a deep dive into the economics and visibility of so-called “biennial artists.”

On the market side of things, the collection of Microsoft co-founder Paul Allen made history, raking in $1.5 billion at Christie’s, and we spoke to former and current auction house executives and art advisors about the psychology behind bidding at auction. Late in the year, a spate of protestors started throwing foodstuffs at famous artworks, and gluing themselves to frames, in a bid to draw attention to the climate crisis. We asked the question: are these activists helping or hurting their cause?

We’ve covered it all on the Art Angle Podcast, and to end the year, we’ve selected ten of our favorite episodes. Thanks for listening, and we’ll see you next year.

Listen below and subscribe to the Art Angle on Apple Podcasts, Spotify, SoundCloud, or wherever you get your podcasts. (Or catch up on past episodes here on Artnet News.)

Are Climate Activists’ Art Attacks Helping or Hurting Their Cause December 9, 2022

It has become one of the biggest and most sensational stories of the year: climate activists attacking works of art to draw attention to the global climate crisis. It is very effective at generating headlines, but is the act of throwing soup at a famous painting really changing anyone’s mind about climate change? Farah Nayeri, journalist and author of the book joins national art critic Ben Davis to discuss.

Jerry Saltz on What It Takes to Be an Art Critic Today December 2, 2022

Botticelli, Cezanne, and van Gogh, oh my! The biggest auction bonanza in the world came to Christie’s this year, when the late Microsoft co-founder’s trophy collection hit the auction block—and set a lot of records. We spoke to Mireya Lewin, the director of the Paul Allen Collection, and Max Carter, the auction house exec who made the sale happen.

Being a parent is hard enough—in the art world, sometimes it feels impossible. European editor Kate Brown spoke to artist Hettie Judah about her new book , which charts both how the art world has historically shut out caregivers, and what can be done to create a more equitable future.

When Virgil Abloh died unexpectedly in 2021, he left behind a creative legacy that touched on everything from sneakers to social responsibility. In August, the Brooklyn Museum mounted the first posthumous retrospective of the creative polymath in “Virgil Abloh: Figures of Speech.” Artnet News’s brand editor William Van Meter spoke to Jian Deleon, the men’s fashion and editorial director at Nordstrom, who collaborated with Abloh on one of his final projects.

This is the perfect primer for any dinner party conversation about the future of the internet, art, and, well, humanity. Art business editor Tim Schneider spoke to three experts: Wagner James Au, author of Tina Rivers Ryan, curator of Modern and contemporary art at the Buffalo AKG Museum in New York; and Sara Ludy, an artist and composer.

How Documenta Became the World’s Most Controversial Art Show June 10, 2022

The infamous quinquennial art show has been making headlines since it was founded in 1955. With complicated political ties to Nazis, funding crises, and this year, allegations of anti-Semitism, there’s a lot to discuss. In this episode, Kate Brown and Julia Halperin cover the origins of the show, and what’s in store for its future.

The Secret Codes of World-Class Art Auctions, Demystified May 6, 2022

Auctions are the most visible aspect of the notoriously opaque art market, but there’s a lot more to them than meets the eye. From the psychology of bidding to setting a presale estimate for the works, we pull back the curtain on the pageantry.

Is the Venice Biennale Any Good? Here’s What Three Art Critics Think April 29, 2022

The Venice Biennale, known in some circles as the “Art World Olympics,” is one of the most high-profile events of the year. After pandemic delays, transportation issues, and years of virtual studio visits (all of which you can hear about in our interview with curator Cecilia Alemani), three art critics discuss if, when all is said and done, the show is any good.

Is Fractional Art Investing the Future of the Market, or a Scam?

One of the most popular trends in the art market this year was the explosion of companies offering to help interested parties buy a piece of an artwork. But what exactly do you get, how does it work, and can you really make any money by investing in fractional ownership? Andrew Goldstein and resident art detective Katya Kazakina discuss.

How the Art World in Ukraine’s Besieged Capital Is Fighting Back March 18, 2022

In this powerful episode, art workers Vasyl Cherepanyn, the director of the Kyiv-based Visual Culture Research Center, and Nikita Kadan, an artist whose work is deeply imbued with his political activism, spoke to Kate Brown from their homes in war-torn Ukraine.