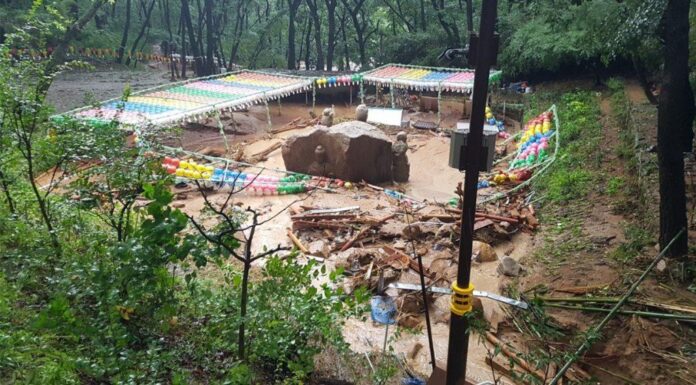 As of Wednesday, September 7, 32 cases of storm-related wreckage were reported at nationally significant locations, according to the South Korean Cultural Heritage Administration. Among the places affected were the Seokguram Grotto and the Bulguksa Temple, two Unesco World Heritage Sites located in the eastern city of Gyeongju.

The entrance to Seokguram, an 8th-century hermitage that holds a monumental statue of the Buddha, was partially destroyed, as was the front yard of the location’s administrative office. Tiles were blown from the roof of the main hall of Bulguksa Temple, a structure built in 774 where numerous national treasures live. Visitations are currently restricted at both landmarks.

Other sites in Gyeongju incurred similar levels of damage. The temple of Girimsa, where the Vairocana Buddha is enshrined, saw stone pillars and sections of road washed away, while trees surrounding the Baedong Stone Buddha Triad were felled.

The stylobate supporting the tomb of King Wonseong, who died in 798, collapsed, and mudslides erased expanses of soil at the Hwangnyongsa temple. A stretch of walking trail at the Bunsanseong Fortress in the southern city of Gimhae was also destroyed.

Working with local governments, the Heritage Administration has set into motion emergency plans to repair the damage.

The most powerful storm of its kind to hit South Korea in years, Hinnamnor dropped more than three feet of rain and brought extreme winds, razing roads, snapping power lines, and producing numerous blackouts. At least 10 people were killed and thousands more were displaced, per CNN.

The storm came just days after Frieze’s in Seoul brought scores of art world professionals into the country, many of whom had traveled plans canceled or delayed.

The collection will be auctioned in multiple sales, starting at Sotheby's London next week.