Known as an innovator in electronic, kinetic, and robotic sculpture, Alan Rath has created a constantly evolving set of works since the early 1980s. Born in 1959, Rath has a passion for technology since an early age. He refers to important childhood experiences, including NASA, Robert Moon, and Jimi Hendricks. Although Ruth is primarily self-taught in electronics and art, he received a bachelor’s degree in electrical engineering from the Massachusetts Institute of Technology (MIT) in 1982. He currently resides in the San Francisco Bay Area.

In all of his sculptures, Rath uses electronics designed and manufactured by the artist himself. He also writes software that brings his sculptures to life, preferring programs that avoid repetition and instead lead to the constant unfolding of performances. Many of his sculptures change their behavior over a long period of time, some take years or even decades to display new images. His works are admired for their fine craftsmanship and are often charged with subtle humor.

Rath participated in the Whitney Biennale in 1991, and his works have been exhibited all over the world. His sculptures are held in numerous public collections, including the San Francisco Museum of Modern Art, the Whitney Museum of American Art (New York), the Walker Center for the Arts (Minneapolis), the Los Angeles County Museum of Art, and the Hara Museum (Tokyo).

Alan Rath, the influential Bay Area artist known for his pioneering electronic sculptures, died on October 27. He was 60. The San Francisco Chronicle reported that his gallerist Dianne Dec, who curated exhibitions of his work at Hosfelt Gallery in San Francisco, said the cause was complications from a rare form of multiple sclerosis.

Since the early 1980s, Rath has created kinetic sculptures guided by the software of his own making. Rath’s robotic structures often feature computer-generated animations of disembodied human body parts—a roving eye or gaping mouth—exemplifying his interest in the relationship between human nature and mechanical and technological systems. In Vanity (1992), for example, custom-built electronics are contained within a mirrored cupboard, which reflects an animation of a man’s face. A later work, Watcher VII (2011), features two eyes jutting from either side of a white metal device.

Rath was born in 1959 in Cincinnati. He graduated in 1982 with a degree in electrical engineering from the Massachusetts Institute of Technology, where he studied with German kinetic artist Otto Piene at the Center for Advanced Visual Studies. Piene, a pioneering artist whose works considered motion using light and other materials, counted among Rath’s many influences, which also included Alexander Calder, David Smith, and Robert Moog, an American engineer and the inventor of the first analog synthesizer. 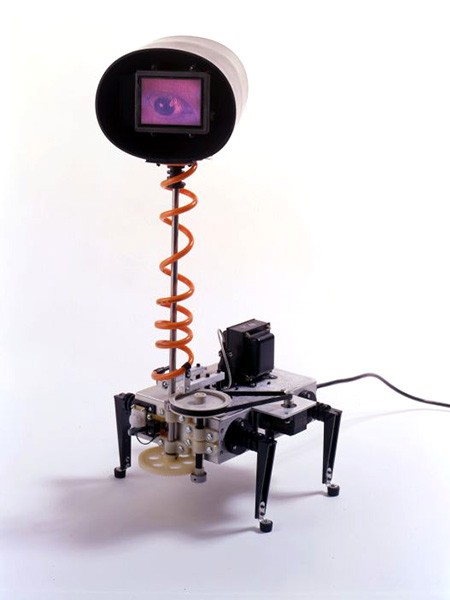 After college, Rath designed electronics for computer graphics, before gravitating back to the visual arts. “I wanted to go back to building my little machines,” he said. In 1983, he moved to the Bay Area, where his artworks soon gained critical recognition. In 1988 he was awarded a grant from the National Endowment of the Arts and was featured in the 1991 Whitney Biennial. In 2019, the San Jose Institute of Contemporary Art staged a retrospective of his work.

Today, his sculptures are held in the collections of the San Francisco Museum of Modern Art, the Los Angeles County Museum of Art, the San Jose Museum of Art, Berkeley Art Museum and Pacific Film Archive, and the Whitney Museum, among other institutions.