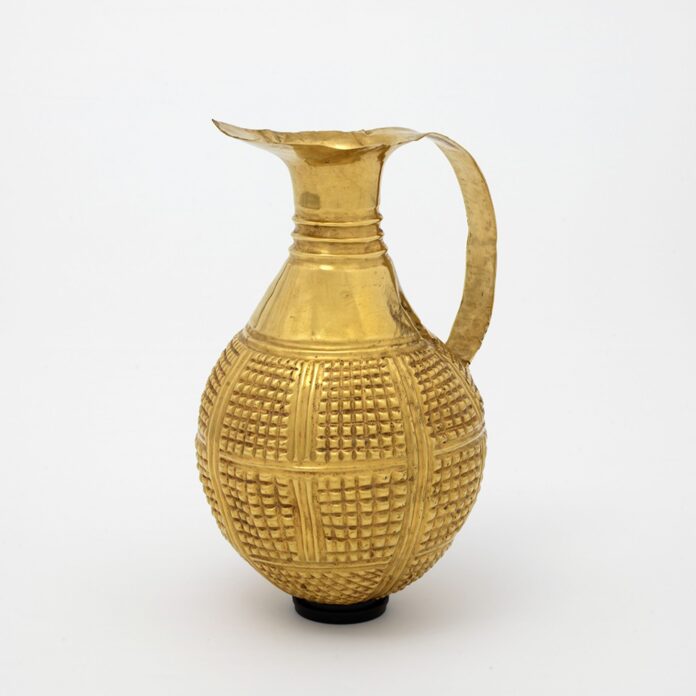 The piece was part of the Gilbert Collection which is not bound by the same legal restrictions around deaccessioning as the London museum.

A 4,250-year-old gold ewer looted in Anatolia has just been returned to Turkey by the Gilbert Collection, which is housed at London’s Victoria and Albert Museum (V&A). The ewer had been acquired in 1989 by Arthur Gilbert from a Los Angeles dealer who is now known to have handled illicit antiquities.

The collection of Arthur Gilbert, a British-born American property developer, initially went on display at Somerset House in 2000, a year before his death. In 2009 it was moved to a dedicated gallery in the V&A, on long-term loan from the Gilbert Trust for the Arts.

The collection comprises European decorative art crafted of gold, silver or micromosaics, so the Anatolian ewer, dating from around 2,250 BC, is very much an anomaly as the only antiquity. For this reason, and not because of any provenance concerns, it was never displayed in the V&A’s Gilbert gallery.

The Art Newspaper understands the price paid by Gilbert for the ewer was around $250,000, a substantial sum at the time. It is among the most important of the 1,200 items in the collection.

In 2018 the Gilbert Trust appointed a provenance curator, Jacques Schuhmacher, mainly to check the collection for Nazi-era forced sales or looting. The following year Schuhmacher turned his attention to the ewer. He was disturbed at what he discovered: the dealer who sold the ewer had been involved in the trade of illicit antiquities.

Schuhmacher believes the ewer was looted: “How the ewer left Turkey remains unknown, but there is no known export licence or plausible account of its origin. Every individual known to have handled the ewer before it was sold to Arthur Gilbert has been linked to illicit antiquities.” He believes it likely that it was looted in the 1980s.

Inquiries by The Art Newspaper establish that the ewer was sold to Arthur Gilbert by Bruce McNall, then a Los Angeles antiquities dealer. McNall reported that it had come from the Zurich restorer Fritz Bürki, who was later linked with the convicted Italian antiquities trafficker Giacomo Medici. These names might not have raised concerns in 1989, but they are now “red flags” for provenance researchers.

Although the ewer had been kept in a V&A storeroom, once its origins emerged it needed to be promptly returned to the Gilbert Trust, since it could not be allowed to remain on museum property. The museum needs to abide by the UK government’s Combating Illicit Trade guidelines for museums acquiring or borrowing antiquities.

The 2005 guidelines state: “Museums should acquire and borrow items only if they are legally and ethically sound. They should reject an item if there is any suspicion about it, or about the circumstances surrounding it, after undertaking due diligence.” Arguably the V&A should therefore have taken action many years earlier over the Gilbert ewer.

Relations between the Gilbert Trust and the V&A are close, which facilitated the subsequent arrangements. The trust is chaired by Nicholas Coleridge (V&A chairman) and other trustees include Tristram Hunt (V&A director) and Antonia Boström (V&A director of collections). Unlike the V&A, which cannot normally deaccession, the Gilbert Trust is not under the same legal restrictions.

The donation of the ewer was amicably discussed by the Gilbert Trust earlier this year with Turkey’s ministry of culture. It will today be unveiled in Ankara’s Museum of Anatolian Civilizations, where it will be displayed alongside three other ewers of a similar era from what is now north central Turkey. Schuhmacher hopes that the returning ewer will represent “a beautiful ambassador for the Gilbert Collection”.

Dispelling Rumors, Greece Has Rejected the British Museum’s Offer to Return the Parthenon Marbles as a Long-Term Loan