Hans Neuenfels’ production of Verdi’s Il trovatore premiered in 1996, and it presents all the dated features of that era: provocation, non sequiturs, random nakedness, mocking religion. The usual “look how edgy I am” kind of production. The dark plot is set in the Middle Ages, with a ghastly prequel. Fifteen years earlier, a gypsy was found next to the crib of Count di Luna’s second child, who fell ill and she was burned at the stake as the culprit. The gypsy’s daughter, as a revenge, burned the Count’s child. As Ferrando tells this tale to his soldiers in Act 1, we see a different story acted at the back of the stage, one of the few interesting ideas of this production: the child has a slight handicap, he can’t walk properly, his father is frustrated and bullies him. The gypsy is called to heal the boy and, when she fails, she is condemned as a witch.

In the following scene we hear the same story told from the other side. The gypsy’s daughter, Azucena, tells of the horror of seeing her mother burned at the stake, of her insane revenge plot, which ends with an abomination: she burns her own child by mistake, and ends up raising the Count’s son as her own. So Manrico, the troubadour, the gypsy’s son, is actually the brother of his mortal enemy.

This weirdly implausible plot was rendered even more incomprehensible by Neuenfels’ production, cluttered with butchers, bullfighters, concentration camp inmates, fencing skeletons, all in an apparently random sequence. Some scenes were visually striking, and the stage directions of the singers often careful and detailed. However, for example, the Act 2 finale was turned into a farce. Leonora is about to take her vows as a nun (she thinks her beloved Manrico is dead) and on stage we got: nuns with colourful religious habits, in groups (four red, four yellow, four blue …), an actor strapped to a Cross as Christ, a “dead” saint in a glass case, who started mouthing the words when Leonora sang, a Bishop with altar boys praying, kneeling at the glass case. And, to top it off, at the start of the (admittedly bouncy) music of the concertato, everybody started dancing! The nuns with the soldiers, Christ with the Bishop, Ines with Ferrando. 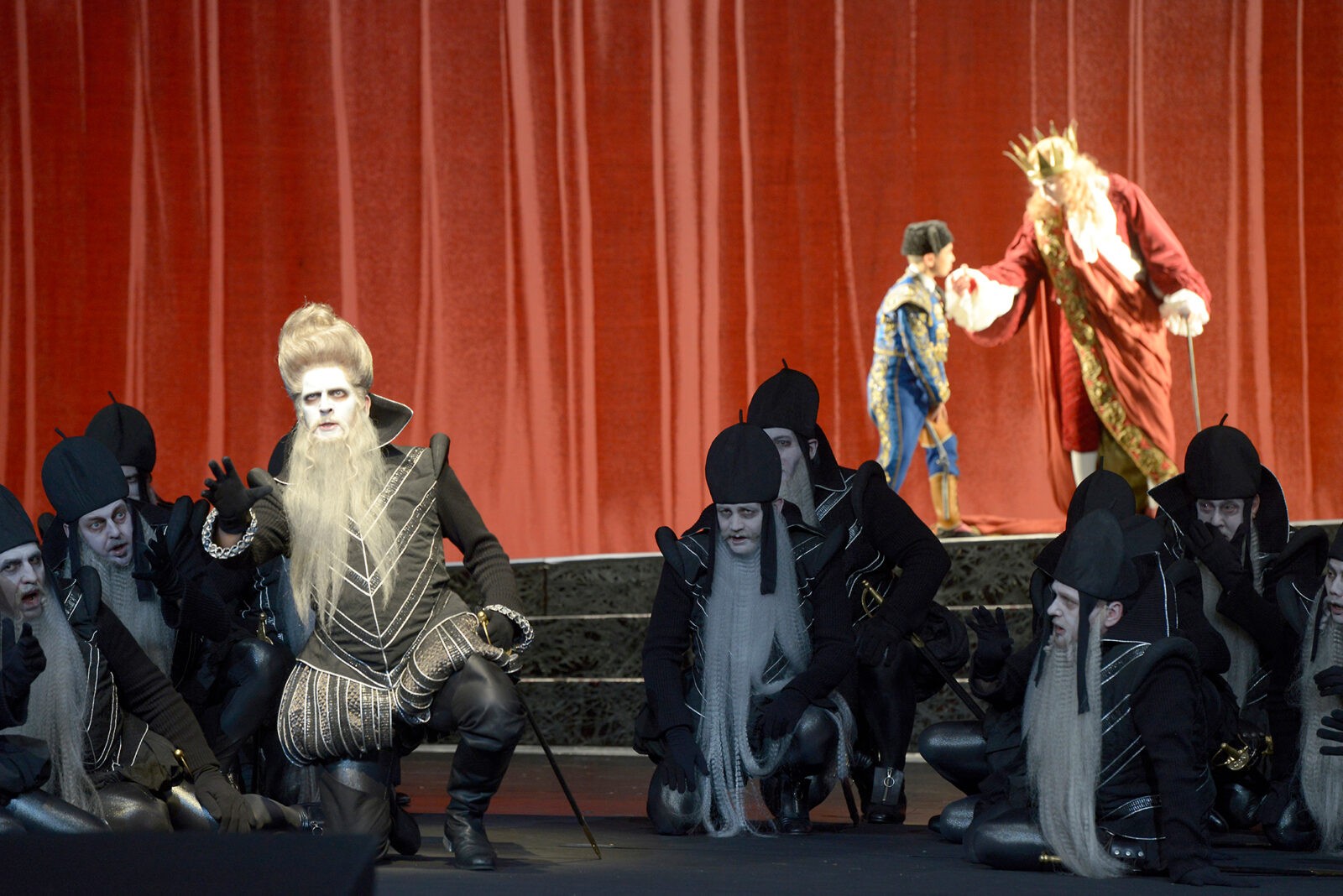 Anita Rachvelishvili was a magnificent Azucena. Her deep, powerful mezzo unleashed the fury of hell, when narrating her dreadful ordeal of the past, and yet found angelic tones to express her maternal love. Her colour palette was vast and beautiful, and she used it with good judgement, always true to the Verdian spirit, avoiding easy detours into verismo style. In the last scene, when in jail, Azucena daydreams about a peaceful, bucolic future. Rachvelishvili produced an hallucinated, ethereal sound perfect for the moment. Her success was undisputed, the tribute of the Berlin audience was thundering and unrestrained.

Angela Meade was Leonora, the love interest of the two brothers. She appeared in a farthingale gown, reminiscent of Velasquez’ paintings, quite a sight. Her soprano featured a legato based on a gentle portamento, confident coloratura, and absolutely ravishing filati. Her first aria-cabaletta (“Tacea la notte placida”) was impressive. She seemed slightly less comfortable in the second, the incredibly difficult “D’amor sull’ali rosee”; her vibrato tended to get in the way of the trills. But overall, her performance was stunning: she also produced a strong, well supported middle voice, which served her well in the scene outside Manrico’s prison.

Manrico, the troubadour, was Murat Karahan, who was very convincing in the heroic, macho scenes; he actually sang “Di quella pira” in C, as written, with a high C in mixed voice. He was much less at ease in “Ah sì, ben mio”, where he didn’t seem to find the right intention, his mezza voce a bit squeezed. 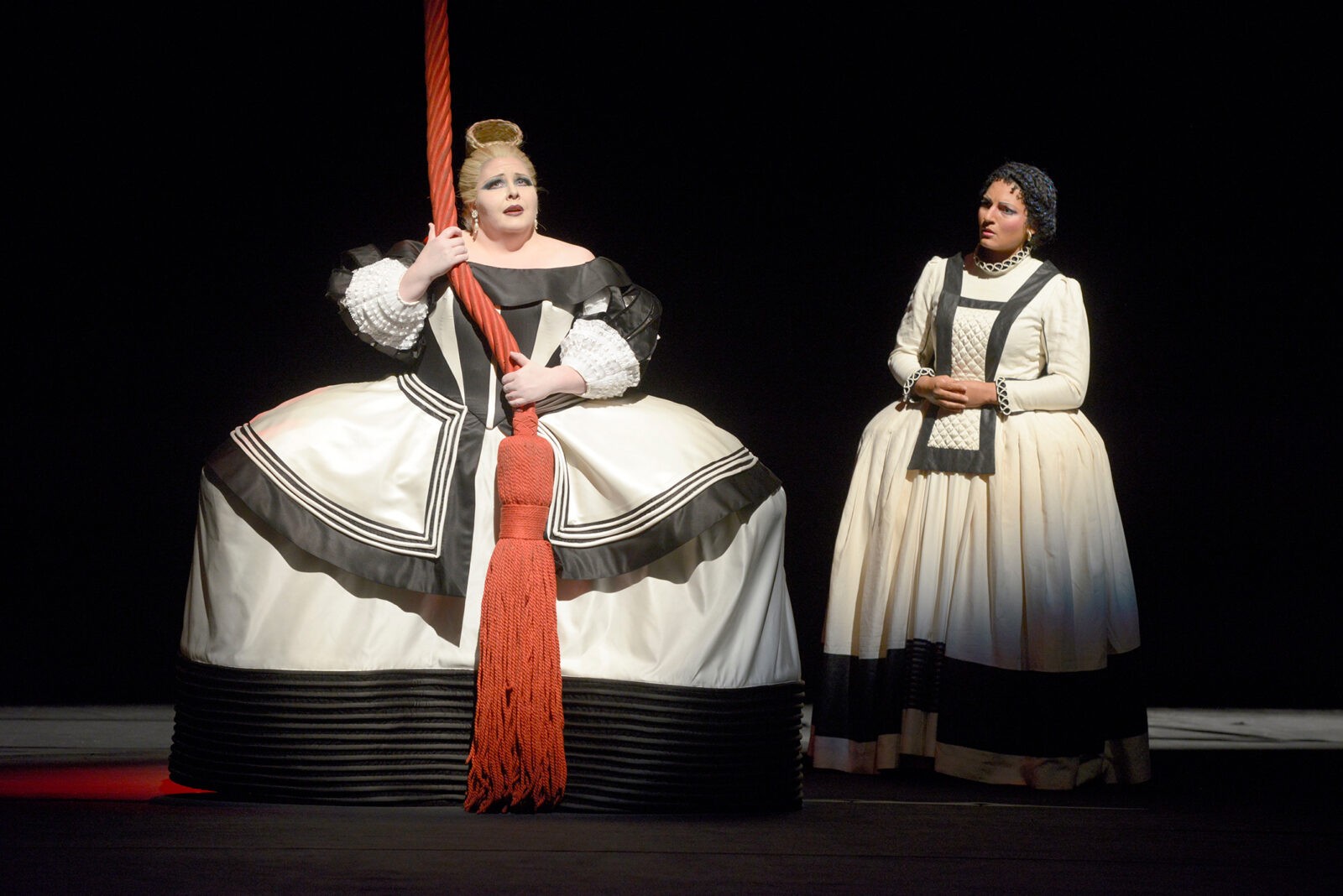 Simone Piazzola gave quite a good interpretation of Count di Luna. In “Il balen del suo sorriso” he showed impressive breath control and legato, and a beautiful, natural sound. His interpretation of the ruthless bad guy was believable and committed. Marko Mimica, as Ferrando, was very good throughout, his booming bass very well suited to the seasoned soldier. His aria at the beginning, where he narrates the dreadful prologue to the story, was a great success. In the small role of Ines, Alexandra Ionis made an impression, with a deep, warm voice and committed acting.

Conductor Giacomo Sagripanti did more than chase the gruesome story through the score: he supported the singers with a sense of proportion, leaving them room, showing good balance between drama and tenderness.