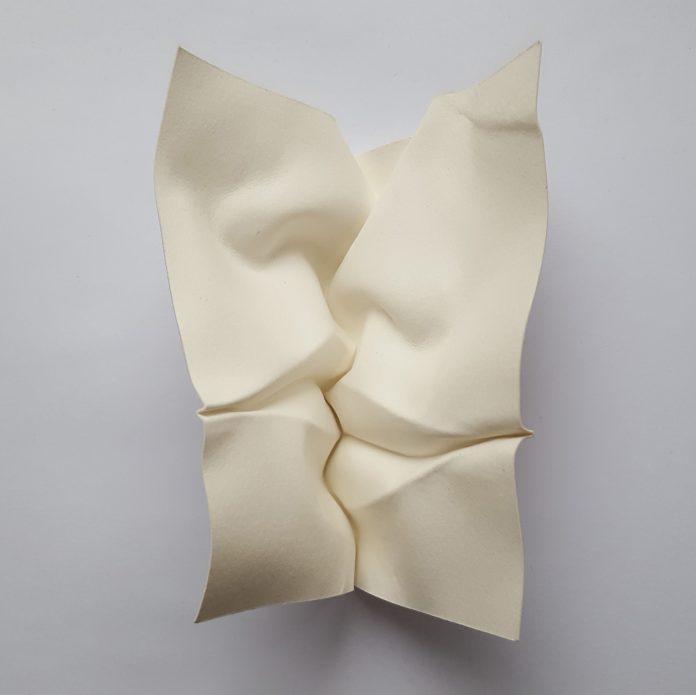 Polly Verity’s most recent paper sculptures test viewers’ sense of pareidolia. The dexterous artist employs single sheets of watercolor paper for her minimalist projects that morph into solitary faces and kissing figures through a series of bends and twists.

Verity tells Colossal that she’s been crafting repeating geometric patterns for about 15 years, but that it wasn’t until recently that she decided to move beyond crisp folds and clean lines. “When I hit the curved folds that’s when my brain popped. Seemingly impossible things could happen to a sheet of paper,” she writes. “My years of observing and investigating how curve folds behave has given me a feel for bringing the curves into the figurative realm.” The result is a suggestive series of facial profiles sometimes sucking on a straw or smoking a cigarette.

I tried to fold along the profile of a face, and I realized that I could tweak the paper on either side just very slightly and ease curves out to give volume and form. When I tried the same technique in watercolour paper, I suddenly had micro-control over the resulting curved forms and they became soft and sensual. So each face goes on to inform the next and they have become a sort of series.

Keep up with Verity’s paper creations on Instagram and check out which alluring pieces you can add to your own collection in her shop.