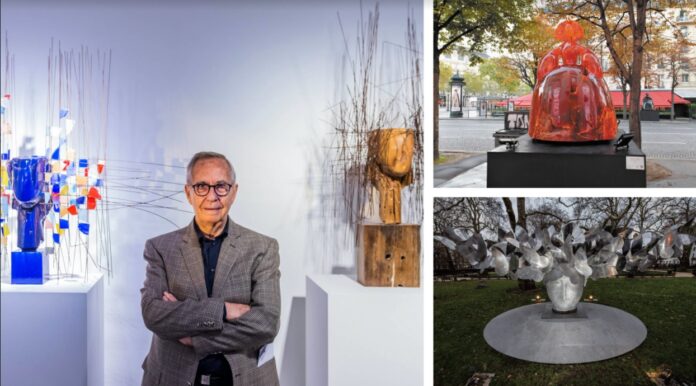 Known as one of the major artists on the Contemporary art scene, Manolo Valdés has been exploring for almost 60 years the great classics of History of Art, inscribing his œuvre in the path of great masters that preceded him.

Internationally acclaimed both as a painter and as a sculptor, Valdés is a pioneering and adventurous explorer of image, form and materials, instantly recognizable with his unique and innovative style.

Fascinated by matter and its properties, the artist gives it life in an unparalleled way. Aluminum, bronze, resin, stainless-steel, burlap, wood, oil, mirror, alabaster… all these materials gather to reveal the classical theme of the female portrait under a new light.

The exhibition in New York will present a selection of the newest works coming directly from the artist’s studio.

Valdés has developed a particularly acute awareness of the importance of the image and its iconic value. His œuvre is a stunning interpretation of the History of Art, and a glorious tribute to the Classics as well as the Masterpieces of the greats of yore, such as El Greco, Pablo Picasso, Henri Matisse, Constantin Brancusi… Using a broad range of raw materials Valdés subverts, reinvents or reinvigorates these familiar images and their established contexts.

The Menina, emblematic figure of his work and reminiscing of Diego Velázquez, will be featured in this exhibition in a variety of bright resins: orange, violet, black and blue. This very blue is a signature hue for the artist, known among connoisseurs as the “Valdés blue”.

His paintings’ titles, such as Matisse como Pretexto, come from an interplay between Valdés and his peers. Hence, he pays tribute to them utilizing their influence as a pretext: with Picasso, he plays with cubist portraits’ geometry and with Matisse he pays tribute to the first Fauvist painting La femme au chapeau.

According to Valdés, “Art of each era always gathers elements from the past; Art is a succession and an eternal addition”. The consistency of his passion for Classical and Modern Masters makes Manolo Valdés an artist whose Contemporary pieces are a bridge between history and our present.

Valdés also creates his Muses from looking at the world around him. He revealed that his Mariposas series is inspired by an extraordinary scene he caught at Central Park one spring afternoon: he met a woman surrounded by a swirl of butterflies and felt the urge to capture this moment.

Valdés encourages the viewers to engage with his pieces of art and feel them with their own, individual sensibility.

Receiving wide public recognition and acclaim, Valdés’ works have been exhibited in many of the world’s most important museums including the Met (New York), the Centre Pompidou (Paris), the Peggy Guggenheim Collection (Venice and Bilbao). His sculptures have also been exhibited in many public spaces such as Berkeley Square in London, the Avenue Georges V in Paris and the Piazza del Duomo in Pietrasanta, among others.

Opera Gallery is located at 791 Madison Avenue. Exhibition hours are Monday-Saturday 10am-7pm and by appointment. If you are interested in checking out the exhibition, visitors are encouraged to call 646-707-3299 or email nyc@opergallery.com to schedule an exclusive tour. Visit https://www.operagallery.com/ for further details.

In addition to the extensive and varied curated programme of exhibitions within our gallery network, Opera Gallery secures and protects the heritage of established Modern and Contemporary artists through collaborations with museums, art centres and foundations around the world.