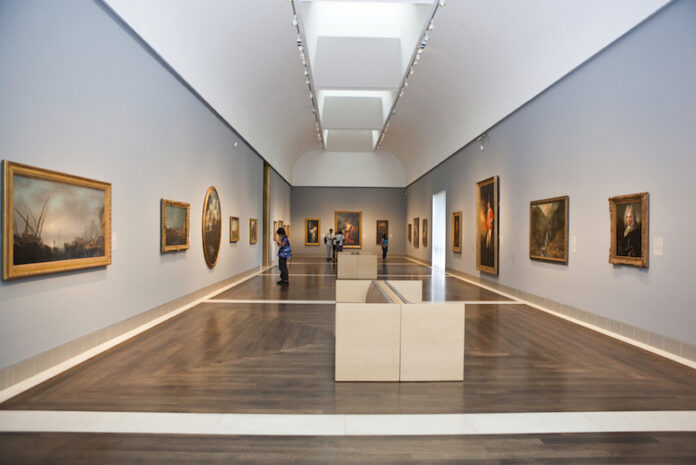 The Museum presents a selection of Spanish colonial paintings from the celebrated collection of Carl and Marilynn Thoma.

In the 16th century, European artists traveled to Latin America to meet the huge demand for artistic creations in newly established religious institutions. Sometimes, family workshops were founded that lasted generations. By the 17th century, artists born in Latin America began to dominate, and new styles and idioms emerged that had less and less to do with European origins. The 18th century saw the full flowering of Spanish colonial art, as regional schools and academies developed and influential patrons demanded both religious and secular paintings of the highest quality.

The introduction of new materials and technological innovation in the 18th century sparked an increased demand for luxury objects and useful wares made of ceramics, glass, and metals. These technologies and techniques allowed manufacturers to create wares to appeal to a broader and more diverse audience.

The Industrial Revolution affected not only how objects were made but also the organization of labor in workshops and factories. Behind famous names such as Josiah Wedgwood and Worcester Porcelain was a diverse, yet mostly unseen and nameless workforce composed of large numbers of women and children who were involved in various aspects of production and manufacture.

Hidden Hands: Invisible Workers in Industrial England focuses on the many hands involved in the production of these wares. The exhibition also challenges established ideas about craftsmanship and artistic authorship.

Georgia O’Keeffe forged a career as one of the most significant artists of the 20th century. She became famous for her paintings of flowers, skyscrapers, and landscapes, yet her lifelong connection to photography has not been explored in depth until now.

Georgia O’Keeffe, Photographer is the first exhibition devoted to O’Keeffe’s work as a photographer. Nearly 100 photographs from a newly examined archive reveal the American icon’s Modernist approach to the medium. Complementing the photographs are paintings and drawings to represent the full scope of her career.

Captured on film throughout her life—in early family pictures, travel snapshots, and portraits by a cavalcade of photographic artists—O’Keeffe (1887–1986) was no stranger to the medium. She expressed her unique perspective through all aspects of her life, and by the time she began her photographic practice in the mid-1950s, her singular identity and artistry were well established.

The MFAH presents the U.S. tour of Afro-Atlantic Histories, an unprecedented exhibition that explores the history and legacy of the transatlantic slave trade. The exhibition comprises more than 130 works of art and documents made in Africa, the Americas, the Caribbean, and Europe over five centuries, from the 17th to the 21st.

The exhibition premiered at the Museu de Arte de São Paulo (MASP) in Brazil, and the U.S. tour builds on the presentation through the overarching theme of histórias—a Portuguese term that can encompass both fictional and non-fictional narratives of cultural, economic, personal, or political character. The term is plural, diverse, and inclusive, offering viewpoints that have been marginalized or forgotten. Afro-Atlantic Histories unfolds through six thematic sections that explore the varied histories of the diaspora.

Alexander Calder and Pablo Picasso—two of the foremost figures in 20th-century art—come together for a fascinating encounter in this presentation. The internationally traveling exhibition features paintings, sculptures, mobiles, and works on paper spanning the artists’ careers.

Calder-Picasso explores the artists’ prolific affinities as it reveals the radical innovation and enduring influence of their art. Conceived by the artists’ grandsons, the exhibition focuses on Calder’s and Picasso’s exploration of the void, or absence of space. Calder explored the absence of mass in his sculptures, and Picasso expressed contortions of time in his figurative work.

American artist Calder (1898–1976) and Spanish artist Picasso (1881–1973) both headed to Paris as young artists: Picasso in 1900 and Calder in 1926. Though their lives and work shared many parallels, the two men were not close, known to have met on only four occasions. Calder and Picasso were both engaged by the relationship of volume to space, and both pursued simplification to arrive at the essence of a subject.

The MFAH is the final stop on The Obama Portraits Tour, which travels to five cities from June 2021 through May 2022. The tour begins at the Art Institute of Chicago, followed by the Brooklyn Museum, the Los Angeles County Museum of Art (LACMA), and the High Museum of Art in Atlanta before concluding in Houston.

The Obama Portraits Tour is expected to reach millions of people who might not otherwise have an opportunity to view these remarkable paintings. In addition to the paintings themselves, the exhibition features audio-visual elements and educational programs. This special presentation enhances conversations surrounding the power of portraiture and its potential to engage communities.