Home News Apple Has Teamed Up With the Getty to Unleash Augmented-Reality Demons Inspired...

The artworks of William Blake are known for their highly charged, spiritual energy. Now, they are getting a high-tech new incarnation with “United Visions,” an augmented reality (AR) experience by creative technologists Tin&Ed (Tin Nguyen and Edward Cutting) made for the Getty Museum in partnership with Apple.

The tech giant’s purpose-built Blake app is being unveiled as part of the launch of its newest London branch in Brompton Road, where you can sign up for sessions demoing it. (Nota bene: The experience requires an iPhone 11, iPad Pro, or more recent Apple device.)

Viewing the space around them through the window of the app, users will encounter fantastical creatures recognizable from some of Blake’s most celebrated works. These life-size apparitions have been sculpted using 3-D software and brought to life through motion capture technology.

Among the monsters to be seen are large serpents, a frequent motif for Blake. Tin&Ed were specifically inspired by Satan Exulting over Eve (1795), an image in the collections of both the Getty and the Tate. 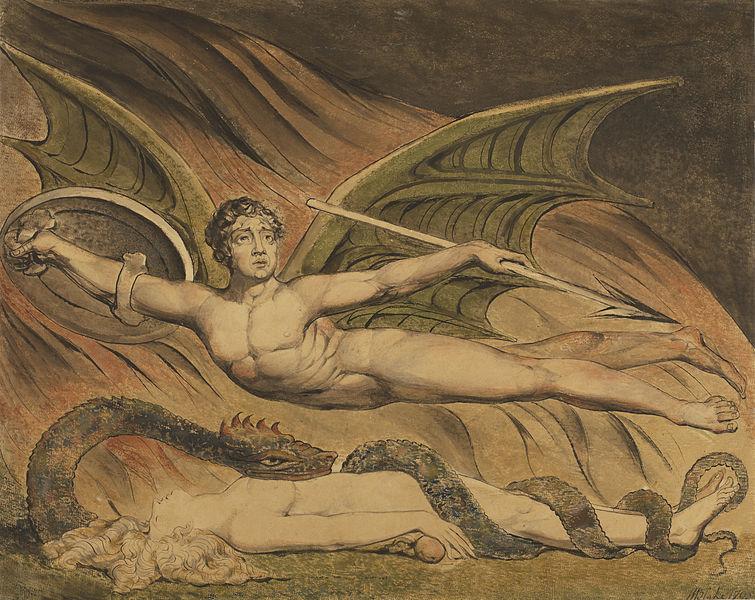 In a statement, the duo promised that the AR work “cracks Blake’s imagination wide open.” “United Visions” sets out, they wrote, to celebrate the hybrid nature of Blake’s angels, demons, and beasts: “No identities are fixed. Instead, they undergo constant transformation, making and unmaking themselves.”

The app’s soundtrack by Just Blaze also helps to bring Blake’s visionary entwining of poetry and art into the modern day as well. The hip-hop producer, who has in the past worked with Jay-Z, Drake, and Beyoncé, has layered in some of Blake’s own verses, including read by his son Solomon Smith, as well as other lines by “urban poet and actor” Oveous Maximus.

Tin&Ed are Australian artists living in New York. Both are a member of NEW INC, an art and technology incubator run by the New Museum. They have previously shown work at the Rockefeller Center in New York, Sydney Opera House, and the Barbican Center in London.

The new commission rides the trend, seen in popular shows like “Immersive Van Gogh” and “Frida: The Immersive Experience,” for engaging with treasured art historical figures through the lens of immersive modern technologies. Previously, Apple has teamed with the New Museum to work with contemporary artists including Nick Cave on AR experiences.

This is not the first tech spin on William Blake either. Last year, the artist’s The Ancient of Days (1794) was digitized using multispectral imaging analysis, producing a similarly striking but moodier effect. That work was sold as a series of 50 NFTs on the marketplace Hic Et Nunc by the Whitworth gallery in Manchester in partnership with Vastari.

A major exhibition of works by Blake is planned for the Getty late next year.