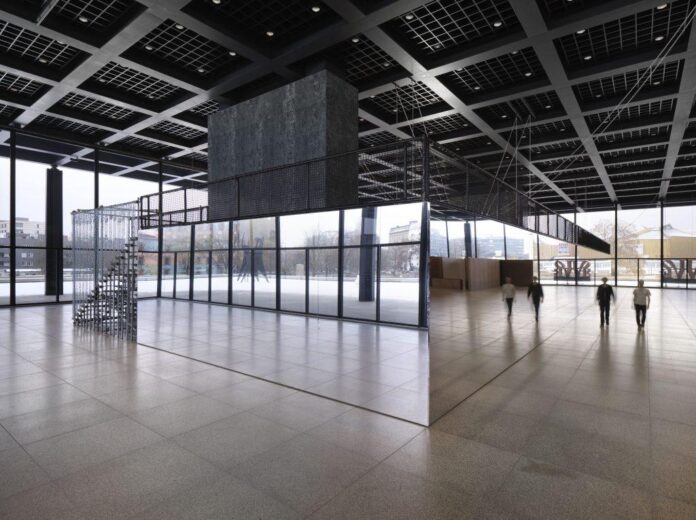 Monica Bonvicini’s new show is slightly cozy—which might seem a surprising takeaway given that the artist is known for making a two-story-tall whip and other fetish-inflected sculptures constructed from leather belts, icy white lightbulbs, and galvanized steel.

Melodrama is still a component in her major solo exhibition, “I Do You,” which opens to the public tomorrow, November 25, at Berlin’s Neue Nationalgalerie. The fact that there is any hint of coziness is probably because the prized museum in Berlin, built by Mies van der Rohe in the late 1960s, is far from a white-walled cube. It has none of those clinical vibes endemic in art spaces that make one feel slightly uneasy when stepping into them. But while this show has, on the whole, a less punishing mood that we are used to from the artist, there is still power-play, kinky choices to make, and bondage: you can handcuff yourself to the building for 30 minutes, if you want to.

The Neue Nationalgalerie, opened last year after six years of meticulous renovation, is a particular challenge. “I’ve heard many times that this building isn’t good for contemporary art—that is not true,” the Berlin-based artist said as she welcomed press to an early walkthrough of the exhibition. While the minimal, but character-filled space is arguably Berlin’s most important museum, it has earned a reputation among contemporary artists as a space to rather than to use. There are basically no walls, and there are plenty of massive marbled columns, as well as the building’s protected heritage status, to navigate. 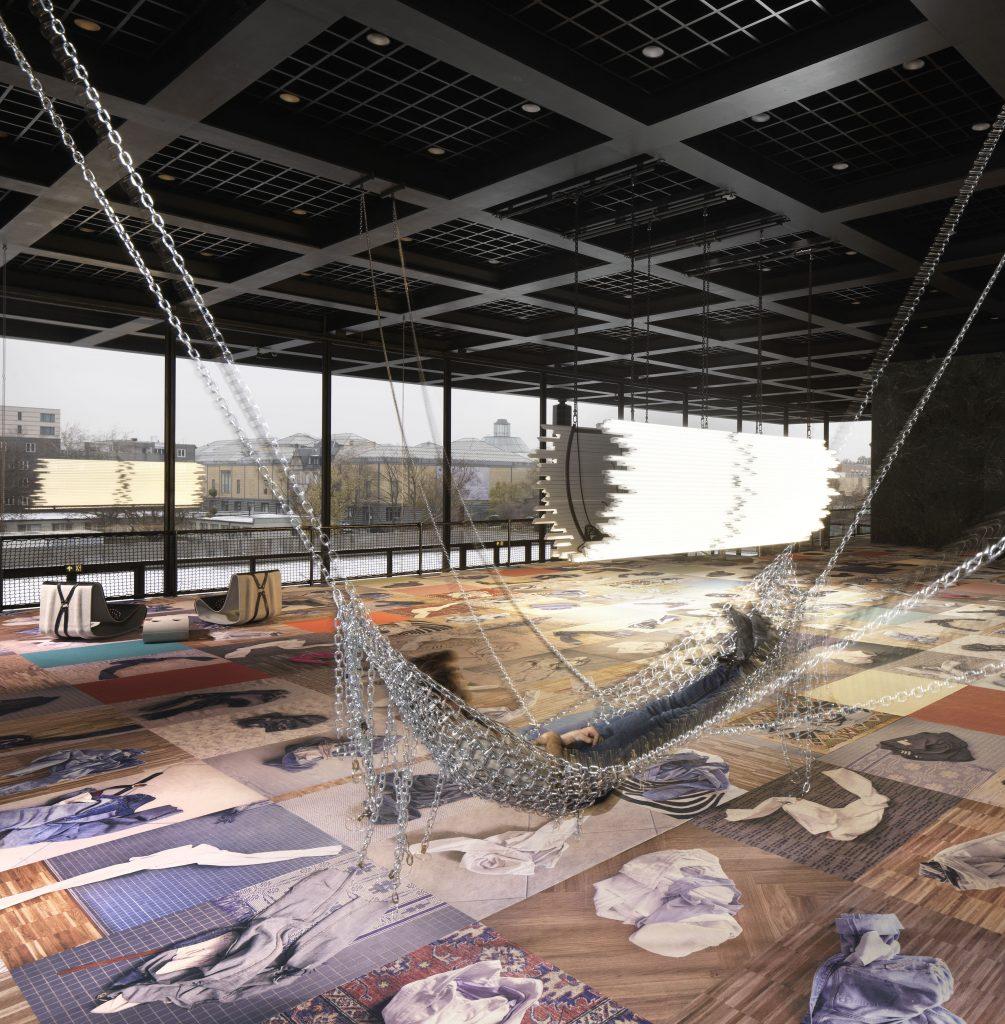 But Bonvicini’s creative advantage is that she is by several counts a local—the Italian artist has been living and working in Berlin, and visiting the building, for more than 30 years. (As a local, she has also been close to events roiling the Berlin art world: In the run up to her exhibition, headlines were preoccupied by #MeToo allegations published against her longtime Berlin dealer Johann König, which he denies. She paused her representation with the gallery, but after facing public pressure to clarify their working relationship, the dealer made the decision to end the representation.)

Although Bonvicini’s famous saying that “you can avoid people, but you can’t avoid architecture” might be given some extra inflection in light of those recent events, it’s clear that she has thought about this building. When the building finally reopened after its multi-year, €140 million revamp, its first contemporary show in the main gallery was a surprisingly minimal Barbara Kruger installation that was only on the gallery’s floor. Compared with that, Bonvicini’s takeover packs a punch.

That success stems from her clever wrestling with the architecture. She has embraced quirks of the museum, whose floor-to-ceiling windows also mean that the surrounding hodgepodge of post-war architecture—including the philharmonic hall, the Painting Gallery, and a cluster of skyscrapers—become inevitable protagonists in whatever artwork happens to go inside this prestigious space. To deal with this, Bonvicini installed a building-sized foiled mirror to lean against the exterior of the building. Inside, another large mirror runs the length of the gallery, slicing it in half. Absorbing and projecting the surroundings, it is a cheeky sort of retort and an attempt to grab-back at the building’s ascribed “masculinized power,” as its termed by the curators. 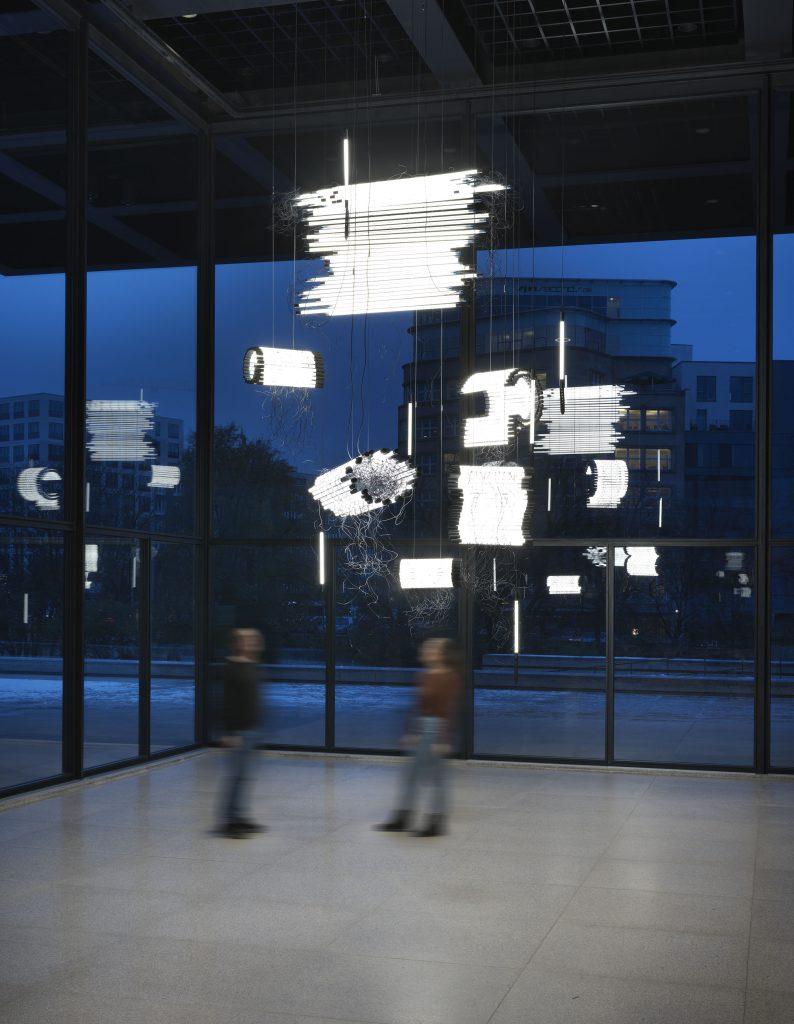 Not everyone need be so imposed by this reading of the architecture. In my view, the building is not cocky, it is also quite welcoming and intimate. I noticed that more though only after hanging around Bonvicini’s installation of an indoor (wheelchair accessible) balcony made from reworked sculptures. It is a little bit like a clubhouse, and it also recalls the viewer decks at Berlin’s industrial clubs like Tresor. Up its stairs, I sat on one of her two chain swings with a stranger while we gripped the sides, trying not to awkwardly collapse into each other. While swinging, one is up close to the museum’s spotlights, which are a very warm yellow; nested on two sets of BSDM chairs near the carpeted floor (made from printed pictures of dropped trousers), you are framed by the buildings smooth green marble.

The fact that it all of this art clashes with the vibe of the building is just par for the course of being near Potsdamerplatz, a garish and weirdly executed project built on war rubble. Like the area around it (which is soon gaining the Museum of the Modern, a massive Herzog & de Meuron-designed institution that has already been christened by the cranky German media as an “expensive-looking Aldi”—a budget grocery store), Bonvicini’s work is slightly unfinished. Her terrace sits atop a structure roleplaying as a construction site, like an open-ended proposal. What happens here next?

Downstairs, a pile of stones culled from the old Alte Nationalgalerie, (1998), offers an anchor point for thinking about the shifting power relations between Berlin’s architectural sites and spaces for encounter—those of its past, future, and those not yet even dreamed up.