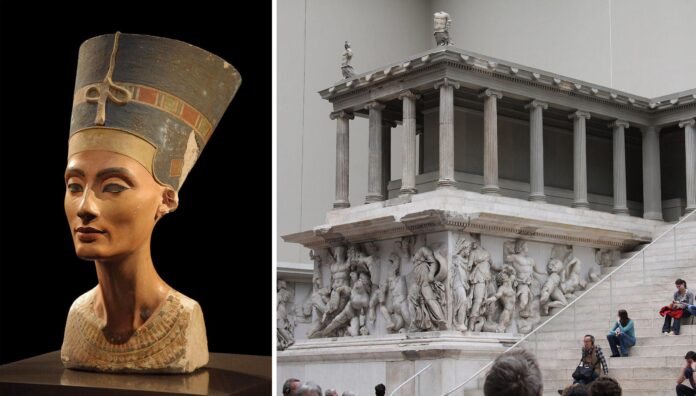 This statement came after Kreck’s deputy, Saraya Gomis, spoke out last month in favour of the return of the two artefacts in an interview with the news publication Tagesspiegel.

“Personally, I’m in favour of the Pergamon Altar and the bust of Nefertiti being returned,” Gomis said. “From an anti-discrimination perspective, one has to say: All the cultural assets from other regions of the world do not belong to us, they are here illegally.” She added that returning the artefacts was not her decision to make.

Gomis’s comments have sparked a debate in Germany, with the conservative Welt news outlet publishing a comment piece by the art critic Marcus Woeller titled “Our Mona Lisa must stay in Berlin”, referring to the beauty of the 1340 BC bust, which depicts the wife of the pharaoh Akhenaten. The Nefertiti statue was discovered at the Egyptian site of Tell el-Amarna in 1912 by the German archaeologist Ludwig Borchardt. Egypt has demanded its return ever since the bust was unveiled in 1924, though the Prussian Cultural Heritage Foundation claim that they do not have an official demand for restitution of Nefertiti. The foundation also claims that it was taken out of Egypt legally, though this is disputed by the North African country.

Turkey has long demanded the return of the Pergamon Altar. Dating from the second century BC, the Ancient Greek monument was acquired by Germany under an 1879 agreement with the Ottoman government.

Gomis’ interview came in the wake of Germany’s decision to restitute its Benin bronzes—a collection of medieval bronzes that were looted by Britain and sold to Germany—to Nigeria.

The historian of German colonialism Jürgen Zimmerer told The Art Newspaper that the return of the Benin bronzes was “a meaningful breakthrough because it meant the responsibility was no longer just for the crimes of your own country but also profiting from the crimes of another colonial power”.

According to Zimmerer the removal of the Nefertiti bust and the Pergamon Altar from their countries of origin took place under similar circumstances—under colonial laws or political pressure—and by the same logic should be returned.

The Berlin Ministry of Justice told The Art Newspaper: “While Saraya Gomis stands by her view and welcomes the vivid public debate she is unfortunately not able to discuss restitution matters for specific objects at present.”