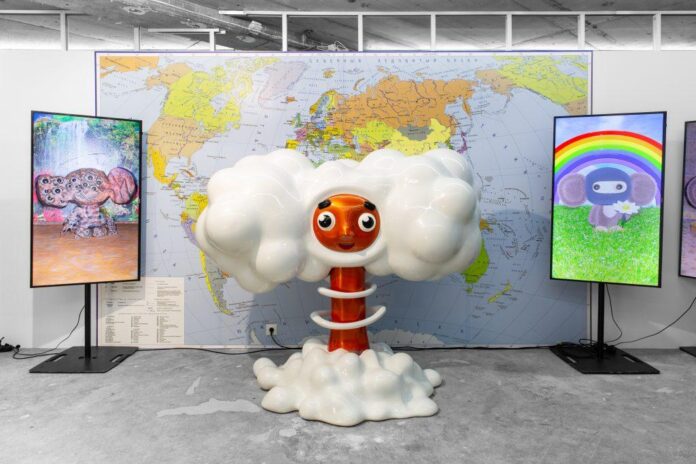 The Paris Internationale art fair opened its doors to the public today, October 19, with one of its decidedly “most ambitious editions to date,” according to show director Silvia Ammon. It also opened in what is now a very different art market landscape in Paris.

This year’s edition, which includes 60 exhibitors from 26 countries, is running alongside the brand new Paris+ by Art Basel, which touched down in the French capital with its VIP opening today, October 20, after the French-owned art fair FIAC was ousted from its longtime October slot in the Grand Palais.

While Paris+ takes place nearby at the temporary location of the Grand Palais Éphémère (the historic palace is undergoing restoration), the annually roving Paris Internationale is being held this year at the gutted and beautifully lit former studio of the 19th century French photographer Nadar, which also happened to be the site of the first Impressionist Exhibition in 1874. The fair is open until October 23.

As the French capital teeters towards a total revival, Paris Internationale is also dusting itself off and revamping its advisory board. A key early appointment was announced this week: Michèle Sandoz, who worked for almost nine years as Art Basel’s global head of VIP relations and strategy, has joined. 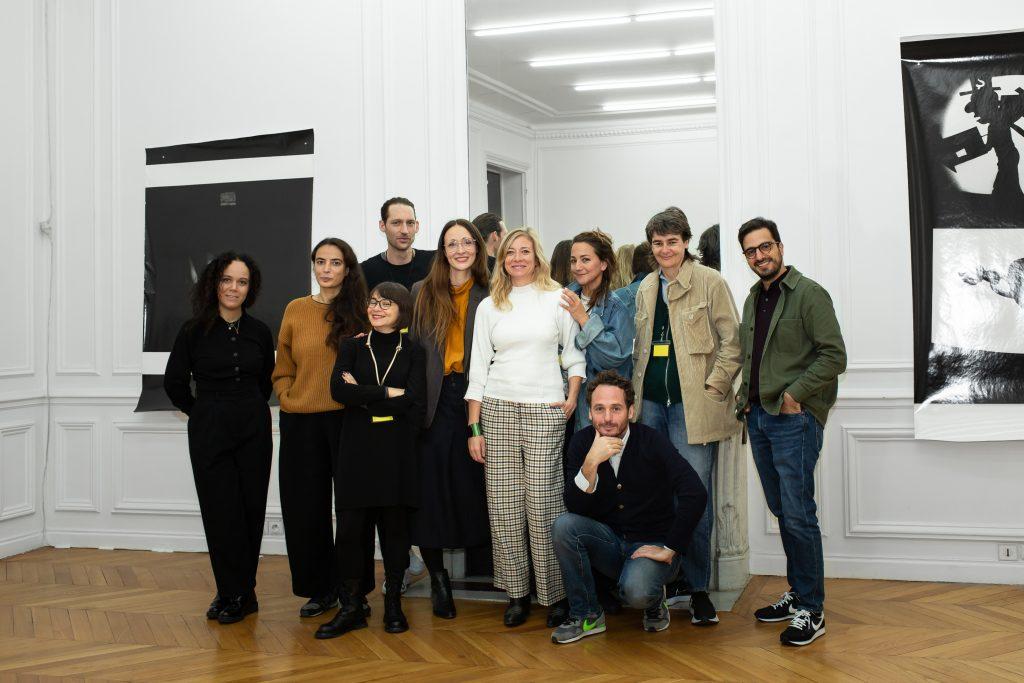 Ammon said other members of the board would soon be announced and that the art fair is continuing to develop and shift its image away from being seen as simply a hip alternative fair. “We’re not just a young fair. We are numerous galleries, many of whom have existed for over 10 years now and who participate in the general sectors of large fairs,” she said, adding it was important for the fair “to affirm its multigenerational character.” Though the fair’s “intimate” size will be maintained, “we are ambitious for the future,” she said.

Such a sentiment has good reason: Paris Internationale was once considered a fresh perspective set against the older, more buttoned-up FIAC. Now, the emerging art fair has an eye-catching new Swiss neighbor. Both fair organizers expressed their on-going, collegial relationship with Artnet News.

Some longstanding participants in the 2022 edition include BQ in Berlin, who presented a must-see solo presentation by German artist Mara Wohnhaas, born in 1997. She performed an absurdist piece called , straining to be heard as she read a text she wrote over the deafening whirl of leaf blowers aimed at her head; the artist rushed to finish reading before the printed text was destroyed in a shredder. 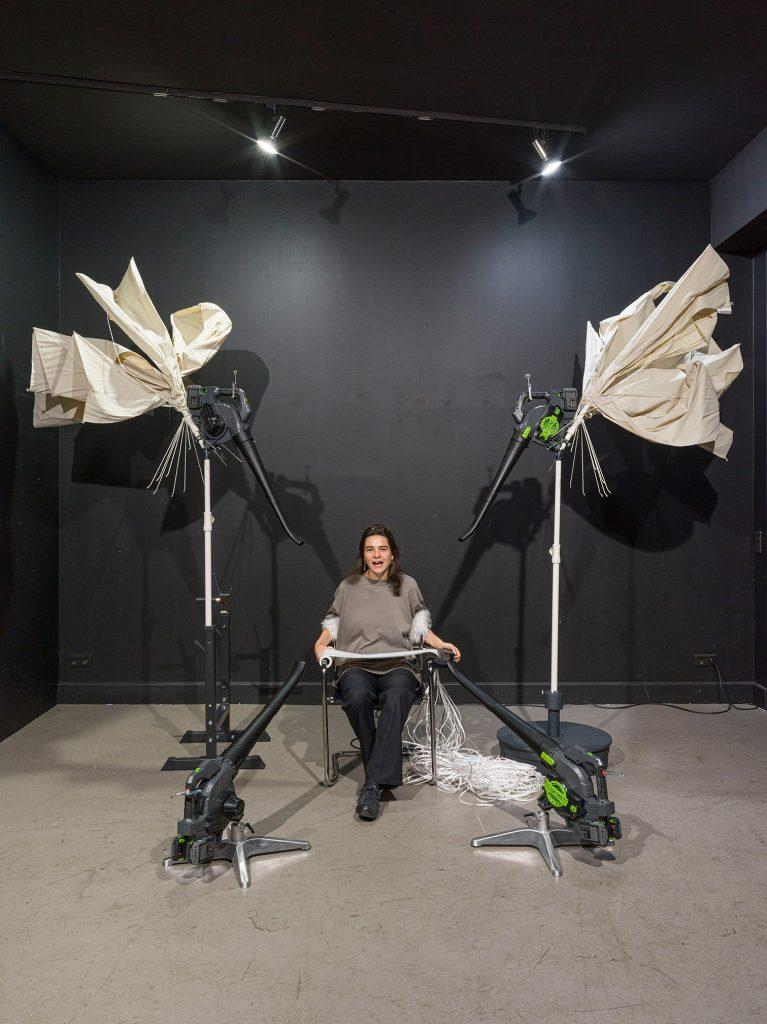 “It’s an effort that is doomed to fail,” she said of the performance work, which “deals with self-sabotage.” The objects and texts Wohnhaas creates for performances remain as sculptures after their use, and range from €4,000 to about €20,000 ($3,914 to $19,570). The gallery sold one work early in the day, and received a lot of curatorial interest.

At the new Theta gallery, based in New York, captivating ready-made sculptures by David L. Johnson consider how movement is restricted via elements added to public sites. Johnson removed metal spikes installed on public piping elements that prevent people from sitting down. Installed at the same level where he had found them, they appear like animal traps, or tools of strange torture with lines and composition that form their own, dark poetry. Priced under $10,000, the gallery said they had already made some sales by the first day.

Pastel figurative works by young Turkish artist Gökhun Baltaci at Galeri Nev, from Ankara, sold out in the first 15 minutes of the fair, according to the gallery founder Deniz Artun, who was still processing the overwhelming response to the show, which included one institutional acquisition. With one impressive tryptic on a free-standing wooden panel, Baltaci’s rich, layered pastel imagery is often autobiographical and draws on art history. Works were priced between €2,000 and €7000 ($1,957 to $6,852). 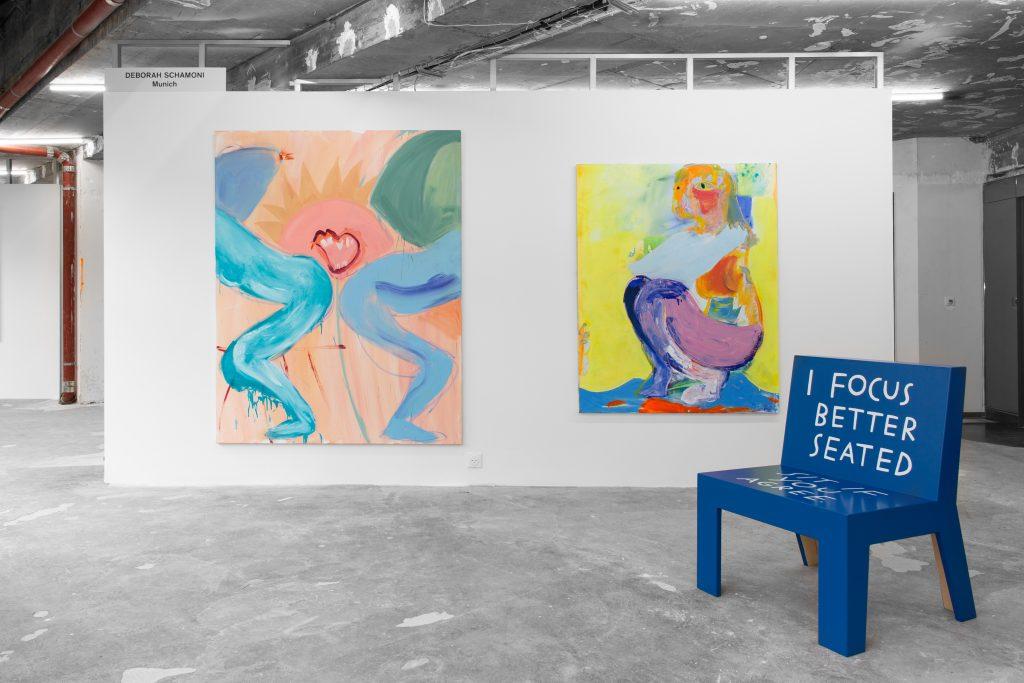 For something more rock and roll, Three Star Books, from Paris, featured Jonathan Monk’s “Heavy Metal Paintings” series; the works were made by soaking heavy metal band T-shirts in Indian ink and throwing them onto canvases. Works cost around €9,000 ($8,810).

Feminism was a recurring theme at the fair, as seen in a series of unglazed clay vulvas by Russian-Algerian artist Louisa Babari titled (2019) at New York’s Rhizome gallery. Elsewhere, Justine Kurland’s work at Higher Pictures Generation, also from New York, drew on the radical feminist Valerie Solanas’ . Kurland cut up images from photography books by historic, white male figures, and reconfigured them in hyper-detailed collages, many of which took vaginal form. “Before making the work available to collectors, Kurland offered to sell them to the original photographers. None of the men have taken her up on her offer,” said the artistic statement.

The bustling preview day of the fair was a promising sign for its longevity in the face of transformations in the Paris scene. Guillaume Piens, director of Art Paris, who was spotted roaming the aisle, was positive about the new Paris fair scene. “Paris+ is very good for Paris Internationale,” he said. “I saw the Basel crowd wandering the Paris Internationale fair alleys, and there were very good sales, so it’s great.” Indeed, the emerging art fair is listed on the VIP program for Paris+.

Ammon, director of Paris Internationale, is also optimistic, though she noted that “time will tell” what the real impact Paris+ will be. “Art Basel has understood Paris’s potential, which is something which we perceived in 2015,” she said. Ammon also hoped “Paris’s strength will make more people want to collect art, to become interested in contemporary art. That’s what we want to get moving: art in this city.”

“Each fair brings a unique and complimentary offering and adds to the vibrancy of this week,” Paris+ director and former co-director Paris Internationale Clément Delépine told Artnet News. He addressed what Marc Spiegler, Art Basel’s global director, described as “initial fears” about the arrival of Art Basel in Paris, at the larger fair’s press conference yesterday, October 18. “From the outset, it has been our desire to collaborate with the broader Parisian arts scene and its multiplicity of cultural actors, and that includes Paris Internationale,” said Delépine. “It is important for a healthy art ecosystem to have platforms that sustain galleries at all levels of the market.”