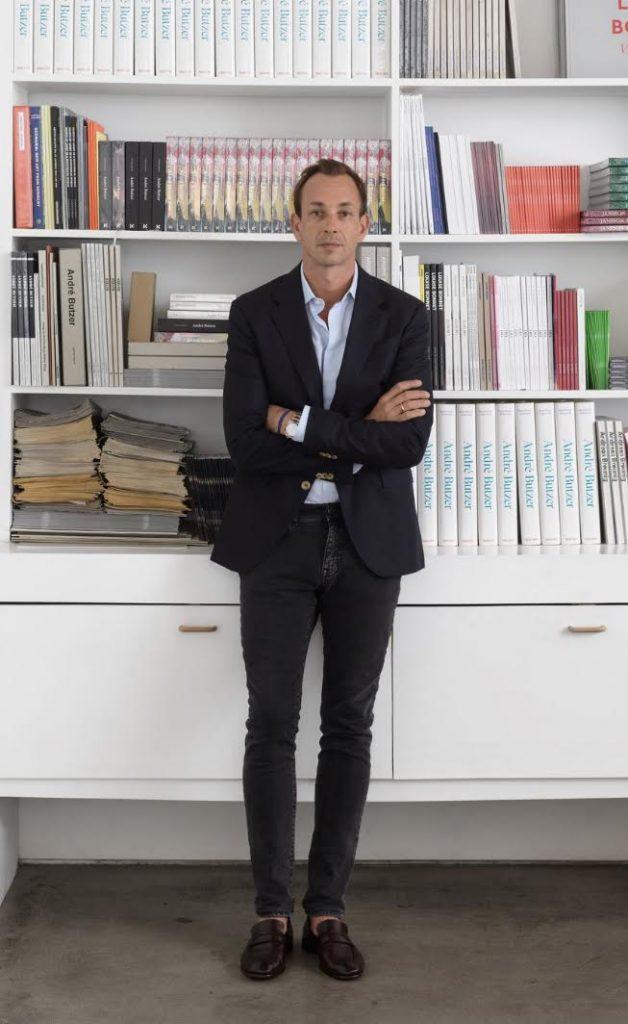 Nino Mier is aware that you might think he’s kind of shady.

“I don’t know what it is,” the gallerist told me with genuine bewilderment. “Why do they love to hate me so much? I think it could be my name? Nino Mier. Neeeno Miiiier. Nino Meyurrrr,” he intoned before trailing off. We were sitting at the Esme Hotel on Collins Avenue during Art Basel Miami Beach, both of us nursing a hair-of-the-dog Bloody Mary. “I think they assume this rise and this success could possibly have come by someone else’s hand, which is just not true,” he huffed. “I just know that if you take the time to get to know me, I think you would think very differently of me.”

And that is exactly what I was there to do. Mier, whom I had always emphatically associated with the prototypical Los Angeles dealer—reliable tan, slick slim-fitted suits, and a flashy grin—is opening a New York gallery this January with a solo show by Jana Schröder. The space opens during an onslaught of coastal cross-pollination, with a handful of ambitious L.A. galleries (Nicodim, David Kordansky, et al.) exploring opportunities in New York, and bolshy Big Apple mainstays following rumors of gold out West (David Zwirner, Marian Goodman, and Sean Kelly among them).

“Everyone was telling me to go check out Tribeca, but [my heroes are the dealers of] the downtown art scene of the ’80s, ’90s in Soho,” he said, namechecking Leo Castelli and Mary Boone. The gallery will open on January 27, just next door to buzzy restaurant Balthazar on Crosby between Spring and Broome.

Aside from the history of the area, Mier is excited for the more collegial spirit of art dealing in New York. “It seems like New York gallerists seem to be friends. I don’t see a lot of L.A. gallerists having lunch together,” he said pointedly.

Mier clearly has a chip on his shoulder, and seems to believe the whole art world is out to get him. He’s not paranoid. While I was reporting this piece in Miami, I asked around. The rumors swirling included that he was a flipper (I’ll get to that) who had some unconventional business practices—but mostly, I just got a lot of knowing looks. One prominent New York dealer described him as ruthless before adding, “But then again, we’re all kind of doing something a little shady, aren’t we?” 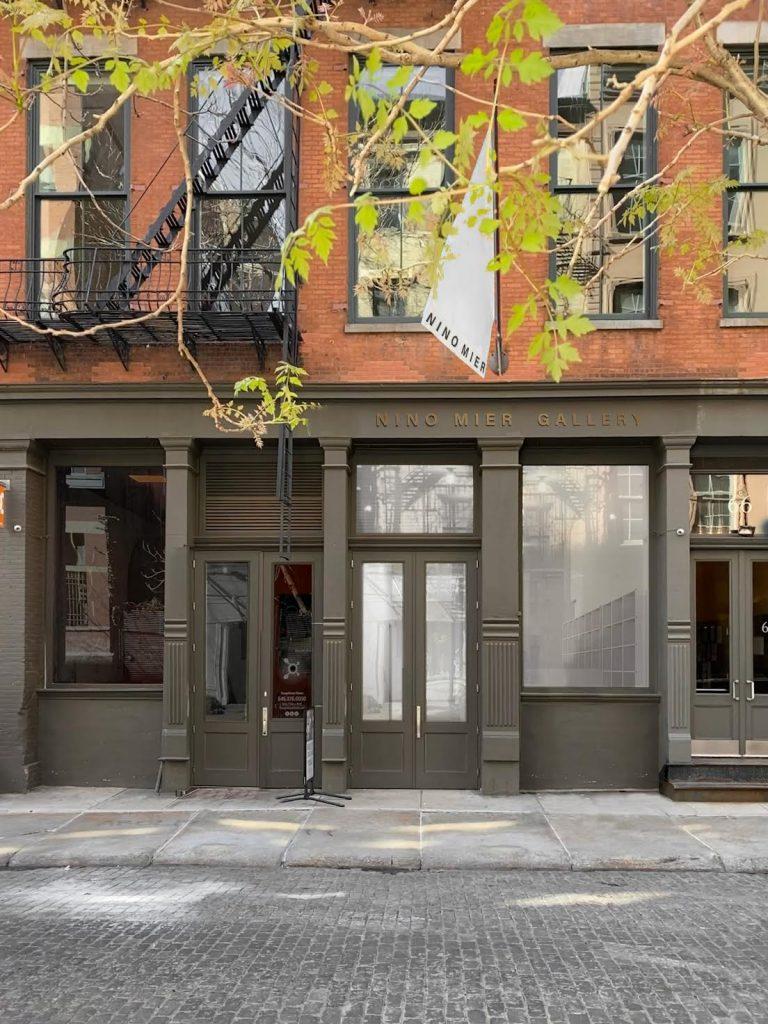 Mier’s story begins in Los Angeles. In 2007, he and his mother Esther—who had immigrated there from Germany with a 12-year-old Nino in 1992—opened a small catering company. (It would eventually turn into a series of L.A. sandwich cafés called FOODLAB before transitioning back into a catering company in 2019.) In its infancy, Nino would deliver the sandwiches by hand, often to luxury brands on Rodeo Drive such as Gucci and Prada. “I was the sandwich boy,” he declared to me.

He recalled to me his own Pretty Woman moment, which led him to know his own worth: “I remember somebody at Dolce and Gabbana didn’t let me [come sell the sandwiches]. They kind of shooed me away. That showed me something about my personality. I was like: ‘If you disrespect me, I don’t forget.’” By the time the sandwich shops were gaining popularity, someone at D&G eventually asked him to stop by. Nino’s response? “I will never come and stop by, ever.”

Moments like these that taught Mier his enterprising work ethic, drove his knack for rapid commercial expansion, and, perhaps most recognizably, gifted him the brash personality that’s come to polarize his peers.

Around 2012, once the cafés were successfully off the ground, Mier found himself getting bored, and would go to galleries after the daily lunch rush. He frequented the since-shuttered Cherry and Martin as well as David Kordansky and M+B, where he started collecting as a hobby.

Eventually, he joined the Hammer Circle, the Hammer Museum’s group for young collectors. Recognizing the opportunity within this ample pool of contacts, he got his start as an advisor. He’d put the 10 percent cut he’d get from sales into a savings account for his own collecting, and, eventually, for what would become his gallery.

He was good. He told me that he sold 40 Günther Förgs over the course of a year and a half at a time when German art wasn’t exactly trendy, making around $5,000 on each sale. “At some point I got $40,000 together,” he said. “In the restaurant business, you don’t make that kind of money. I was like, ‘Oh my god, I can buy a Günther Förg!’ So I did. That’s kind of how I built this thing.” 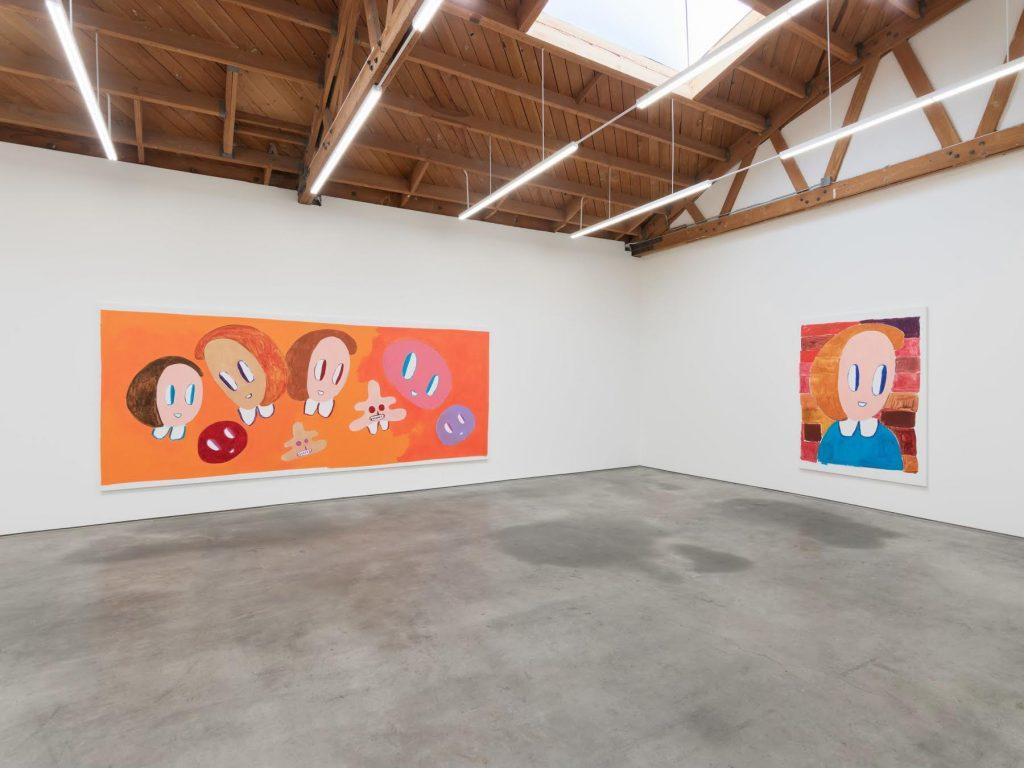 That “thing” started in an unoccupied marijuana dispensary on Santa Monica Boulevard, which Nino bought and transformed into his first gallery space, a block away from one of the cafés. The next year, he bought the space next door. The year after that, the space across the street.

The pace of one new space per year continued and Nino now owns a total of nine: five in Los Angeles, two in Brussels, a project space in Marfa, Texas, and the forthcoming gallery in New York. Along the way, he developed an eclectic roster that blends artists from his native Rhineland with Los Angeles talents he’s scouted.

But dogged ambition and meticulously orchestrated branding aren’t exactly unique enough to earn Mier his outsize reputation. Some off-the-record reporting reveals that part of this wheeler-dealer persona comes from rumblings that he flips paintings by buzzy young female artists at auction. Including that young female artist who has made so many headlines this year—oh come on, you know the one.

“What does Anna Weyant have to do with my gallery?” Mier said in response to my question about whether he consigned Ingrid With Flowers (2020) to Christie’s London this summer. The piece earned £403,000 (just under $500,000 adjusted to today’s conversion rate) on its £150,000 to £250,000 estimate, with a provenance listed as “Nino Mier Gallery, Los Angeles. Acquired from the above by the present owner.”

He adamantly denied that he was the consignor, clarifying that he did indeed buy it straight from the artist and added it to a group show, but then sold it to a client who brought it to auction. The same is true of a few other works that have his name listed on the provenance, he said.

While being a flipper comes with considerable baggage, so does to them. “If an artist is not with my gallery, I’m not committed to protecting that work,” Mier noted. “That’s the case with group shows, that’s the case with benefit auctions. Once that stuff is out there, it’s the Wild West. It’s very very hard to protect.”

Others had more positive things to say about Mier’s own collecting practices. Nicola Tyson, who currently has her first show with the gallery on view in Brussels, told me that he bought one of her pieces before deciding to work with her, and praised his “intuitive” working style. “It’s relaxing not having to explain myself or my work—he just completely gets it,” Tyson said.

Many of his artists seem to like that Mier is a straight shooter who enjoys giving artists opportunities.

One thing that Nino himself will say is that he’s changed in recent years, and is arriving in New York a different person than he was when he entered the Los Angeles fray. For that change, he credits his wife, Caroline Luce, who is a partner at Barbara Gladstone. “She’s just taught me a lot about how to take a step back and to focus on things that are more important, and that…not everything is a fight.”

Luce remains the only person he’ll take criticism from, and she has made strides in tamping down his instinct to lash out when he feels insecure. “There is no need to be such a contrarian and get in people’s faces all the time,” he said. “I think that comes from most likely an insecurity of coming from nothing and trying to punch your way up through this crazy art world, and you sort of think you need to be tough about it. You might not even have to be. There’s different ways to do it.”

It just may be that the New York chapter will finally help Mier change his reputation. After all, the very same dealer who made the comment about his shady dealings also remarked to me: “No one wants to see Nino fail. There’s enough room for everyone at the table.”