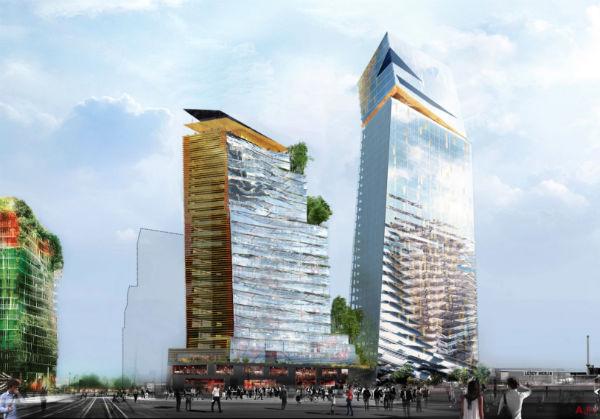 Did Paris just get a modern-day leaning tower of Pisa? That’s what some are billing the new Tours Duo, French architect Jean Nouvel’s shimmering inclined towers that have injected new life into a historic arts district in Paris.

Speaking to Dezeen about his desire to respond to the Left Bank area, Nouvel said, “It’s about building its summit, its culminating point for the beginning of the century. It is also about creating a character, a singularity that is in relation with the reality of the site, that reveals its particular beauty, that relies on it to invent and strengthen the attractiveness of the place.”

At between 28 and 39 stories, respectively, the twin towers cast a long shadow across the Left Bank, an area once famous for its artistic activity around the Montparnesse neighborhood.

The insides of the structures were designed by Philippe Starck, who brought a keen sense of lightness and form to a top-floor restaurant and bar, and gardens and green terraces. The buildings themselves, charmingly twisted choreographed into elements like glass and steel, glisten when seen from afar.

Starck, whose previous hotel interiors include La Réserve Eden au Lac Zurich, Lilly of the Valley in Provence, and 9 Confidentiel in Paris’s Le Marais neighborhood, is known for tranquil and open designs.

In a way reminiscent of city and urban planning in Zurich, Nouvel’s new building conforms to the wider surroundings, carved into an area alongside the Périphérique and facing a ring road and a large railway siding.

Paris, a city already spoiled in architecture, is also awaiting the completion of another project by Ateliers Jean Nouvel, the Hekla skyscraper in the La Defense area. Meanwhile, Herzog and de Meuron recently announced that construction was set to start on its Tour Triangle scheme, while Paris’s tallest building, the Tour Montparnasse, is currently undergoing much-needed renovations of its own.

Léo Caillard Presented the Sculptures ‘Heroes of Stone’ in The Louvre

Did This Famously Beautiful 19th-Century Countess’s Artfully Posed Self-Portraits Pave the Way for the Contemporary Selfie?