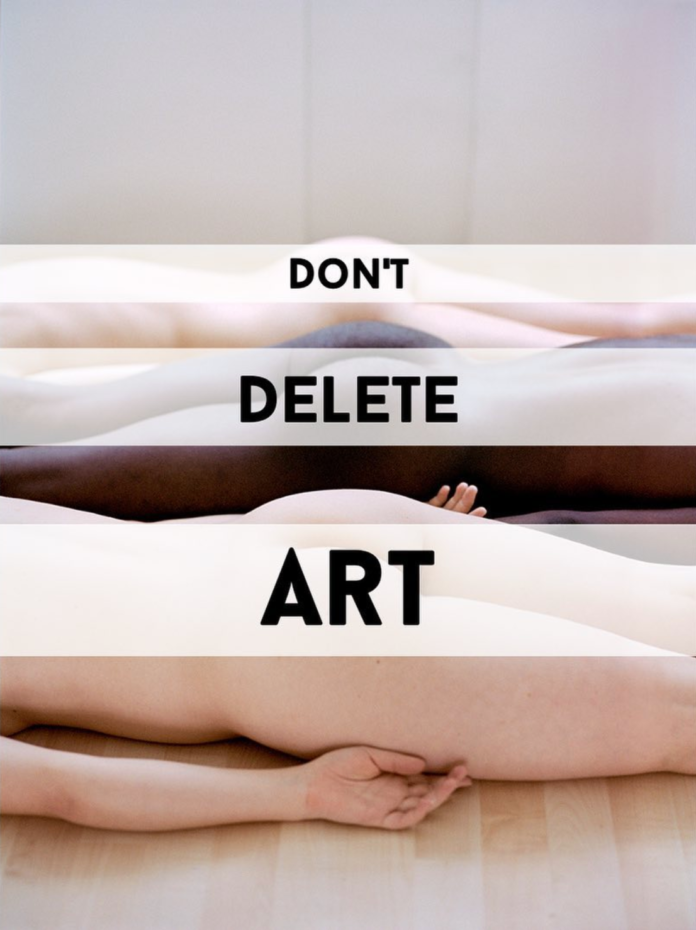 “Instagram has a problem and I think I know what it is,” stated the artist Betty Tompkins in a letter read aloud at Facebook’s Manhattan headquarters in 2019. In June of that year, Facebook had finally agreed to meet with artists about what then appeared to be a relatively simple matter of equal treatment of artistic images. The “problem”, Tompkins wrote, was the platform’s inability to follow its own guidelines allowing for nudity in art.

Following years of complaints, protests, and petitions by artists who had become increasingly frustrated with the platform’s removal of art, the announcement of the meeting itself was seen as a win. Twenty artists and curators were invited to Facebook offices in New York for what was anticipated to result in a “reconsideration” of their guidelines, and many artists believed they would finally be listened to. Now, three years later, Facebook changed their name to Meta, but the “problem” Tompkins pointed to remains unchanged. The glimmer of hope that Facebook might “reconsider” their treatment of artists is now widely acknowledged to have been nothing more than the glint of the gaslight.

Since the meeting, artists have continued to battle against Meta’s punitive approach to nudity. Artists and activists argue that the platform’s guidelines perpetuate sexualisation of the nude body, a claim which has only been exacerbated lately as artists have received notice of “Adult Sexual Solicitation” in place of their familiar “Nudity” violations. This escalation from ignorance to accusation has alarmed many, and meant that artists are now not only trying to defend their subject matter, but the premise of their practice. Tompkins’s letter lambasting the social media giant for exercising discriminatory subjectivity, disregarding their own rules, and censoring art is still relevant today, and it is all the more problematic as Meta hurtles towards the Metaverse and NFT markets.

In a leaked memo, Meta’s Chief Technologu Officer, Andrew Bosworth, expressed the desire for “almost Disney levels of safety” in the Metaverse, but further news on how Meta’s guidelines will be applied there is lacking. Furthermore, Instagram has announced that they intend to enter the NFT market, and allow users to make and engage with NFTs in an as-yet-unknown capacity. Both these developments have left artists in the lurch with only the concern of further censorship. If we can take a clue from the last three years, it appears that Meta has little interest in listening to artists, and are in fact setting the stage to remove those artists who do not conform to their aspired “Disney levels” of content.

If Meta’s current limitations on what counts as “art” mean that some artists cannot partake in these new opportunities, it also means that Meta would be advancing from limiting artists’ reach, to barring them from actively engaging in major aspects of the art market.

The lip service Meta’s guidelines pay to artists is still just that, years after Betty Tompkins’s letter was read in their infamous meeting. Asked about her letter now, Tompkins says: “I would say the same thing.”

Emma Shapiro is an American visual artist and body equality activist based in Valencia, Spain

In a Series of Experiments, Viewers Preferred Works by Women Artists—But Assumed Works by Men Were More Famous and Valuable