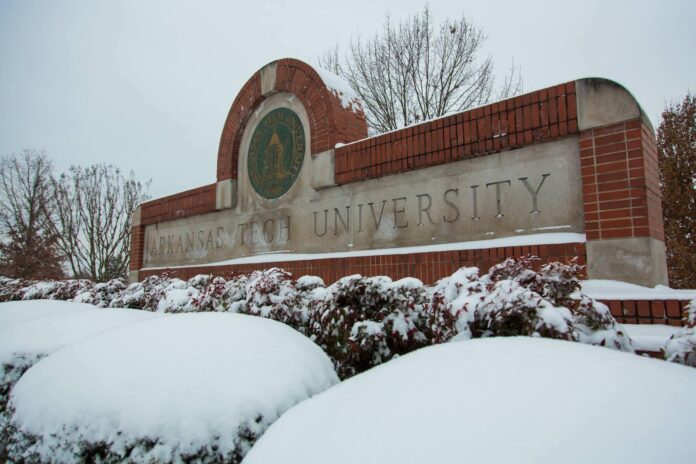 On Martin Luther King, Jr. Day (16 January), more than 300 Arkansas Tech University students marched silently through their campus in Russellville, Arkansas in both celebration and protest. Many students at the university took issue with an exhibition on display at the Normal Hall Art Gallery on campus, deeming its contents “racially insensitive”, and used the march in part as a forum to protest the work on view.

The offending piece in question was by artist Dominique Simmons, a mixed media sculpture called Klan Bride—an eerie, grotesque portrait depicting a cadaverous figure draped in a translucent Confederate flag. In the wake of the march, Simmons requested that Klan Bride and other pieces of hers be removed from the gallery, closing the show as a result.

In an interview with ABC7, the president of the school’s African American student association, Jace Bridges, described the university’s decision to display the work at a campus art gallery as “calculated”. “Why is it here, why did the artist choose to make it, and what does it really mean for anybody?,” he asked. “Seeing it and reviewing the artist statement, it didn’t seem like it belonged here”, he said. “I think they could’ve done better and I think they’re focusing on protecting the wrong party and I think they’re focusing on reassuring the wrong party”.

Others have framed the protest and the artist’s decision within the context of ongoing debates about freedom of speech on university campuses. Kristen Shahverdian, the senior manager in the Free Expression and Education programme at PEN America (a non-profit advocating for free speech), said in a statement that the decision to shutter the show “deprives all students and campus stakeholders of the opportunity to view this art and grapple with it”. She adds, “How can we reckon with America’s history of racism and racial violence if our institutions shut down opportunities to use the arts for public engagement?”

Shahverdian and the Arkansas Tech University protesters agree on one significant point, though: the university’s administration should have done more to contextualise the work and create a space for dialogue. “Cultural managers, particularly at academic institutions, have a responsibility to curate artistic content for the public in ways that are attuned to how it might be received—particularly when it touches on a potentially sensitive topic,” Shahverdian said.

Aside from requesting her work’s removal, Simmons—a white artist based in Little Rock—has not made public statements about the work’s meaning or removal.

Did the National Gallery Botch the Restoration of This Italian Renaissance Nativity Just Before Christmas? Judge for Yourself

Clearing Gallery Has a Knack for Elevating Unknown Artists Into Blue-Chip Stars. Now, It Just Needs to Figure Out How to Grow With Them