Home News Venice Biennale 2022: the worst art on show in the city 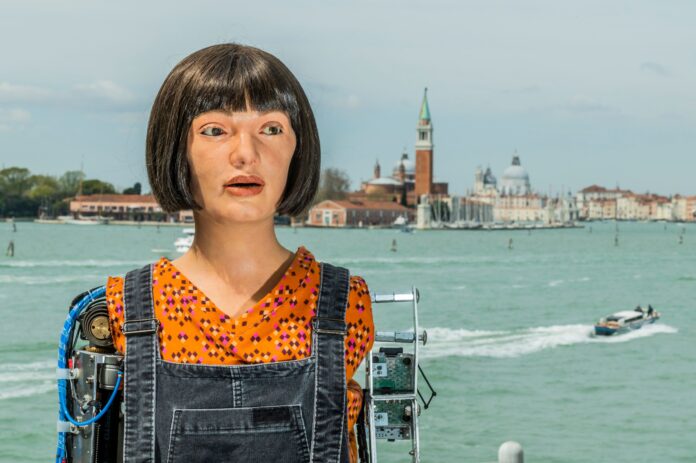 Leaping into the Metaverse, Ai-Da

Where do you start with art produced by a machine rather than a human? The AI robot Ai-Da is almost as ubiquitous as Hans Ulrich Obrist on the art scene, popping up in prime art hotspots such as the Venice Biennale this week. Ai-Da has been given a new painting arm, resulting in an “astonishing new painting ability”, a press statement says. But her clunky self-portraits and Immortal Riddle sculpture still look like they were made by, well, a robot. The statement adds that “Ai-Da has no life or sight”—that is glaringly obvious from the art on display.

In a Biennale dominated by women artists in the Giardini and Arsenale, the presence of male artists screaming from Palazzos (seemingly from a bygone era) provides a jarring counterpoint. Sterling Ruby’s giant relief sculpture HEX, splayed across the historic façade of the Palazzo Diedo in Venice ‘s Canareggio district is just a representative example. We are told that it “interrupts the classical architecture with a sense of precarity”. The title “Hex” refers to the geometric star emblems “hex signs” appearing on the sides of Pennsylvanian Dutch barns. Who knew? The Palazzo will be the new permanent home of the Beggruen Arts & Culture centre, following the palace’s recent restoration, with Hex announcing Ruby’s inaugural residency. Will these male outliers in Venice still cast their spell on visitors?

The Spanish Pavilion closed without giving a reason this morning—the dour gatekeeper staring out behind metal bars, informing hopeful art goers shivering under umbrellas they shalt not pass. Yet a crowd remained, dutifully waiting for entry to Ignasi Aballí’s representation of the joyous Spanish nation at the 2022 Biennale.

Once inside, they will find Corrección, an installation that attempts to fix the historical architectural “errors” found in the pavilion, rotating its walls by ten degrees. The artist demands we “reconsider” the space.

The error, perhaps, was the idea itself, which, to put it mildly, is indulgent, boring and pretentious. Once the wet hoards have shuffled through the show, they will likely wish on Aballí a stay in a correctional facility—for crimes committed in the name of conceptual art.

The British artist Marc Quinn has attempted to sum up viral moments from the past couple of years in the exhibition HISTORYNOW, which lines the walls and ceilings of the Museo Archeologico. Screenshots from social media—showing images such as Donald Trump, the storming of the Capitol, a scantily clad Rihanna and a Ukrainian woman with her newborn—have been replicated on giant phone-shaped canvases measuring more than 2m, which have then been daubed and splashed with paint.

It would be kind to call these works kitsch, but kitsch can have layers, humour and depth of meaning—these seem to compress historical moments into decorative wallpaper for a Miami mansion. And despite the images being in the public domain and often of people who crave publicity, there is a sense that they are being exploited for someone else’s spectacle. Not even Trump deserves this treatment.

TOTEM, the new exhibition by Hong-Kong artist Wallace Chan, should work—at least for those into shiny things. The setting is Fondaco Marcello, a 15th-century warehouse by the Grand Canal which houses Chan’s massive titanium sculptures of Buddhist iconography. The warehouse, was chosen, Chan said in an interview with TL magazine, for its “poetic beauty”.

But Chan, for some abstract reason, has decided not to install his exhibition as he initially intended—something about wanting to reflect his “curiosity about life, nature and the mysteries of the universe”. Instead, he decided to “just leave it unassembled, so as to address the idea of fragmented reality and uncertainty.” The result is collection of works strewn around the warehouse floor in a mess of blasphemous bling that looks like giant trinkets stolen from Venice street hawkers.

Correction: This article originally misinterpreted a quote from Wallace Chan referring to the exhibition’s lighting. This has since been amdended.

We Walked the Earth, Uffe Isolotto

Uffe Isolotto’s “transhuman” installation for the Danish pavilion presents a spectacle that is disturbing and yet ultimately mystifying, failing to deliver any ideas to match the high-spec visuals. There is no denying the cinematic quality of the pavilion’s larger than life protagonists, a pair of hyperreal centaurs realised by a team of taxidermists, zoological model makers and prosthetic makeup specialists. But why are they here?

A trigger warning outside the pavilion advises visitors of “sensitive content, including scenes of life and death”. Sure enough, the male centaur hangs from the ceiling by a noose in a dingy chamber. His female partner lies in a farmhouse stall across the way, impassive in the act of giving birth. Mysterious glassy pods litter the floor and one room is inexplicably devoted to a hanging “mutant” leg of ham. No one seems any the wiser, with the most common reaction being a quick gawp and a photo opportunity, before hurrying out through the exit.