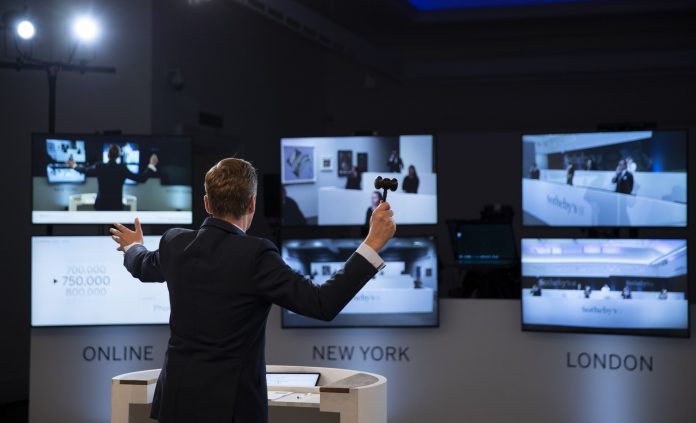 This result was shown in total by five “day” and “evening” online auctions held on June 29 and 30, 2020. The series of five auctions, which ended on June 30, was the most successful among online auction trading this year.

During the auction, 85% of the lots went into new hands, and the total amount of transactions exceeded the figure of $ 430 million. All auctions were held in real-time remotely. The lead bidder was in London, and telephone bets were accepted by auction house experts in London, New York, and Hong Kong. In addition, bidders had the opportunity to participate online.

The top lot of this series of auctions was Francis Bacon’s Triptych Inspired by the Oresteia of Aeschylus, sold at the Contemporary Art Evening Auction on June 29. The lottery was attended by customers of the auction house in Hong Kong and New York who made bets by phone. In 10 minutes of the dramatic struggle for the lot, they were able to bring its price beyond the upper estimate, and as a result, the triptych, tentatively estimated at $ 60-80 million, was sold for $ 84.6 million.

Another achievement on June 29 was the 100% sales result of the works of women artists exhibited at three auctions. So, The Ginny Williams Collection Evening Sale brought a total of more than $ 65 million and, showing another example of a flawless result for auctions from the one owner sale category, stood in line with auctions such as the sale of Rockefeller or Elizabeth Taylor collections.

As for the artists of the orbit of Russian art, the highest result was achieved by the work “Green, Blue, Green” by Mark Rothko, sold at the evening auction on June 29 for $ 8.35 million.

On July 2, the baton of Sotheby’s in the evening auction of contemporary art was picked up by the auction house Phillips.