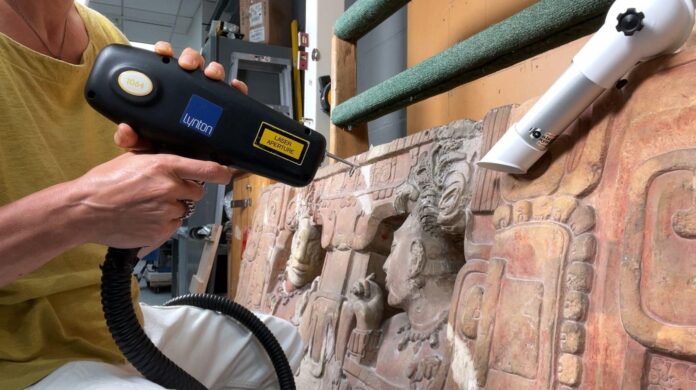 An ancient Maya throne that travelled to the Metropolitan Museum of Art in New York for conservation and to feature in a loan exhibition was wrongfully exported and should be returned immediately, according to a public letter signed by the Guatemalan Collective for the Defence of Heritage and others.

The organisation and Indigenous Guatemalan communities say that Guatemalan law prohibits the export of such artefacts for exhibition, and that the Guatemalan government is breaking the country’s own law by allowing works to be shown outside Guatemala for any length of time.

The Guatemalan government had agreed to a legal exception for a reciprocal loan agreement with the Met, which contained a series of separate agreements relating to the conservation and exhibition of works. Officials granted a rare temporary export authorisation as part of the deal, after which the eighth-century Throne I and a second artefact—a panel of the same period—were transferred to the New York museum in August 2021 by the Museo Nacional de Arqueología y Etnología in Guatemala City specifically for expert restoration.

The Guatemalan government and the Met argue that the collaboration promotes the preservation of cultural heritage. Both works are on display in the exhibition Lives of the Gods: Divinity in Maya Art (until 2 April 2023), after undergoing conservation, and will return to Guatemala when the show closes next year.

The four-legged throne, which required more restoration than the panel, is considered a masterpiece of Maya art because of its unique reliefs and hieroglyphics. Throne I arrived at the Met sullied with a thick film of dust and unceremoniously mounted on a concrete wall. Epigraphic studies also revealed that the throne’s front legs had been reassembled backwards following its excavation in the 1930s by archaeologists from the University of Pennsylvania in the ruined city of Piedras Negras, north-west Guatemala.

The conservator Carolyn Riccardelli, who oversaw the restorations over the course of eight months, says the Met worked closely with Guatemalan officials and Maya communities throughout the restoration process. “It was a reciprocal agreement, and we made proposals ahead of every step to ensure that we were all aligned in our aesthetic approach,” she says. “We did that because ultimately it’s their work, and their project.”

In its renewed and improved form, the throne has been fixed to a steel base, inconspicuous plaster filaments have been used to fill any gaps in the structure, and contactless laser cleaning has revealed a vibrancy of red hues unseen for decades.

“The future of archaeology, conservation and art history is very much rooted in collaborative projects,” says Joanne Pillsbury, the Met’s curator of ancient American art. “Collaborations between institutions should be seen as opportunities to expand empirical and theoretical knowledge.”

Did the National Gallery Botch the Restoration of This Italian Renaissance Nativity Just Before Christmas? Judge for Yourself