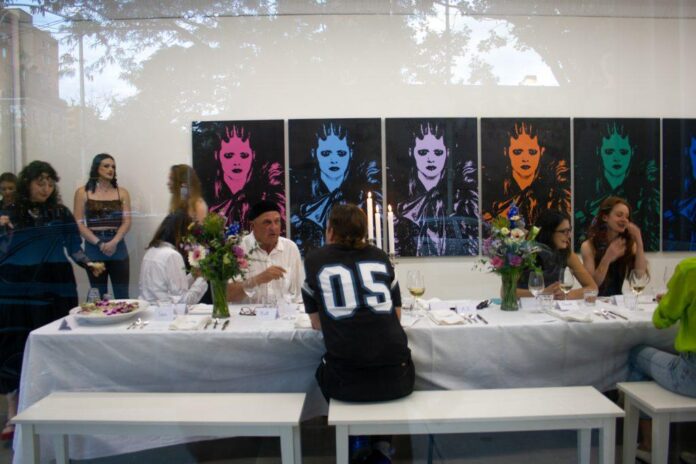 Real estate in New York City routinely flips an old adage on its head—if you abandon it, they will come. Most visibly, this was true of the Lower East Side in the 1980s, where artists like Jean-Michel Basquiat and Andy Warhol were able to find cheap rents, due to the state’s neglect of an area devastated by the crack and AIDS epidemic. A smaller version of this has cropped up just under a mile away, at the corner of Pike and Henry Street, where savvy dealers have formed an enclave of low-overhead, high-energy galleries.

“I’ve only been here a year, but it’s grown so much in that it’s really crazy,” Leo Fitzpatrick, the owner of Public Access, told me on a recent afternoon. Fitzpatrick settled into his space on Henry Street just over a year ago, on a block that was largely made up of untouched storage spaces and apartments abandoned during the pandemic. “I didn’t think about how much money I could make, I thought about how much I could afford to lose,” he said (though, to be fair, Fitzpatrick does maintain a day-job at the skate-brand Supreme).

Fitzpatrick, and many of his neighbors, pay $3,000 a month for their storefronts on multi-year leases signed during the peak of the pandemic. This narrative of scrappy young dealers who sank their teeth into Manhattan during at an opportune time and didn’t let go is mostly associated with the TriBeCa scene. From conversations with dealers in the area, it seems like those on Henry Street are taking the less-commercial, more experimental approach than their colleagues across Broadway. 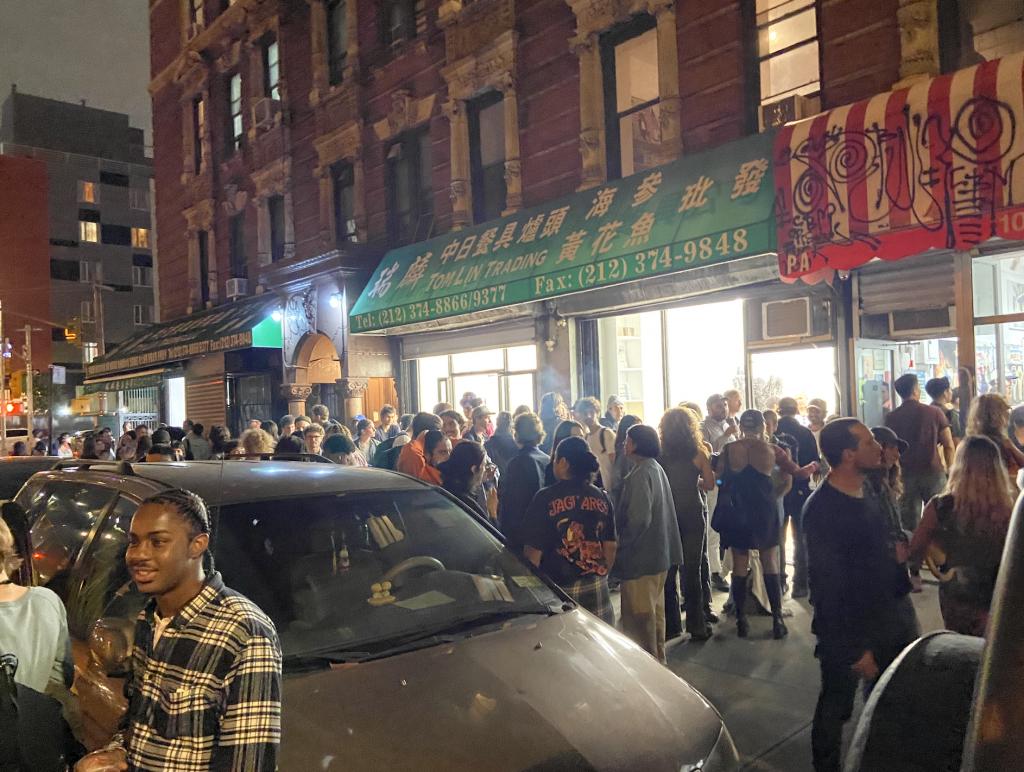 The scene on Henry Street during the first week of September, when the corresponding galleries all hosted their openings on the same night.

“I don’t belong in Tribeca. I have a lot of friends over there and I go and support all those galleries, but this is more my vibe,” said Fitzpatrick, who curates around the interests of the nearby skate crowd, a demographic he is familiar with since he was first discovered as an actor by photographer Larry Clark in the 1990s for the movie . At Public Access, he’s put up a show of a cut-up photo book by Christopher Wool; quarters with conspiracy theories burned onto them by Ben Werther for $100 a pop; and a comprehensive painting show by Steve Keene.

Just to the left of Public Access, Casey Gleghorn opened No Gallery just a few months before Fitzpatrick came to the block, identifying it as an “ambiguously commercial art gallery.” He had moved the gallery across the country; after a shaky start in Los Angeles across the street from David Kordansky, Gleghorn found his footing in Chinatown.

“What I learned from L.A. was to keep my overhead as low as possible. I don’t need a big space to be taken seriously,” Gleghorn, explained. He signed a three year lease for No Gallery with his rent under $30,000 a year. “My goal is, when someone walks into my gallery, I don’t want them to forget the show five years from now or a month from now. I want them to be like, ‘Oh my god, remember that show where they had live eels, and they slaughtered the eels, and they ate ‘em?’” he explained, referring to his recent exhibition of work by Jenyu Jenyu, where he did just that.

During Armory Week, a vast majority of the galleries on Henry Street had openings planned in conjunction with each other, bookended by ATM Gallery and Housing. What happened in between was nothing short of a street party: Mobs of people showed up for the event, which featured a rented ice cream truck from ATM Gallery and free-flowing booze. The evening also hosted the debut for two new spaces: www., a jewelry store and gallery run by artist Will Shott, as well as David Fierman’s new space on Pike Street. The art dealer’s previous space on Henry Street is now the cooperative gallery Diana, which is run by Fierman alongside Dubai’s Carbon 12 and Vancouver’s Macaulay and Co. Fine Art. 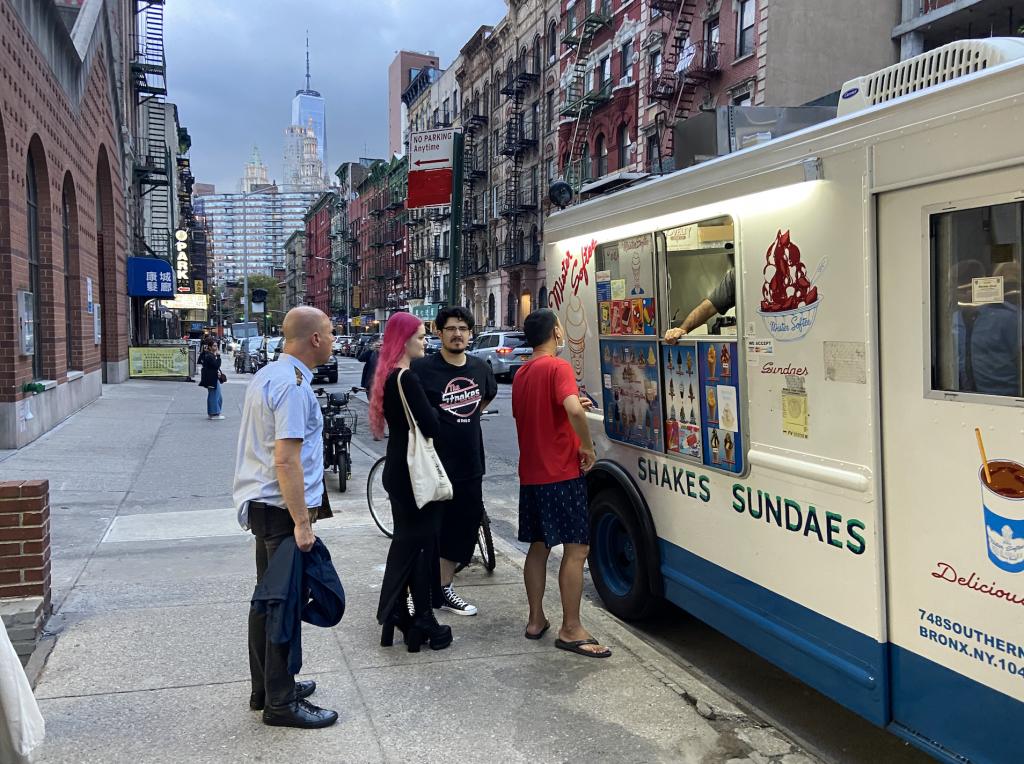 Gallery-goers at the ice cream truck that ATM Gallery rented for Henry Street’s joint evening of openings during Armory Week.

I spotted veteran dealer Jeffrey Deitch there, who dutifully stopped into most galleries on the dogleg left of Henry and Pike. Later, over email, Deitch told me the scene reminded him of Tenth Street in the East Village in the early 1980s. “It was a spontaneous street party,” he said. “The storefront galleries do not have to be large and elaborate to present exciting new art. It was great to see the community that has formed around the Henry Street galleries.”

This energy certainly doesn’t just come from the newcomers on the block. An early champion of Henry Street is Ellie Rines, a name closely associated with guerrilla sales tactics and lively programming that attracts both the downtown and uptown worlds. Her gallery, 56 Henry, recently expanded to include the space smack-dab on the corner between Henry and Pike, more than doubling their square-footage.

“When I opened here, I had no idea it would turn into this, it was just what I could afford,” she explained to me on the recent opening night. “I’m really grateful.”

Rines moved in to 56 Henry as a live/work space in 2016, back when Chapter and Bureau still had their first spaces nearby. From her perspective, the evolution of the neighborhood has been subtle, and marked by a respect for the history of Chinatown and its population.

“There are more galleries, but what’s nice is that the Chinese community owns the buildings, so there hasn’t been too drastic of a switch-over,” she said. “Most of the galleries have been pretty respectful of their surroundings and haven’t tried to make their gallery into a Chelsea space.”

She added that her current rent of $3,500 hasn’t changed much since she first came to Henry Street. “It’s a place where you can be a little bit more experimental,” Rines said. “People haven’t broken down the walls. They’ve moved into their spaces instead of trying to take it over.” 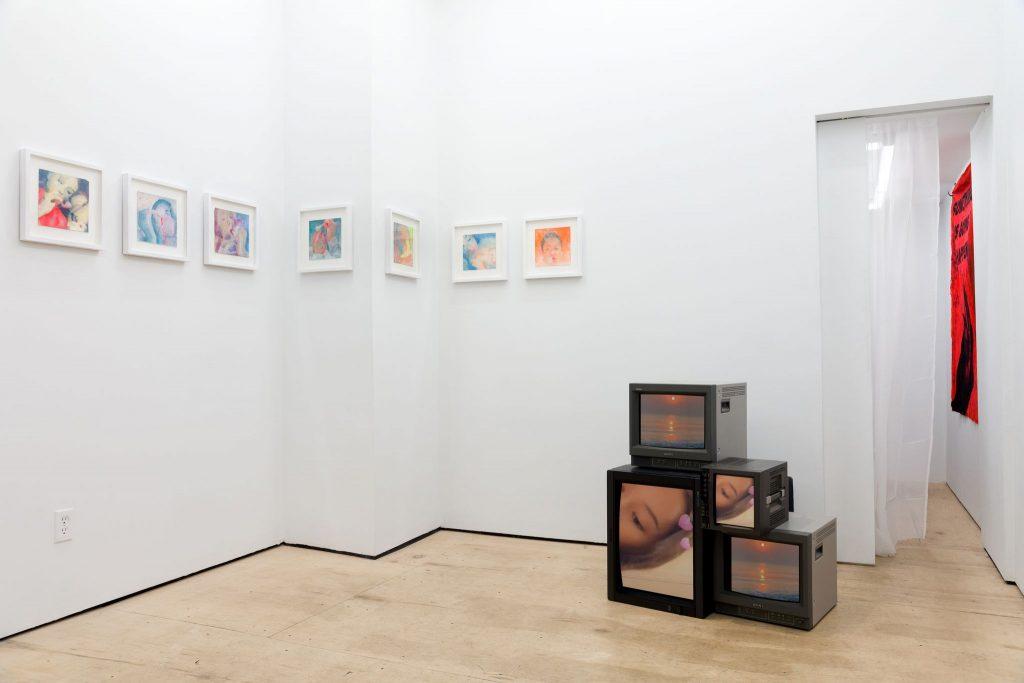 Install of Allan Gardner’s “Indifferent Stars” at No Gallery. Courtesy of No Gallery.

It’d be nice to end this story right here, and have this be a bastion of hope for a new art-dealing generation. However, other gallerists haven’t been as lucky with securing such cheap rent in the area. According to Gleghorn, rents in the area are already rising, and he forecasts that when his three-year lease expires, he could plausibly see it doubling, citing other vacant lots on Henry that are asking for $7,000 a month. “It feels a little like, tick tock,” he said. “I’ve been coming to NY long enough to see these things come and go, and then all of a sudden, you’re Soho.”

More optimistically, Rines acknowledged that this will always be a risk in New York City. Asked whether she’d ever leave Henry Street, she said: “New York is always changing, and thats the excitement of the place.”